A lift to prosperity 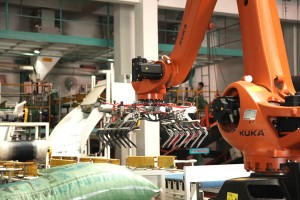 Last year, KUKA established a new robot assembly plant in Shanghai, making it the company’s second production base outside Germany. This plant will supply products of world-class quality in accordance with the highest standards in Germany. Moreover, through intensified technological training, KUKA is planning to develop tailored products locally to meet the specific demand in China.

Palletising has traditionally been a labour-intensive segment in the automated logistics system. With the upgrading of industries and wider application of automation, an increasing number of robots are now replacing human labour as a vital force in palletising. As a result, industrial robots of high performance and quality have become the first choice for enterprises to achieve better productivity and enhance product competitiveness.

Mobile and agile
In a spacious workshop, fodder bags coming from the assembly line are swiftly placed in uniform stacking patterns (three by two units on eight layers) which are later forklifted to different freight sections. Everything goes on in an orderly, accurate and smooth manner. This is the working scene at the palletising site of Liuhe Rongda Feed Co Ltd, a subsidiary of New Hope Liuhe Co Ltd in Shandong Province, China. The leading star at the site is a highly mobile and agile orange-coloured robotic picker from KUKA, the world-leading supplier of industrial robots. With the productivity growth, the production process has been automated as well as calling for the logistic control. Therefore, industrial robots, especially those of high-quality brands, are making their way into enterprises on the back of a series of advantages. According to New Hope Liuhe Co Ltd, KUKA KR120 R3200 PA (KR QUANTEC) palletising robot is faster, more stable and more precise than competing products.

"KUKA’s robot systems are adaptable to extremes, from a deep freeze of -27°C to the heat of 60°C"

With ingenious structural design, high stiffness, excellent continuity of motion and fantastic acceleration, the robot is ideally suited to various palletising requirements and can effortlessly stack payloads of 120kg to designed heights with a reach of 3,200mm. Notably, the robot can palletise 1,300 40kg fodder bags within one hour, making it the most efficient palletising robot in China compared with other, similar types of robots.

KUKA can handle 240,000 tons annually, which would far exceed the productivity of workers, even outperforming several employees working around the clock. In this case, the cost might be recovered within just a few years. In this sense, the palletising Hercules not only picks up products, but also lifts the company to prosperity.

The KUKA KR120 R3200 PA (KR QUANTEC) palletising robot is fast, stable and precise
Feeding demand
New Hope Liuhe Co Ltd is one of the leading agricultural groups in China, with total assets of more than 20 billion yuan ($3.2 billion), over 70,000 employees and almost 500 subsidiaries. In November 2011, the company obtained approval from China Securities Regulatory Commission for reconstruction of farming and animal husbandry assets. Now it is estimated to produce 20m tons of forage per year (ranking number one in China). The company is opting for advanced production facilities to meet this growing demand.

According to Shandong Johenndar Machinery, KUKA’s system integrator, the palletising system installed in Rongda Feed Co Ltd consists of world-class products from leading manufacturers such as KUKA, making it the best-equipped system in the industry.

Adapting to extremes
Designed for a wide variety of applications, KUKA robots are adaptable to extreme work environments thanks to the frost-proof property of its control cabinet. KUKA’s signature robot systems such as KR120 and KR180 are applicable even in harsh work settings like dust and mist. From deep freeze settings as cold as -27°C to environments as hot as 50-60°C and in high thickness of insect dust, KUKA robots demonstrate consistent performance in whatever harsh environment, helping customers to solve the difficulties encountered in manual operations.

High reliability
Solely powered by gear drive, KUKA robots have an MTBF (mean time between failure) of 75,000 hours and an MTBM (mean time between maintenance) of 20,000 hours. Therefore, it is showing greater stability than the palletising systems featuring either chain drive or tooth belt drive that are vulnerable to wearing in high-load and high-speed conditions. Tooth belts need frequent maintenance to avoid wearing as it is made of plastic which is prone to ageing, resulting in sacrificing precision during the maintenance time. Powered by gear drive, KUKA robots can ensure maximum stability and efficiency thanks to the negligible wearing of gears.

Extreme precision
In the case of Liuhe Rongda, the KUKA KR120 R3200 PA (KR QUANTEC) shelf-mounted robot it used weighed 1,075kg, with a payload of 120kg and a supplementary payload of 50kg. 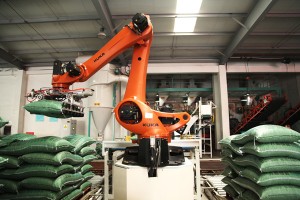 Cutting-edge designs and technologies from KUKA Robotics
Yet the palletising Hercules has a repeatability of merely ±0.06mm, ensuring high precision in package lifting and palletising in consistent stacking patterns. Such precise, consistent and standardised performance leads to higher efficiency in the storage and transportation process. All these are enabled by the cutting-edge designs and technologies from KUKA Robotics. In addition, KUKA provides customers with high-quality and efficient aftersales service. With over 40 years of proven application record in Germany and throughout Europe, KUKA is bringing not only world-class products but also a whole set of system solutions to Chinese customers via its local branch, KUKA Robotics Shanghai Co Ltd.

“We have long been committed to the research and production of industrial robots,” said Mr Zou, chief operation officer for KUKA Robotics China. “The next-generation KUKA robots aim to make automation simpler, easier to operate and safer in production and operation, thus opening up new horizons for customers.”

Customised solutions
With the demographic dividend in China gradually disappearing, automation is increasingly indispensable to the automatic logistics control from manual handling, palletising, to product loading. Many newly established industrial companies such as feed producers, flour mills, and chemical plants have integrated palletising automation into their plant design. For existing facilities, KUKA also provides tailored robot systems to meet customers’ needs for equipment upgrading. The demand for industrial robots is growing rapidly as more and more companies realise that advanced equipment is essential for them to improve their competitive edge. In China, the installed base of industrial robots increased dramatically from 550 in 1999 to around 75,000 in 2011.

It is predicted that China’s demand for industrial robots will rank the first in the world by 2014 thanks to the continuous upgrading of traditional industries and development of emerging applications. KUKA’s palletising robot, one of the versatile applications of KUKA solutions, will meet the booming demand and help fuel the growth of the manufacturing industry in China.