If there was ever a ‘Cinderella’ technology that has suffered at the hands of tough economic times, it is the automated guided vehicle (AGV). Unmanned, remote-controlled material handling by AGV was mooted by many as the answer to speeding up production through accurate and timely pick up and delivery of parts in the logistics process, while interacting with all elements of production, particularly assembly.

As demand for production has fallen and plants have downsized, so the AGV has come to be seen as a luxury more than a tool for increasing efficiency. After all, as a plant manager, would you rather keep fork truck and tugger train operators or lay them off to invest in what is a very expensive piece of equipment?

On the other hand, the growing demand for lighter, more fuel-efficient vehicles, that must be made on existing lines, has caused a fundamental change in the way many car makers view the need for line flexibility.

The sheer number of variants that an OEM must be prepared to make, often in an existing, older facility, means that AGVs are a very smart solution to handling complex and constantly changing inventory. At present, typical AGV applications in the automotive industry include automated raw material delivery, automated work in process movements between manufacturing cells, and finished goods transport. AGVs link shipping and receiving, warehousing, and production; with just-in-time part deliveries that minimize lineside storage requirements. They can also help create the fork-free manufacturing environment that every plant in the automotive industry is seeking. Ask any plant manager/process planner and he will tell you that fork trucks are the most dangerous and space-hungry pieces of equipment, but they also tend to be a necessary evil, used for shifting the heavier loads found in body-in-white and powertrain.

Julian Hetherington, Director, Land & Strategic Asset Development at Jaguar Land Rover says JLR’s shifting manufacturing base and need for flexibility has so far ruled out AGVs, since the cost is high and the flexibility low. “AGVs have traditionally had tracks laid in the plant floor for their guidance and this would not suit our need for flexibility,” he says. “Ideally we would use laser or radioguided AGVs, but the high cost is also an issue – we would like to see this come down.”

Gary Cowger, who heads up manufacturing for General Motors, says GM has had mixed results with AGVs in North America, outside the traditional European usage base. “We went through a period of using them,” he says. “I think we misused them in bodyshops and heavy processing where they were not the best solution. In the correct applications, AGVs can be very useful – in driveline transport and shifting material delivery systems at point of use. There you can use very low cost AGVs and get the best from them.”

Automated guided carts or AGCs, have also found favour with volume carmakers. These run along very much more fixed routes, often effectively becoming an unmanned ‘milk run’ vehicle that can have different carts attached to the power unit to deliver various components to various elements of the production line. Cowger again: “The application of simple, low-cost AGC technology allows for a lean, more efficient material delivery and transfer system to transport material to the production lines.”

To get an idea of what would be involved in specifying and installing AGVs in a plant, AMS spoke to Yves Gazin, Concept Manager at Egemin Automation, a global supplier of factory automation solutions. 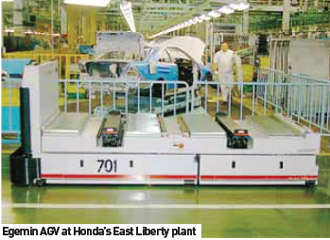 Conveyors on AGVs and supply lines are non-driven; the containers are pulled from and pushed to the supply conveyor via a special system mounted on each AGV. Other contracts have included 30-unit load AGVs for Chrysler, two-part transport tugger vehicles for Ford in the US, and one AGV for the Toyota line at the NUMMI plant in Fremont, California, as well as several suppliers including Vredestein, Netherlands (21 AGVs), Bridgestone US, and Danish exhaust system maker, Dinex.

AMS - How quickly is a typical application put in place - from RFQ to up and running?

YG - This depends on the complexity of the system and the customer situation. Typically, somewhere between four months for very basic systems, and up to nine months for very complex systems.

AMS - How does Egemin ‘mesh’ its control systems with the customer’s existing IT, ERP etc., systems?

YG - We can interface with practically any existing host system or ERP. Over the years we have developed a series of standard interfaces. When the system is ‘custom’, we customise our interface.

YG - We always select the guidance system to be the best fit for the application. Wire technology is reliable but has seen less implementation the last five years due to the impact on the environment (floor cutting and carving). Strip is very old and typically not used in industrial environments. Most of today’s applications are either laser or magnet guidance, about evenly distributed between the two technologies.

Laser technology is the most flexible, simplest and quickest to install and is thus most popular.

AMS - What is your opinion of broadband installations?

YG - The broadband (WiFi) communication system allows for sending commands from the central control software to the AGVs in the system. This allows for the greatest flexibility in programming of AGVs and layout downloading is now the most commonly used radio method (as compared to narrowband). Signals are sent via as many radio frequencies as possible, so there is less chance of radio interference.

AMS - What about automated truck loading/unloading?

YG - Automatic truck loading and unloading systems are part of our AGV product portfolio. A trailer can be unloaded (or loaded) through a series of predefined unloading sequences. The AGV autonomously looks where the loads are located in the truck, picks them up and drives them to the right location; on the line, in the warehouse (with or without racks), to buffer stock, etc. The system works no matter what type or position of the trailer, when unloading dock or dock leveller, nature of the load (pallet size, reel size, etc.), and with full safety (before going into the truck it checks to make sure no one is inside).

AMS - How do AGVs recharge themselves?

Control systems – the devil is in the digital

In theory, AGVs can address all these challenges and oust the fork truck forever; the key is in the control systems. The heart of the latest AGV control systems is often an on-board PC that runs the navigation software required to guide the vehicles throughout the system. A sophisticated control architecture will support laser, inertial, magnetic or wire guidance, or a combination of these on a single vehicle.

Added to this is the necessity for the control system to mesh with the existing IT environment. It needs to be fully compatible with all pre-existing ERP packages, operating software and schedulers, and it needs to be able to receive orders directly from the ERP system.

While it may seem that these demands are best met when building a new plant, one great advantage of AGVs is their flexibility; because there are very few fixed installation demands, control systems can be added on to existing networks. Where AGVs are being introduced for the first time, wired (or wireless) installations can often be made during a weekend or over short production breaks.

This is in stark contrast to almost any other type of material handling system (outside of fork trucks), where lines must be re-designed or freshly installed. And with the proliferation of laser, radio signal and inertial guidance systems, the plant manager does not even have to consider the disruption of disturbing concrete floors to install magnetic strips or wires for the AGVs to follow.

At the Porsche car factory in Zuffenhausen, on the outskirts of Stuttgart, Germany, 16 magnetically-guided AGVs (automated guided vehicles) link the automated components storage with the production floor. 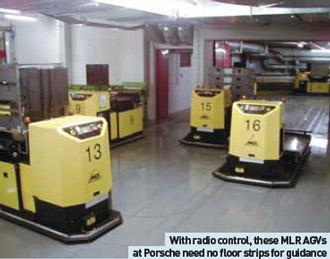 Fourteen Phoenix KGLT-1.0 M vehicles transport normal pallets and box pallets. These are fitted with two-strand chain conveyors with a retractable cross transfer unit to bridge gaps at the load transfer points. Two Phoenix KXLT-1.0 Mr are used to transport the special pallets from the trim shop to the picking zones. These vehicles also have two-strand chain conveyors, in this case without the transfer unit. All vehicles travel at a maximum speed of 1.66 m/s forwards and backwards.

The system is controlled by the LogOS-AGV control system, running on a PC that is connected via Ethernet with the host computer. In addition to controlling all AGV activities, the software manages order fulfilment and routing. Communication with the 16 AGVs is via broadband radio; communication with the conveyor belts and with building infrastructure such as fire doors is via exchange of signals.