Raising the roof at Jaguar

The new Jaguar XJ features among its generous list of standard equipment the first full-glass roof on a Jaguar. This toughened Webasto glass roof is a defining feature of the new model, adding an ‘architectural lightness’ to the car’s exterior. A special opening mechanism also gives the new model the lowest exterior roofline in its class. Positioning, inserting and bonding the panoramic glass roof to the aluminium body requires a complex automated conveying and handling system that was developed between the engineering team at Jaguar Cars and Excel Automation, a materials handling and automation specialist. In order to deliver the project on a turnkey basis, Excel formed a partnership with two other established suppliers in the field, MacDonald Humphrey Automation and Expert Tooling.

Expert partners
The three partners – Excel specialising in conveying and transfer systems, Expert in robotics, precision tooling and gluing systems, and MacDonald Humphrey in automation and control – started out by working with the Jaguar team to develop a detailed simultaneous engineering (SE) project for the roof insertion system. Input from the partners helped Jaguar identify the best solution and also the best location in the existing facility for the equipment in order to avoid disruption to ongoing or future assembly line operations. The results of the SE project were then used by Jaguar Cars to obtain open market tenders prior to final supplier selection. Excel and its partners were successful in winning the contract to implement the proposed solution for an insertion system that would bring together and bond the glass roof and the all-new aluminium body. 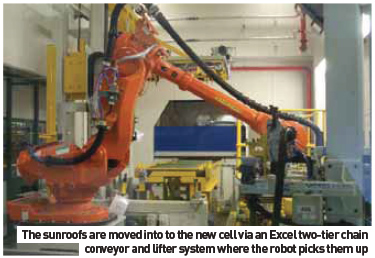 Jaguar XJ bodies are delivered from the Castle Bromwich body store by truck. At an assembly point, they are transferred into a static ‘false’ trailer. The bodies are then fed into the building using a series of roller beds and elevators before being loaded onto the existing assembly system that served both the previous and new XJ models.

A requirement of the project was that the new automated roof insertion cell should be introduced into the existing overhead conveyor system bringing bodies to the trim and final assembly line; this had to be achieved without changing the functionality and efficiency of the transportation systems and assembly processes.

To facilitate the fitting of the glass roof, the structure and operation of one of the elevators in the body delivery conveyor had to be modified to remove and lower those cars to ground floor level. There, a robot-controlled panoramic roof insertion cell, designed by Expert Tooling, has been installed to bring roof and car together. These changes involved decommissioning and removing the old elevator and introducing the new one through the roof of the building. This was done using a 100-tonne telescopic crane. Excel designed and manufactured the new elevator, which required an increased lifting stroke of approximately seven metres to service the ground, first and second floors. Excel also project-managed the operation, including rewiring and re-commissioning, during a twoweek shutdown period; the new elevator was operating successfully within the existing system when the assembly line was restarted.

Commenting for Excel, Managing Director Gary Sweeney says: “The success of this modification, and of the project as a whole, was helped by the fact that MacDonald Humphrey was the controls supplier for the existing overhead body delivery system installed in 2005.

Too smooth for a vision system
Sunroofs are introduced to the new cell on specially designed platens via an Excel-supplied, two-tier chain conveyor and 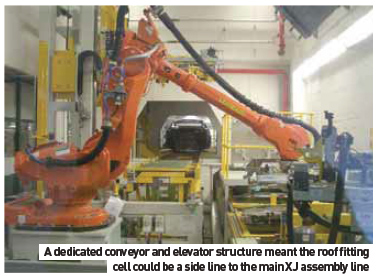 lifter system. The elements are then positioned and inserted using mechanical centralising methods and robots rather than by camera-driven vision systems. Expert’s Terry Davidson explains: “A vision system would measure the roof aperture, adjust the programming of the robot, then try to fit the roof based on those measurements. However, the absence of sharp body features on the flowing lines of the XJ make it difficult for a vision system to ensure accuracy and repeatability in the operation.”

The system centralises the roof panel using an ABB robot and a special gripper featuring a ‘floating’ joint. With this method, the glass roof is always suspended above the car in a known position on the gripper, with the car’s roof aperture in a known position below. Instead of moving the whole robot to the car, the gripper joint is programmed to unlock and move into position around the body. Before insertion, the roof is heated to the specific temperature required to cure the polyurethane adhesive used in the bonding process. The robot then positions the roof underneath an SCA Schucker applicator to receive the required adhesive, following which the completed roof unit, held within a specially designed fixture, is lowered to meet the roof aperture of the XJ body. At this point, the special joint on the gripper disengages, allowing it to ‘float’, while the floating gripper ensures that the roof is in the correct position to accurately locate the sunroof aperture. Weight, in the form of the platen, is then applied for four seconds to complete the gluing process and ensure that the car and roof are perfectly bonded. Roof assembly fitted, the body is fed back up into the body delivery system via the Excel conveyor to continue its journey through assembly.

The robot and the adhesive system that completes the installation process are both interfaced to a PLC via Interbus protocols, creating an integrated and reliable system that has proved extremely accurate.