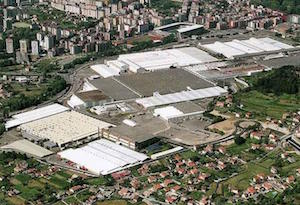 Spain – Paintshop supplier Sames Kremlin has announced that in March it won the contract to update lines one and two at PSA’s Vigo factory. Over the coming months, the company will install a total of 51 robots at PSA facilities in Trnava (Slovakia), Poissy and Rennes (France), plus the Spanish plant.

The modernisation of the Vigo paintshop will take place at the start of August during the summer shutdown of the factory, avoiding disruption to production. Sames Kremlin will install 14 robots for bonnet, boot, van interior and door interior painting, while 20 robots will be used as openers. All processes except the van interiors will be integrated with a continuous conveyor.

Sames Kremlin has also recently carried out work for Renault Alpine at Dieppe and Renault at Batilly in France. Furthermore, the company will install 67 robots in the new paintshop at Nissan Sunderland, UK, this summer.