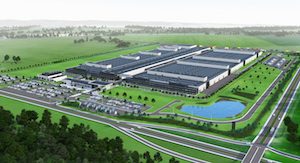 Poland - Two years after construction plans were announced, the plant in Jawor is nearing completion, and will become home to the production of four-cylinder diesel and petrol engines in 2019. These will be used in vehicles that have conventional powertrain structures as well as hybrid electric vehicles (HEVs).

The OEM has revealed that over 1,000 people will work at the site - 500 more than initially announced when ground was broken at the ceremony last year. This, it says, is due to rising demand for its four-cylinder engines.

"In our CO2-neutral plant in Jawor, we will build highly efficient engines for our hybrid vehicles and conventionally powered passenger cars," stated Markus Schäfer, member of the divisional board of Mercedes-Benz Cars, production and supply chain. "The construction of this plant is an investment in the future and an important milestone on our way to the mobility of the future. This is a strong sign of our commitment to the location and to German-Polish friendship."

Different engine variants will be made alongside the corresponding crankcases on "highly flexible lines," Mercedes says. This will allow the plant to adopt and react quickly to changes in market demand.