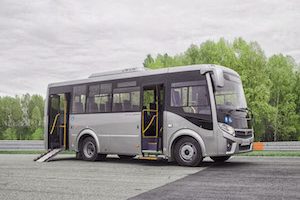 Russia - The company has started making three new variants of its Vector NEXT bus - one for ease of use by disabled people, one for intercity travelling and one with a compressed natural gas (CNG) powertrain for urban transport. It hopes to increase sales of the buses by 60% to around 1,700 units in 2018.

Production of the Vector family started at the Pavlovsky Avtobusny Zavod (PAZ) bus plant in Pavlovo - a small town an hour west of Nizhny Novgorod - back in June 2016. PAZ is a subsidiary of Russian buses, which is a division of GAZ. It is the largest producer and best seller of buses in the country, recording a market share of 49% with 2,610 units sold between January and May 2018.

Although PAZ holds the greatest market share, GAZ's plans to increase sales of the Vector variants could be in response to declining sales of domestically produced buses in Russia. Figures from Russian Automotive Market Research show that sales of foreign brands were up by 59.8% between January and May 2018, whereas sales of Russian brands increased by 10.9%. This led to a decline in the share of Russian brands from 87% to 83%.

Like many bus companies around the world, GAZ has been increasing its efforts in electrification. The company recently presented a new pure electric bus to the Mayor of Moscow. It is equipped with lithium-titanate batteries that can reportedly be fully charged in around 18 minutes.