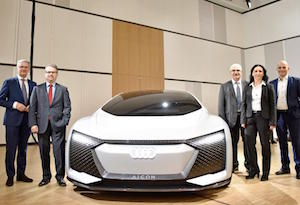 Germany – The model allocation was announced by CEO Rupert Stadler alongside confirmation of job security for all Audi AG employees until 2025. In total, the ‘Audi. Future’ agreement will see the OEM produce 20 electrified models by 2025, including more than ten pure electric vehicles (EVs).

“Building up manufacturing capacity for electric cars in Germany is at the heart of this pact for the future, which we are currently negotiating,” said Stadler. “It demonstrates our clear commitment to the future of the Ingolstadt and Neckarsulm plants.” He added: “The transition to electric mobility and the general volatility of car markets demand immense flexibility from the company and its workforce.”

Peter Mosch, chairman of the General Works Council, said: “We have long been fighting for a job guarantee up until the end of 2025. Our colleagues need that certainty, and that is something we can now finally give them.” He suggested that a deal would allay workers’ fears about the future in an age of digitalisation and new powertrain technologies.