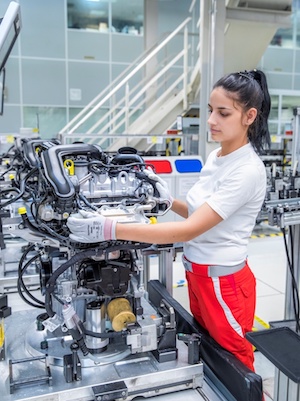 Hungary - Series production of the OEM's new three-cylinder 1-litre petrol engine has started at Audi Hungaria's plant in Győr. It will be fitted in various Volkswagen Group models, including the Audi A3, BW Golf, SEAT Leon and Ateca.

"Our engine production facility adapts flexibly to new trends in the automotive industry," commented Achim Heinfling, chairman of the board of management at Audi Hungaria. "While establishing alternative drive systems, we are also consistently developing our combustion engines. With the series production of the new three-cylinder engines we are adding another efficient and powerful engine type to our portfolio."

The 1-litre engine is the first in a new family that will be made at the plant, with 1.2-litre, 1.4-litre and 1.5-litre variants being added at a later date. Employees working at the facility can now make four different engine variants on the same line, which according to Audi, is "the most flexible engine assembly line in the Audi Group."

"Our 6,000 employees in Engine Production produce around two million engines per year, making us one of the world’s largest engine manufacturers," added Herbert Steiner, member of the board of management for engine production at Audi Hungaria. "We currently produce three, four, five, six, eight and ten-cylinder engines and supply 32 production locations in the Volkswagen Group."

Audi has also promised to expand its powertrain production in the near future to adhere to the growing trend of electrification. It's first fully electric SUV, the E-Tron, will be made at its Brussels plant.