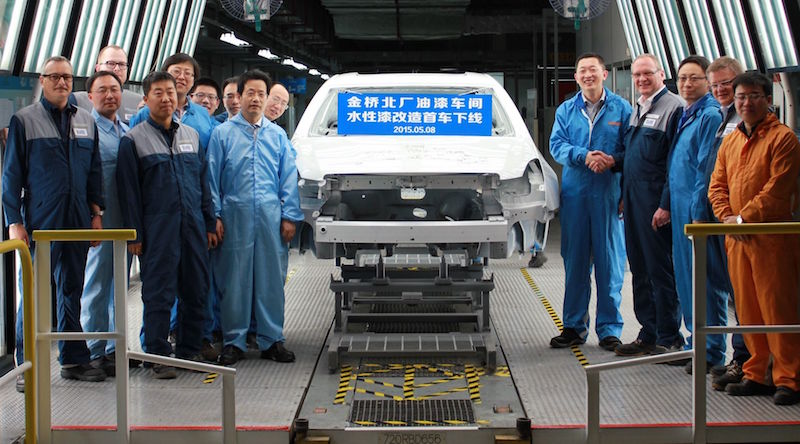 In mid-May 2015, Dürr completed a €33m ($36m) conversion project at SAIC General Motors (SAIC-GM), the dimensions of which were exceptional even for the German plant construction company. The project objective was to fully refurbish a paintshop in under six weeks, with 1,200 workers from various trades, 100 supervisors, a 500 sq.m site office and 4,000 sq.m of onsite logistics space.

“Modernising entire paintshops is part of our daily business. However, the target of achieving this in record time was a real challenge. We knew that everything had to run like clockwork,” says Ronald Fein, project director at Dürr, summing up the unusual nature of this task. SAIC-GM’s aim for the modernisation was to achieve ecological improvements and greater automation: "We installed new, highly flexible robots which will make production processes considerably more efficient," explains Jason Wu, project manager for application technology at Dürr China.

For almost 20 years, up to 40 bodies per hour have passed through SAIC-GM’s paintshop in Shanghai, each receiving an ED coating to protect it against corrosion, undergoing various drying cycles and finally emerging resplendent in one of 15 colours. Now, however, in addition to the wear and tear that is typical of a plant of this age, three other factors in particular had prompted the managers at SAIC-GM to initiate a multimillion-euro project.

Firstly, the plant had to be brought in line with the latest environmental standards. A basic prerequisite was the changeover from solvent-based to water-based paints.

SAIC-GM also incorporates the bodies of a new model into its coating process. Furthermore, the paintshop had been operating at maximum capacity for a long time, which made the expansion of this capacity unavoidable in the medium term. This situation also left little room for manoeuvre in terms of the construction work, as SAIC-GM’s limited capacity meant that it was unable to prefabricate large quantities to cover the prolonged period of reconstruction.

Dürr uses international teamWhen SAIC-GM’s demanding request arrived at Dürr in China in March 2014, it soon became clear that this contract would require special measures. Dürr established a core project team of 12 people, comprising experts from Germany, China and Korea. It was not only the technical and practical expertise and knowledge of the Chinese market that played a key role; a very important factor for Fein was the selection of individuals with leadership and team skills. This was essential not only for selecting the best possible local service providers, but also served the interests of successful intercultural collaboration.

As the “control centre”, a 500 sq.m. site office based on an open-space concept was constructed especially for this project. “It’s quite understandable that the customer critically assessed this need for an enormous administrative space in the planning phase. However, our experience didn’t let us down. After all, at peak times during day and night shifts, up to 1,200 workers were working on the construction site, and they all needed coordinating.

“For this purpose, Dürr had a total of 100 supervisors onsite in Shanghai,” says Fein, an expert at Dürr in implementing projects in the Chinese market. He knows the capability of Dürr’s own staff and of the various suppliers very well. Before the conversion itself started in Shanghai, however, the project team faced a monumental logistical challenge. Dürr calculated that it would need an area of 4,000 sq.m simply for storing materials and creating several small workshop islands onsite, and another 8,000 sq.m outside storage near the plant. By late 2014, it was already possible to deliver and store most of the new plant parts. Dürr also prefabricated many of the required parts at its plants in China and Korea, thus ensuring a high degree of planning reliability in terms of time and quality.

Preparations for smooth operationBefore the project could enter its crucial phase from the end of March 2015, the existing paintshop had to be prepared for the major conversion work. Not only did waste materials need removing, just-in-time delivery of new parts to the paintshop had to continue. SAIC-GM established a logistics team to channel the incoming and outgoing trucks to avoid congestion. The waste material going out and new material coming in necessitated seven assembly platforms at different levels and ten large building openings, some of which required the removal of switch cabinets and conveyor systems. With mobile cranes, around 1,100 tons of waste material were extracted from the paintshop and immediately taken away, while the new materials were installed in the facility. 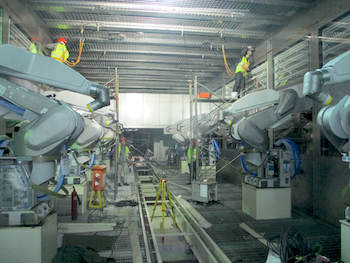 ED tank special treatmentAs soon as the 25m x 3.7m x 3.6m large tank for electro dip painting (ED) was drained, it was clear that the partial repairs originally planned would not be sufficient. More time and manpower was required to remove and replace the tank’s entire surface. Up to 120 workers were already optimising the pipework, modernising the anolyte circuit, and upgrading 53 modern dialysis cells, which ensure that the ED paint adheres more efficiently to the body.

Next door, the conversion team was replacing the ED oven and integrating new heating units. “It wasn’t an easy job. We manoeuvred the existing oven, suspended from a rail construction on the ceiling, out of the hall and then moved the new 129m x 4.4m x 3.3m large oven, delivered in 25 separate modules into position,” explains Hagen Rebmann, senior project manager at Dürr.

Creating spaceThe raised painting booth area did not remain unaffected by the conversion either. In addition to replacing two high-speed elevators, which safely transport bodies at a speed of 150 metres per minute and back down again, a great deal has also changed in the painting booths themselves. New spray booths for primer, basecoat, and clearcoat as well as a modern fire protection system and a solvent detection system were installed. The team also disposed of the existing painting machines in the primer, basecoat, and clearcoat booths and installed 24 painting robots.

“We were able to free up a lot of space here because these modern robots are much more compact and flexible than the portal painting machines used previously,” says Jason Wu, project manager of Dürr China.

Breath of fresh air for optimal painting resultsTo extract exhaust air optimally and ensure that the painting booths are supplied with sufficient fresh air, the conversion team replaced nine air supply units with a total capacity of 1,000,000 cu.m/h and changed six exhaust air fans. The hot and cold water system for the supply air units was also affected directly by the changes. “We fitted new control groups, extended the water system, and installed new pipelines,” explains Rebmann. “The replacement of a cold water pipe so that it has a future diameter of 800mm instead of the previous 600mm was carried out almost unnoticed.”

Like clockworkA shutdown of seven weeks was originally planned. “The visible changes were enormous in the first few weeks,” sums up Fein. “We laid 200 metres of high-current bus bars, 120km of cable, and 14km of paint circulation lines, modified 100 control cabinets, and installed 500 new skids. An important factor was that SAIC-GM supported the commissioning team with their maintenance and operation. Being familiar with the plant and its problem areas for years helped them solve problems faster.”

Individual areas of the paintshop underwent separate tests at an early stage. In some places, the new skids already had to be fitted during the construction phase to ensure that preliminary tests could be conducted, for example, in the painting area and in the ED tank. “Naturally, it remained exciting throughout, and on May 8, it finally became clear that all the pieces of the puzzle fitted together perfectly when the first body went through,” says Fein.