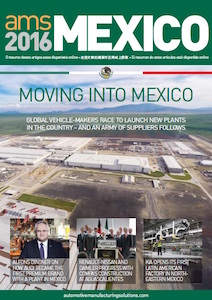 Mexico, unlike many parts of the world, is currently experiencing a boom in automotive manufacturing. This year, Kia and Audi both unveiled their first factories in the region and a further four plants are due to be launched by 2019 (Renault-Nissan-Daimler, Ford, BMW and Toyota). Long-time veterans of vehicle production in Mexico, such as Volkswagen, are also expanding. This growth is likely to raise total output in Mexico by an astonishing 43% to 5m vehicles per annum and therefore move the country up to sixth place worldwide. Industry insiders suspect that this may be merely a temporary stage on route to an even stronger position.

However, such a rapid expansion may bring challenges, including a shortage of skilled labour and increased pressure on the supply base. It will be vital for industry and government to work together to support the immense growth in Mexico and ensure its continuation.

All the latest developments, success stories and challenges are covered in this special edition of AMS, which is free to view here. The in-depth features about the activities of major OEM and suppliers in the country are as follows:

Mexico's boom time – an overview of automotive production in the country, including recent OEM investmentsInterview: Alfons Dintner – Audi's CEO in Mexico explains how it became the first premium OEM with a factory thereNissan heads in a new direction – AMS looks at the new COMPAS project in the context of Nissan's broader footprintKia's brave new world – we visit the OEM's newly inaugurated, state-of-the art plant in the north-east of the countryRevitalising a veteran – an update on new additions to Volkswagen's vast manufacturing complex at Puebla for the Golf 7 and TiguanFinding affordability – a look at Ford's investments in Mexico, including its newly announced small-car factoryMotoring in Mexico – we provide an update on changes to production at GM's four existing plants in MexicoSwitching to SUVs – FCA's Toluca factory may reduce its current line-up in favour of SUVs; AMS investigatesCorolla rolls into town – we examine Toyota's changing footprint, including its first car factory in MexicoMazda: Growing in Guanajuato – a summary of the OEM's first plant in North AmericaFit for purpose – a look into Honda's reshuffle, which will see its Mexican sites focusing on the HR-VFeeding the machine – an in-depth overview of recent supplier investments in the countryInterview: Fidel Otake, GKN – the company's operations director discusses its new, high-tech propshaft facility in GuanajuatoIncreased Magna-tude – AMS looks at the supplier's new exteriors factory in Querétaro.