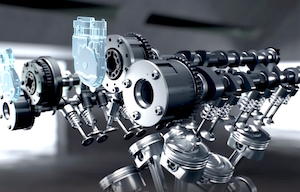 Japan – The 3.0-litre, twin-turbo engine is billed as “the lightest, most powerful, cleanest and most fuel-efficient” V6 that Infiniti has yet offered. It will initially power the 2016 Infiniti Q50 sports saloon, and later the new Q60 sports coupe.

The V6 engine, part of the VR series, will be available in two performance levels: 304PS and 405PS. Only the higher output will be offered in Europe.

“Infiniti is in the middle of a major product offensive, significantly expanding and refreshing our product portfolio,” said François Goupil de Bouillé, vice-president of Infiniti Europe, Middle East and Africa. “The experienced team at the Iwaki Plant will deliver the engines with the highest levels of quality for our customers across our EMEA [Europe, Middle East and Africa] region and around the world.”

Nissan Iwaki, which opened in 1994, covers 200,000 sq.m and employs around 600 individuals. The plant has an integrated production system and an automation level of more than 60%.