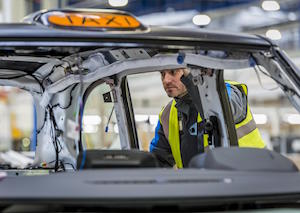 UK – The £300m ($377.1m) factory at Antsy, Coventry, will be able to produce up to 20,000 range-extended electric vehicles (EVs) per year for global markets. The investment by parent company Geely, the Chinese carmaker, has created over 1,000 jobs, including 200 engineers and 30 apprentices.

“The opening of our new plant sets a number of records,” said Carl-Peter Forster, chairman of the London Taxi Company (LTC). “It’s the first brand-new automotive manufacturing facility in Britain for over a decade; the first dedicated electric-vehicle factory in the UK; and the first major Chinese investment in UK automotive.” CEO Chris Gubbey added that the launch marks the “rebirth” of LTC, which was bought by Geely in 2013.

The construction of the plant, which took two years, was supported by the UK Government’s Regional Growth Fund. The facility has 850 sq.m of photovoltaic solar panels plus 20 charging points for EVs. It has also achieved an A rating for energy performance and ‘excellent’ status in the Building Research Establishment Environmental Assessment.

According to LTC, the new facility will not only produce green taxis but also become a “globally connected R&D centre” for EV powertrains and lightweight aluminium body structures. The vehicles made there will use proven Volvo Car electric powertrain technologies and components while retaining internationally recognised design features. LTC says it will produce derivatives of this electric platform in future.