Seven rounds of talks have taken place since NAFTA renegotiation began last year but the trio of nations are no closer to agreeing a deal. Nick Gibbs reports 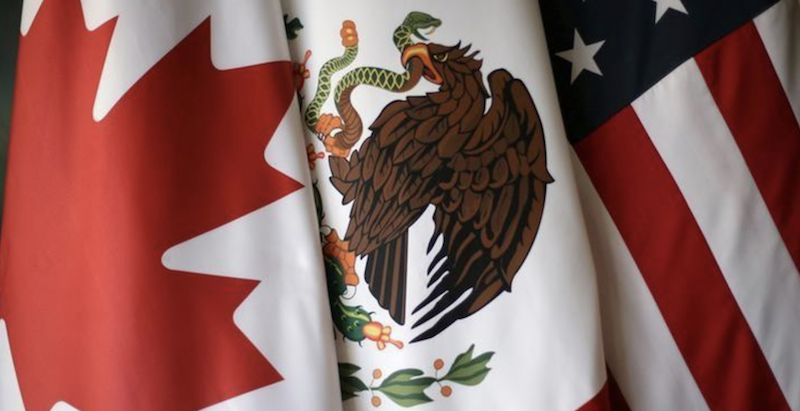 President Trump’s policies on trade relations continue to cause upheaval within the automotive industry. In the US, one of the biggest headaches is the government’s aggressive proposals to reshape the largely successful North America Free Trade Agreement, NAFTA.

What is NAFTA?NAFTA was first signed by President George H.W. Bush in 1992, ratified, signed again by President Bill Clinton in 1993 and came into force in 1994. Essentially, it established a free trade region between Mexico, Canada and the US by cutting tariffs and customs barriers with the purpose of making companies in those regions globally competitive. Of all the industries it benefited, automotive was one of the biggest. 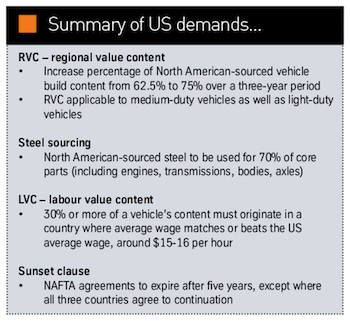 Who benefited?Mexico, and all those automakers taking advantage of the country’s lower wages have done very well. Prior to NAFTA, Mexico was relatively protectionist, penalising imports and favouring local production of vehicles and parts. NAFTA gradually did away with that. After all the barriers were finally phased out in 2004, more automakers joined Volkswagen and the US trio of Ford, GM and Chrysler (now FCA) in establishing plants there.

For the automakers it was the perfect place to build lower-tech commercials such as pickups (like RAM at Saltillo, Chevy Silverado at Silao) or lower-margin small cars (like Chevy Trax at San Luis Potosi, VW Jetta at Puebla).Wages in Mexico averaged $7.34/hour for auto assembly and $3.41/hour for automotive parts in 2017, data from the Michigan, US, based Center for Automotive Research (CAR) shows. By contrast, wages were over $20 an hour in the US and Canada.

US production has stayed largely static, from 11.4 million light vehicles in 1994 to 11.3 million last year, and certainly job numbers have fallen. But the automakers’ ability to expand capacity in Mexico for vehicles better suited to a low-wage environment has allowed them to deliver impressive profits, while sustaining legacy plants in the US and suppressing sticker-price rises well below overall consumer price index increases.It’s not all one way either. Thanks to the interlinked supply chain that has grown up because of NAFTA, Mexican cars contain between 20-30% of content sourced in the US or Canada, CAR estimates.

As NAFTA gradually did away the trade barriers, the likes of Ford, GM
and several others established plants in Mexico as well as the US

Last year 11% of the country’s 17.3 million sales of light vehicles came from Mexico, amounting to 2.3 million, a new record. However, the same percentage were imported from Canada and the same again from Japan, so Mexico isn’t dominating, yet. In total, 44% of vehicles sold in the US were made outside the country.

It’s NAFTA neighbours are the together the biggest consumer of US-made vehicles, taking more than 71% of US vehicle exports in 2017. Canada took by far the largest share at 912,277 in 2017, representing nearly half. Mexico, by contrast, was the US’s fourth largest export market with 159,767 vehicles, putting it behind Germany. There’s no doubt the US has a trade imbalance with Mexico given the numbers it sends north.

What rules does the US want to change?President Trump’s somewhat simplistic view of world trade argues that removing barriers has reduced US job numbers, so if you raise those barriers again, job numbers will go up.

The main rule now is that to qualify for free trade within NAFTA, vehicles built there must contain 62.5% content from the region. This is already high, but US government is proposing to increase this so-called regional value content (RVC) to 75% over a three-year period. The US also wants this to apply to medium-duty vehicles as well as light-duty vehicles.

On top of that, the US wants to impose a rule that says North American sourced steel must be used for 70% of core parts, for example engines, transmissions, bodies and axles. There’s currently no requirement to source that locally.

The other big sticking point is called labour value content (LVC). This US proposal says that 30% or more of a vehicle’s content must originate in a country where the average wage matches or beats that of the US average wage at around $15-16 per hour. CAR calls this a “carve out” to promote manufacturing in the US and Canada to the detriment to low-wage Mexico.Finally there’s another US proposal sticking in the craw of Mexican and Canadian negotiators: NAFTA would end every five years unless all three countries agree to keep it, the so-called ‘sunset clause’.

Where are negotiations at right now?Negotiations started in August 2017 and after seven rounds the three countries are no closer to agreeing a deal, although Mexico’s has said it would be willing to raise the RVC to from 62.5% to 70%, close to the US’s 75% proposal. At the beginning of July, President Trump told Fox News that he would now wait until after the mid-term elections taking place early November before signing a deal. “I could sign tomorrow but I’m not happy with it because I want to make it more fair,” he said.

Mexico elected a new president early July, which has complicated the issue even further - the left-leaning Andres Manuel Lopez Obrador (or Amlo, as he’s known). What Will Amlo Do? is now the big question. A past critic of NAFTA, Amlo softened his stance on the campaign trail. In an interview with news agency Reuters during July, Jesus Seade, Lopez Obrador’s chief negotiator for the NAFTA, said an agreement could be reached by December.

What would be the outcome if the US proposals go through?The industry in general is not happy. “The Trump administration’s goal with the proposed changes is to bring back manufacturing to the US and job creation. But ultimately, if the NAFTA rules are too demanding or content targets are too steep, it could have an adverse effect,” Bill Rinna, director of vehicle forecasts for the Americas at LMC Automotive, told AMS.

He argues the region is currently globally competitive, thanks to interconnected supply chains, logistics and vehicle assembly maps created over the past 24 years of NAFTA stability. “It will definitely unhinge the market,” Rinna said.

Similarly, CAR warns of unintended consequences. For example, automakers could choose to locate some elements of their business further away, rather in the US. “Every global automotive producing region relies on low-cost content to be competitive,” a CAR briefing on NAFTA from April this year stated. “If US automakers do not rely on Mexico, they will find other sources for low-cost automotive parts.”

The briefing highlighted Ford’s decision to shift production of the new Focus for the US to China rather than locate in Mexico, which would inevitably mean the car used fewer US sourced components.

The potential for increased prices is almost inevitable too, says CAR. With localised parts more expensive (made from pricier, local-sourced metals), production becomes more expensive and cars are ultimately more costly for the consumer. Under the proposal to increase local content to 75%, between 25 and 87% of cars currently on sale in the US would not meet the criteria, CAR estimates.

One option would be to ignore the NAFTA rules altogether and simply import vehicles under the US’s most favoured nation (MFN) tariffs, running at 2.5%. A move that would push up prices. Many parts for example are already imported into the US at MFN rates – 16% all parts from Canada and 23% from Mexico are traded this way.

Turn this around, however, and the MFN rates for parts going to Mexico would be taxed at 23.1% and 15.7% into Canada. And while cars coming in would switch to a 2.5% tariff, “vehicles for transporting goods” would be raised to 23.3%, not far off the 25% tariff the US charges Europe for importing vans and pickups into the country (cars are 2.5%, against 10% for US cars imported to Europe).

CAR is pretty damning about the outcome. “The combined effect will likely result in higher prices for US exports, lower US export volumes, lower overall vehicle production, and a reduction in US auto sector employment.” 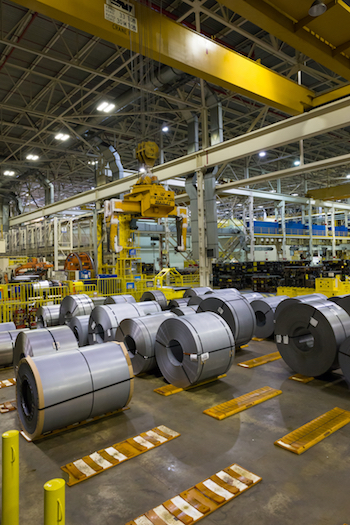 The US wants to introduce a rule to ensure North American sourced steel is used for 70% of core parts, such as engines, bodies and axles

Is Trump using the threat of auto tariffs as a bargaining chip?President Trump has repeatedly said he wants to tax imported cars more heavily. In July he made it more explicit that the threat of tariffs was his leverage in NAFTA talks. After telling Fox he wanted to wait until after the midterms before finalising NAFTA, he had this to say: “I have a feeling it’s going to be fine. And reason is because if they’re not fine I’m going to tax the cars coming into America, and that’s the big one. You know cars are the big one. We can talk steel, we can talk everything, but the big thing is the cars.”The US wants to introduce a rule to ensure North American sourced steel is used for 70% of core parts, such as engines, bodies and axles