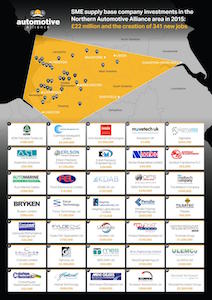 UK – The investments in the north of the UK, equivalent to $40m, were made by small- and medium-sized enterprises, including niche vehicle manufacturers and suppliers. In addition, at least 341 jobs were created last year, according to the Northern Automotive Alliance (NAA), which supports the growth of such companies in order to strengthen the upstream supply chain in the UK.

“Automotive supply base and niche vehicle manufacturing companies across the NAA area within the Northern Powerhouse are demonstrating impressive growth and making significant investments,” said Carol Holden, CEO of the NAA. “A major opportunity has been identified to grow the UK automotive supply chain, and these latest figures show that the companies working with the Northern Automotive Alliance are growing into larger suppliers – as well as making a significant contribution to the UK economy.”

The NAA released a list detailing some of the investments:

The figures cited by the NAA do not include investments by major vehicle-makers, such as Bentley Motors, Jaguar Land Rover, Leyland Trucks and Vauxhall.