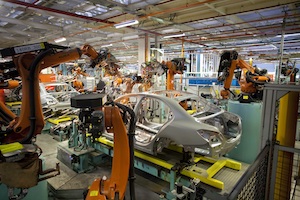 South Africa - Mercedes-Benz Cars has announced plans to produce the next generation of its C-Class in East London - a city on the southeast coast of South Africa in the Buffalo City Metropolitan Municipality of the Eastern Cape province. To do so, it will spend €600m (US$528.84m) to construct a new paint shop and body shop, as well as upgrading the assembly shop and logistics warehouses.

“With the investment of 600 Million Euro we are significantly expanding our plant in East London and equipping it for the future,” stated Markus Schäfer, member of the divisional board of Mercedes-Benz Cars, production and supply chain. “The decision to have the new generation of the C-Class built in East London re-affirms the plant and Mercedes-Benz South Africa. The investment is also a sign of our commitment to South Africa and efforts to revive economic growth as well as the socio-economic development of the East London region.”

The new body shop will be designed for higher capacities, says the OEM, featuring “ready robots laying the foundation for Industry 4.0 readiness.” 700 tons of steel will be used to create three additional assembly lines, while the paint shop will be more energy efficient and environmentally friendly. There will also be an on-site battery storage container and rain water harvesting systems on the roof.

The investment comes during the same year that Mercedes-Benz is marking its sixtieth anniversary of producing passenger vehicles at the East London plant. It is a key part of the C‑Class global production network, with the lead plant in Bremen, Germany, while other plants are in the US and China.