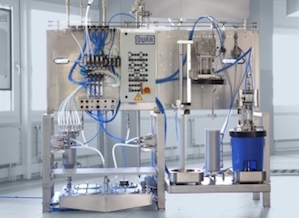 US – The Ecopaint RoDip equipment is being installed in a new paintshop for Mercedes-Benz Vans in North Charleston, South Carolina, and will enable vehicle bodies up to eight metres long to rotate through an immersion bath. According to Dürr, it will be the first time the process is used in production for vehicles of this size.

The electrically driven system will transport the bodies of next-generation Mercedes-Benz Sprinter vans through pretreatment and cathodic electro-coating. Each programmable transportation unit has a drive for rotation which is separate from the conveying drive and is designed to optimise the dip curves for better energy efficiency and coating quality. Dürr says that its technology enables smaller baths to be used, meaning less water and fewer chemicals plus reduced energy consumption and wastewater.

Dürr has been contracted to build the entire paintshop at the new Mercedes-Benz plant in North Charleston and will be supplying a number of robotic systems. Four rail-mounted EcoRS robots with new-generation EcoGun2 3D applicators will perform seam sealing, underbody protection and rocker panel protection within a single zone, following pretreatment. According to their manufacturer, the new applicators are lighter and more streamlined than their predecessors and therefore offer improved manoeuvrability within the body shell.

The interior and exterior paint processes will be fully automated and conducted in stop-and-go mode using EcoBell3 HX atomisers. In what Dürr says is another first for the US, non-rail-mounted swingarm robots will paint the interior of the cargo space.

The paint robots will be connected to the EcoSupply paint supply system with pigging technology, reducing paint loss during colour changes. Meanwhile, semi-automatic EcoDry X equipment, which works on the basis of cardboard filters, will allow the dry separation of overspray in the paint booths, avoiding the need for water or chemicals.

The $500m Mercedes-Benz Vans factory, first announced in 2015, is due to start production by the end of the decade. The construction of the new plant, including the paintshop, will reduce costs and delivery times; until now, Sprinters have been made at Düsseldorf and Ludwigsfelde in Germany, partially disassembled and then reassembled in North Charleston.