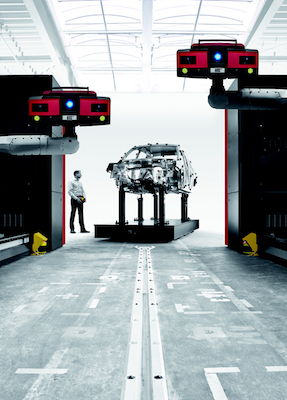 Austrian specialist EMCO-TEST Prufmashinen plans to feature its new Durascan G5 systems for the hardness testing of metal components. Introduced in January, the latest generation boasts a greatly increased range of applications and is equipped with a 10MP camera that allows components to be assessed with fewer lens changes, making it ideal for use in industrial settings, where it can help to boost productivity.

Spectro Analytical Instruments is another company promising to bring new products to the show. Its Spectrocheck metal analyser has been designed to provide high-performance metal analysis for small-to-medium foundry or machining operations. Capable of providing test results to the most rigorous standards, the machine is suitable for routine analysis of elemental content in a wide range of metals. Spectro’s display will also feature various machines for non-destructive testing, including X-ray apparatus, energy-dispersive spectrometers and general analytical devices.

Vogel too will bring new product lines to Stuttgart, Germany, such as its Digital Surface Roughness tester and its latest-generation digital caliper. In addition, Vogel will be keen to make visitors aware that it is now an official distributor for Bowers Group UK products and will therefore show new analogue and digital bore gauges.

Contactless metrology will feature in a defined area of the show in Hall One. This special exhibition aims to contribute to the level of awareness and acceptance of the most innovative measuring technologies and provide visitors with an aid to decision-making in what is becoming an increasingly complex and important market. The initiative is a joint endeavor by show organisers P.E. Schall and Fraunhofer-Allianz Vision.

Making metrology user-friendlyRenishaw will travel to Stuttgart with a range of new and updated products including its Equator flexible gauge, which is now offered with new INTUO gauging software, in combination with industry-standard probes. Equator offers the opportunity to replace numerous manual devices, reducing labour costs and improving consistency of results. A key feature of the system is its ease of use, with interfaces that require minimal training for personnel. Shopfloor operators select and run the programmes using their Renishaw Organiser front-end software, which enables the creation of sophisticated gauging routines using just a part with an engineering drawing; a prediction function allows INTUO to do much of the work.

Renishaw will also feature its new version of the REVO multi-sensor, five-axis measuring system for use with coordinate measuring machines (CMMs). It comes with enhanced power and a communications capability which allows it to benefit from the latest REVO sensors such as the RVP vision measurement probe. Visitors to Control 2016 will see the new, non-contact vision probe for the REVO multi-sensor systems along with updated MODUS metrology software which includes RVP configuration, image processing along with application-specific options, and automatic image storage for review and analysis.

GOM is another company that will show a range of updated products at Control 2016. The company’s newly expanded series of ATOS Scan Boxes will be of interest to automotive colleagues, as they are capable of dealing with large and heavy components including complete car bodies. They offer flexibility and ease of use, requiring no permanent installation or heavy ground works. Both Series 7 and 8 robot-driven ATOS 3D scanners perform simultaneous and coordinated, full-field 3D measurements capable of inspecting full car bodies or interiors.

GOM will also feature its new ARAMIS 3D camera for materials research and analysis of component behaviour. The stereo camera system provides precise 3D coordination based on triangulation by using point markers or stochastic patterns. It is supported by a sophisticated light-management system to provide high levels of accuracy and allow deployment regardless of ambient lighting conditions. In combination with an integrated test controller, the camera can be programmed and integrated within various testing environments as well as enabling the definition of interdependencies between testing parameters.

Nanofibre technical lighting specialist L.E.S.S. will attend Control 2016 to showcase its new lighting technologies that have an increasing part to play in machine-vision systems and related products. The Swiss company – a relatively recent start-up – is perhaps typical of the new, high-tech ventures in which the world of academia and industry overlap, bringing the fruits of top-level research to the commercial marketplace. The company’s technology for a new generation of distributed lighting systems is based on an active, nanostructured fibre the thickness of a human hair. It generates high-quality light that exhibits uniformity and brightness that surpass today’s standards. In addition, the thinness of the fibre offers great integration potential and design opportunity.

Nikon Metrology will return to Stuttgart this year with a new Laser Radar product designed for the automated inspection of large work volumes, and therefore of particular interest to the automotive sector. The Nikon MV331/351 will bring significant advantages over traditional vehicle-body inspection systems involving fixed cameras or horizontal arm CMMs. Faster and more accurate, it can deal with complex features on almost any surface including reflective panels and shiny painted surfaces. With a built-in robot-mounting interface, it provides a stable connection with most industrial robots and provides an ideal solution for both body-in-white and flush-and-gap inspections.

Boosting productivity and qualityUK-based test expert Mecmesin will be in Hall 1, demonstrating its new Helixa-i precision torque tester and a number of testing solutions to meet the differing needs of designers and manufacturers worldwide. The company can assist with compression, tensile, and torque tests on engineering components, materials and products to maintain quality throughout the design and manufacturing process. Mecmesin systems and instruments are used internationally by leading manufacturers and engineering companies at component, assembly and full-build levels.

IGH Automation is another exhibitor likely to be hoping for visitors from the automotive industry. As a production-system automation specialist, the company has been continuously developing into a supplier of technical solutions for manufacturing optimisation and factory automation since its foundation in 1985. With quality systems as a cornerstone of the business, IGH can offer a modular, database-supported client server system that can be parameterised to suit different production environments. This AQI system contains modules for infrastructure testing, reporting and various communication interfaces. Intranet modules for checklist editing, fault management, and error tracking supplement the portfolio. 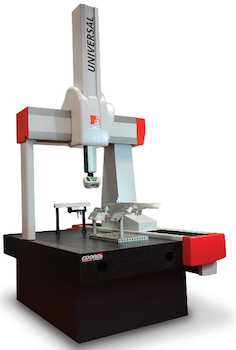 Perceptron, the Michigan-headquartered automated metrology specialist, already has a strong role within the automotive sector in providing metrology and 3D machine-vision solutions. For Control 2016, the company plans to introduce a raft of new products. Those on display will include a Helix Nx Laser Sensor, the PhotoTrack Robogauge, a Universal Expert CMM with Laser Scanner, and a Smart 3D HR with green laser. The new sensors embedded into the dimensional metrology solutions provide enhanced accuracy and productivity, says Perceptron. The company reports a 60% improvement in inspection cycle time, and a dramatic reduction in required robot index positions, when trialled on an automotive door.

An important supplementary element of Control 2016 will be a collaboration between the European Machine Vision Association (EMVA) and the show organisers to promote the EMVA forum, Control Vision Talks. The presentations are aimed at educating attendees on the benefits, applications and methods of machine vision and optical metrology solutions for factory automation. The objective is to go far beyond product presentations, with each of the four trade-show days featuring a dedicated technology topic. These are planned as follows: ‘Machine vision and optical metrology’; ‘Metrology throughout the whole spectrum: from infrared to hyperspectral’; ‘Automated optical inspection’; and ‘Optical metrology: offline – at line – inline’.