The Laser Radar provides an alternative to the shortcomings of CMMs
There is an increasing importance for automotive assembly plants to continuously monitor quality throughout the production process. This need is driven by OEMs pushing the limits of design by using complex shapes, new materials, and cutting-edge techniques. This is combined with the increasing demands for unique styling and overall look-and-feel of the vehicles. Locations of holes, slots, studs, and welding lines along with the flush and gap of doors, hoods, deck lids and other hangers need to be measured and monitored throughout the assembly process. These inspections ensure that vehicles are built within the ever more stringent tolerances set by automotive manufacturers.

Nikon Metrology, in close cooperation with key automotive OEM and integration partners, addresses these challenges by introducing an innovative approach to body-in-white (BIW) inspection based upon its non-contact Laser Radar system. Unlike a horizontal-arm coordinate measuring machine (CMM), its high-speed measurements fit within short production cycle times and it is robust enough to use directly on the factory floor.

Traditional BIW inspection is under pressure
In recent years, BIW measurements have been performed in two phases: on the production line with low-accuracy sensors to monitor process, and in a CMM room where a sample of parts is sent to be inspected offline by large, horizontal-arm CMMs for more accurate measurements and to correlate the data from the inline sensors.

Although CMMs can provide highly accurate absolute measurements, they tend to be slow and require an expensive, dedicated metrology room. Vehicles are removed from the production line and then taken to the metrology room and manually fixed and aligned to the CMM, which then begins a time-consuming measurement process. Taking into account the set-up and measurement time, at best two vehicles can be inspected per shift on a CMM, but often only one vehicle is measured. This is a very small sample considering that over 1,000 vehicles of various styles can be built each day on a single production line. This is certainly not a large enough sample to monitor the production process.

Features such as holes, slots, pins and studs can be quickly inspected using the Laser Radar

Inline systems typically measure every vehicle but can require over 100 fixed sensors to inspect the required features. Although these sensors are very quick to measure, they are demanding to install and maintain and do not provide measurements directly in the car’s coordinate system. In addition, most assembly lines now are ‘flexible’, meaning that they can produce more than one type of vehicle. Fixed sensors cannot be used across different vehicle styles; each one requires its own custom set of sensors, making them even more expensive and onerous to maintain.

Recently, inline inspection systems have been moving towards robotic solutions which are flexible but rely on the robot for positional accuracy, which limits their performance. These systems typically have four or more robots, with a sensor located on the end effecter of each robot that is re-positioned to measure each of the features that must be inspected. Hundreds of locations need to be programmed, making them time-consuming to set up and difficult to maintain and they still do not provide the required accuracy and correlation to a CMM.

Flexible inspection, absolute measurement
Innovative inspection stations are being installed today, both lineside and offline, by major automotive OEMs using Nikon Metrology’s Laser Radar. The Laser Radar has been used for many years in the aerospace and renewable energy sectors and is providing a unique alternative to the shortcomings of traditional automotive metrology systems like CMMs and inline sensor systems.

The Laser Radar performs automated, highly accurate, contactless measurements in the car's coordinate system by using a focused laser that is controlled by a precision azimuth and elevation system. The laser has a range of up to 30 metres and only requires a fraction of the reflected signal to make accurate measurements, enabling it to inspect almost any material, colour or surface texture. 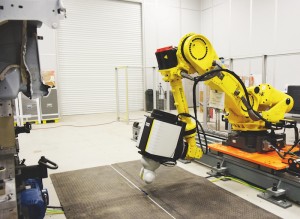 After repositioning the robot, the Laser Radar automatically realigns to the part by measuring alignment points on the vehicle or tooling. Unlike other inline robotic measurement systems, this guarantees that all measurements are collected in the vehicle coordinate system and ensures that feature accuracy is independent of the robot's ability to accurately locate the Laser Radar.

Laser Radar has a spherical field of view (±45º up/down and 360º around), meaning it has visibility for large sections of the vehicle at any time and dozens of features on the vehicle can be measured from a single location. Just like a CMM, measurements are pre-programmed directly from the vehicle’s CAD model using the inspection software.

After the initial programming, data collection and reporting is fully automated. Unique inspection scripts can also be written for each vehicle style and model being built on the production line, making the Laser Radar inspection station completely flexible for changes to inspection plans and even new vehicle styles. Changing the features to be inspected or adding in new vehicle styles is completely software-based and does not require any physical alterations or new hardware.

Lineside inspection stations are tied directly into the production line, so the vehicles are automatically shuttled in and out of the measurement cell and do not require any manual intervention during runtime. This means that more vehicles can be inspected without compromising accuracy, putting the automotive manufacturers back in control of their process.