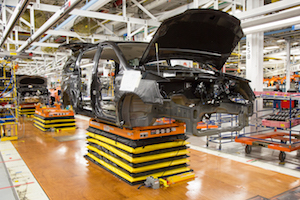 US – Production of the sixth-generation Chrysler vehicle began after the completion of major construction projects at the end of 2014 and the beginning of 2015, plus subsequent upgrade work. Since September 2014, the number of personnel has also increased by 1,200 to 6,000 on three shifts.

According to Fiat Chrysler Automobiles (FCA), $744m of the $1 billion spent on the development of the Chrysler Pacifica was allocated to Windsor Assembly, Canada, a plant which has been making vehicles for 88 years. The funds were used to upgrade equipment and processes to make the new vehicle and the existing minivan on the same line, as well as to add facilities for quality control. Production on the same line required the reconfiguration of the build processes through the plant to accommodate the two different architectures (with no shared parts), plus a hybrid model.

After the construction projects, completed during the two-week Christmas break in 2014 and 14 down weeks early in 2015, work continued to upgrade the existing building to accommodate new process loading and to create space for advanced technologies, enhanced conveyance and robotic assist equipment. When production resumed in May 2015, says FCA, the two key objectives were to return to full production of 1,490 units per day of the current minivan, within seven weeks, and to pilot the new minivan within a fortnight – while maintaining quality for the existing vehicle.

“What we were asking the Windsor team to do had never been done before,” said Brian Harlow, vice-president – Manufacturing, FCA North America. According to FCA, one crucial aspect of the preparations was the implementation of the workplace integration (WPI) process two years before production. A 100-strong team temporarily based at the Pilot Plant at the Chrysler Technology Center in Auburn Hills, Michigan, spent six months identifying best practices, validating preliminary workstation assignments, creating workstation layouts and evaluating ‘golden zone’ delivery points. The company says that “front loading” this process led to superior planning and minimised changes to the launch which might have impacted on cost, timing and efficiency. Work to further refine the assembly process continued at the WPI room set up at Windsor.

According to FCA, the upgrade at Windsor has involved a number of ‘firsts’: the first use in a North American bodyshop of a propulsion using linear synchronous motor energy (PULSE) transfer system; the first dual-arm laser radar measuring system worldwide, in the Component Center; and the first FCA North American application of an oil suparator in the paintshop.

In the bodyshop, where more than 80% of the equipment was overhauled, the improvements included:– 822 new robots– 19 new lines– five lines retooled– 1.3 miles of conveyors upgraded– the PULSE transfer system, capable of handling up to four architectures, which uses thrust rather than torque to move body sections through robotic workstations, increasing speed as well as reducing maintenance and downtime– resistance spot welding guns for the aluminium door– the 32,000 sq.ft Component Center with the latest equipment to identify sources of build variation and resolve any fit and finish issues– the laser radar, non-contact dimensional measurement system, which reduces measurement time per vehicle from 2.5 or three hours to one, enabling 15 rather than six vehicles to be processed per day.

In the paintshop, several new processes and systems were implemented:– a new, robotic sealer system which applies 83 metres of sealant to the underbody, engine compartment, interior and roof ditch– a new, high-speed friction drive transfer system to push more vehicles through the sealer cell and increase efficiency– a new sealer gel oven to harden the sealer and prevent it from dripping into the primer in the next step of the painting process– nearly all of the 2,300 carriers redesigned to handle both vehicle architectures– the oil suparator in pretreatment to remove oil applied to protect the sheet metal during shipping, prior to e-coating– 135 robots reprogrammed to distinguish between the two architectures.

In assembly, the following changes were made:– all workstations modified to handle both architectures, as was the material flow from the loading dock to the line– a new skillet system running through 74 stations, 46 of which are used for production, allowing height adjustment of the vehicle on the conveyor depending on which interior trim component is being installed, thus improving ergonomics and quality; the skillet system also transports kits on dollies, minimising lineside inventory and parts picking errors as well as facilitating 'golden zone' delivery– a new, 200ft overhead conveyor system to return the body carriers to the beginning of the line– automated windscreen installation– robotised storage tub placement– several hundred direct current tools upgraded– the suspension decking area modified to handle three models– several stations and ergonomic arms added for hybrid production.