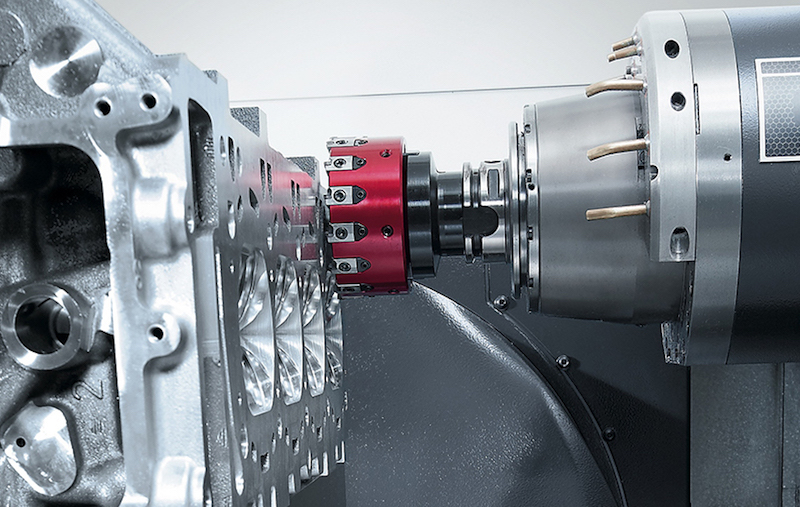 Machine tools are in a constant state of evolution as controls get smarter and spindle speeds and traverse rates get faster. In the automotive supply chain, this demands regular investment in the latest technologies, and not just at OEM plants.

“The 20-pallet system allows fixtures to remain set, so that feeding the three i-600 five-axis machining centres is both efficient and repeatable,” says Edward Grainger, director at G&W. “This solution offers good flexibility to cater for changing demands while minimising labour requirements.”

The prismatic machining demands of the automotive market are driving numerous development initiatives among the major machine tool manufacturers, and DMG Mori is no exception. A growth area at the company for years, the automotive division is now experiencing major structural change as a result of the growing diversity of vehicle models, shorter product life cycles, extensive modularisation and building block strategies, plus enormous cost pressure and ever greater production growth in emerging countries.

For the high-volume prismatic machining of engine and powertrain components, DMG Mori’s portfolio of horizontal machining centres extends from the company’s i-series, which are built according to Japanese manufacturing philosophy, through to machines in the NHX series with a fourth-axis table and pallet changer, and the DMC H series with linear drives.

From a large-batch turning perspective, DMG Mori says it has now optimised the vertical lathes in its CTV series to cope with the machining of homokinetic (constant velocity) joints and hardened gears. Where horizontal turning is concerned, the CTX, NLX and NZX series have also been further developed and adapted for different applications in the production of crankshafts, carrier bearings and electric motor rotors.

Investment in the latest turning machines remains high at all tiers of the supply chain. For instance, UK-based Auto Turned Products (ATP), has since 2012 been using an Index MS 32 six-spindle, computer numerical control (CNC) auto of 32mm bar capacity (with an opposed spindle) for producing a family of automotive components in batches of up to 250,000. Previously, the work would have been completed on a series of six single-spindle, cam-type machines. Such has been the success of the Index MS 32 that ATP installed a 40mm capacity Index MS 40 in July 2014, and a second, similar model late last year – all acquired from UK agent Geo Kingsbury. Eventually, the company plans to have nine Index CNC multi-spindle automatics installed in a specific area that is currently a cam auto shop.

All of the company's 40 remaining single-spindle, cam-type lathes were sold or scrapped last year and its existing stock of 22 multi-spindle cam autos will gradually be reduced. Production engineer Vic Pais describes the transition to CNC multi-spindle machining as extremely rewarding. “We would have struggled to cope with the significantly raised level of throughput without the high production capacity of the CNC multis,” he says. Financial manager Eddie Craddock adds that the first Index multi paid for itself within two years: “This was not only because higher output reduces unit production costs, but [was] also a result of the speed of programming and set-up, which lowers economical batch size to the low thousands.”

Producing more, fasterThe Index MS machines at ATP are dedicated to automotive parts. They produce batches of components down to 10,000-off for marques including Jaguar Land Rover, Rolls-Royce, Bentley and Aston Martin. "If the same bar is used, a setter can re-tool an Index multi for a new job in a couple of hours, which increases to about half a day if the bar size also needs to be changed,” says Pais. “The equivalent time for a cam multi could be two weeks." Comparing a CNC multi with a cam-type multi, Pais says that the former can produce more complex components three times faster than the latter. Factored into the calculation is 95% uptime of the CNC spindles compared with 60% for a cam multi, as well as the latter's long resetting time. Furthermore, one setter and one operator can attend three of each machine type, so for the same output there is a three-fold saving in labour. This will lower ATP's headcount as time progresses, and there is now a policy of not replacing employees who retire. 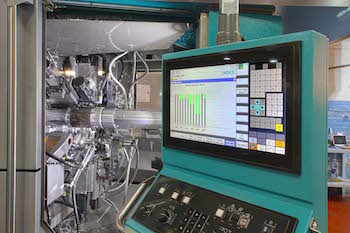 "The quality of finish on machined components is also far superior on an Index multi compared with other lathes we use,” says Pais. “Unlike CNC multis, cam-type equivalents suffer from having to use the same feeds and speeds at each spindle position, compromising cutting conditions at some stations – and they are not able to perform second operations, either. Index multis are the future for our company,” he concludes. “They inject big numbers of accurate components into our system in a short amount of time and are economical for shorter batches. The only problem we have is loading 3.2mm bar or tube into the six-channel bar magazines quickly enough, as the machine gets through stock at an incredible rate."

As can be seen, the reward for machine tool suppliers able to deliver a successful installation is clear: repeat orders. This was also discovered recently by TW Ward CNC Machinery (Ward CNC), the UK agent for Hyundai Wia, which received an order for two more of these Korean-built turning machines from Metrol Springs, adding to three existing models at the company’s facility in Northampton, UK.

Metrol Springs specialises in the manufacture of parts such as industrial gas struts, gas springs and gas spring systems. The company recently installed a Hyundai-Wia L300LMSA CNC lathe with C-axis, sub-spindle and driven tooling, and a L250SY CNC lathe with sub-spindle and Y-axis to produce steel housings and pistons (machined from carbonised, mild and tool steel) in varying batch sizes to suit demand from automotive clients in the Far East.

"We looked at alternative brands but have found our existing Hyundai-Wia models to be very durable, reliable and fit-for-purpose,” says joint managing director Andy Marks. “With bar feeds, conveyor unloading and tool monitoring they are often left to run unattended round the clock. However, as a total safeguard we also have all of our machines under the watch of 24-hour CCTV so that any problems can be quickly identified and resolved."

Many automotive parts benefit from machine tool solutions that have been developed with a specific component in mind, such as crankshafts, for example. Here, high-precision grinding processes are essential, and the latest technique from Emag – diagonal grinding – is said to offer notable cost reductions.

Single, all-inclusive grindingEmag engineers began their development work with a simple observation: the grinding of the cylinder diameter and the machining of the flat collar on the crankshaft have completely different requirements. While the central diameter receives its parallel surface in a multi-stage process, the somewhat coarser collar machining requires significantly fewer steps. To make things even trickier for the manufacturing engineer, the component is deformed during machining of the diameter, as it flexes radially. This process is therefore carried out at reduced power. The axial flexing of the flat collar during machining, however, is negligible. Instead, the unfavourable contact conditions here tend to cause overheating, so the grinding wheel wears more quickly.

“Given all of these differences, it looks as though you would ideally need to keep the grinding of the diameter and the collar separate to adapt the grinding speed accordingly,” says Roland Schmitz, head of grinding technology at Emag. “But of course, this would result in a slow process. Instead, our diagonal grinding does both in a single, all-inclusive procedure. We control the grinding speed and the movement of the axes independently of one another and with suitable precision for each sub-process.”

The new technique is said to complete preliminary grinding of pin bearings, centre bearings and split-sleeve bearings in approximately one-third less time than conventional double-plunge grinding, for example, which is often used for crankshaft machining.

“A crankshaft with seven bearings can therefore be fully ground in around 20 minutes, instead of 35 as before,” says Schmitz. “In addition, the process control guarantees a drop in tool costs because the diameter is usually machined at reduced power at the start of the process, lessening any impact on the grinding wheel. We estimate that this cuts tool consumption by a third per component.”

Emag has been supplying this technology in diagonal grinding machines since the beginning of the year, with the first models used for truck crankshaft production. However, there is nothing stopping its expansion into car crankshaft production, as well as camshafts and gear shafts.

Elsewhere, the UK agent for Europa Jainnher centreless grinding machines, RK International, reports that a Jainnher JHS-18 CNC eight-axes grinder with loading and unloading was recently delivered for the grinding of the four ‘legs’ on an automotive universal joint. Furthermore, a second recent application is facilitating the grinding of shock absorber parts with fully automated load/unload. Here, the process is achieving surface finish of Ra 0.16, roundness of 0.001mm and straightness of 0.003mm per 600mm.

The latest honing technologies are also in demand, as can be testified by Jasper Engines & Transmissions, which has recently ordered several Sunnen honing machines, including SV-20 and SH-4000 models. US-based Jasper now has a total of seven SV-20 engine block honing machines at its plants in Jasper and Crawford County, Indiana, and Willow Springs, Missouri. In addition, the company is using Sunnen's new SH-4000 horizontal honing machine for honing turbocharger housings, a growing segment of the business. Jasper is the largest mass remanufacturer of drivetrain components in the US, producing around 150,000 petrol and diesel engines, transmissions, differentials and rear-axle assemblies annually.

Sunnen has sold more than 80 SV-20 honing machines since the release of the product in 2013, after a development programme that included strong input from Jasper.

“Machines with a rocker-type stroker do a commendable job, but they cannot match the cylindricity produced by the SV-20,” says Bob Dolder, automotive sales and application manager for Sunnen. “Moreover, the programmability of the SV-20 gives Jasper more flexibility in assigning operators because the machine retains the ‘recipes’ for all the different engine blocks, minimising the need for operator input.”

Getting the measure of machining 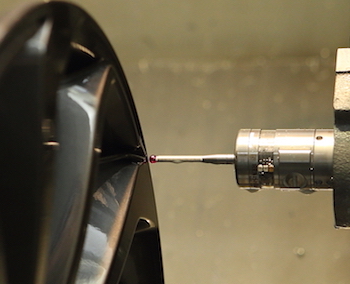 Machining parts quickly is one thing, but machining them both quickly and accurately is quite another. With this in mind, Taiwan-based SuperAlloy Industrial (SAI), a manufacturer of aluminium forged wheels and chassis parts, is using Renishaw probe systems that include the OLP40, RMP60 and OMP60 (and the NC4 laser tool setter) on a large number of its machine tools for in-cycle measurement. Tasked with producing around 200 different types of wheel, SAI currently has 600 computer numerical control (CNC) machine tools working on wheel rim production, including 150 Victor Taichung lathes and 450 YCM milling machines, all of which are engaged in three-shift production, five days a week.

In order to increase production precision and reduce scrap, SAI equipped the relevant lathes with OLP40 touch probes, which use optical signal transmission and are adapted for turning processes. Similarly, many of the company’s CNC milling machines have been equipped with RMP60 machine tool probes. These use wireless radio transmission to measure workpiece position and reference height, as well as provide in-line key dimension detection.

Among the major benefits to SAI, scrap has been reduced from 2-3% to zero. A total of 38 Tongtai five-axis machining centres at the company are equipped with OMP60 optical machine tool probes and NC4 non-contact laser tool setters. Unlike wheel rim production, chassis production tends to involve higher volumes and lower diversity. OMP60 optical machine tool touch probes use modulated optical transmission to provide 360-degree signal transmission, while the NC4 uses laser technology to perform measurement of cutting tools as small as 0.2 mm, and breakage detection on cutting tools as small as 0.1mm.