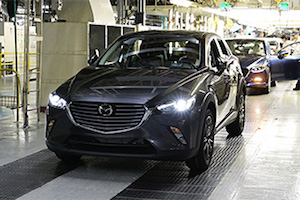 Japan – Plant No.1 in Yamaguchi began manufacturing the subcompact crossover yesterday, becoming the third plant to do so after Ujina Plant No.1 in Hiroshima and AutoAlliance (Thailand). Mazda said the move would strengthen its supply system for the growing SUV segment.

The OEM is transferring some production from Ujina, which began making the CX-3 in December 2014 and also produces the CX-5 and CX-9. AutoThailand started CX-3 production in October last year. According to Mazda, the launch at Hofu “went smoothly” because of its bundled product planning and common architecture concept, key components of its monotsukuri philosophy.

“We're aiming for a production system that gives us more flexibility in terms of plants and models, so we can get our cars to customers around the world as quickly as possible,” said Masatoshi Maruyama, managing executive officer in charge of global production.

Mazda intends that its flexible production system will be able to produce up to 50% crossovers, as it moves towards its global sales goal of 1.65m units. This target was set in the OEM’s Structural Reform Stage 2 medium-term business plan, covering fiscal year March 2017 to fiscal year March 2019.