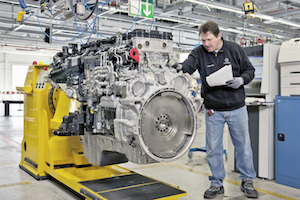 Germany - The company's plants in Mannheim, Germany and Detroit, Michigan have reached a joint milestone, producing 1m engines for heavy-duty vehicles. These have all been based on Daimler's heavy-duty truck engine platform that was introduced back in 2007.

"Global Powertrain stands not only for integrated drivetrains, but also for the integration of all global locations and relevant functions along the value chain," the OEM says. "The unit manufactures innovative and reliable drive system components according to globally uniformed quality standards. The components are used by all of Daimler’s commercial vehicle divisions and brands as well as by external customers."

The millionth engine to roll off the line at Mannheim was an in-line six-cylinder diesel. This is used in the Mercedes-Benz Actros, Freightliner Cascadia, Fuso Super Great and various buses from Mercedes-Benz and Setra. Detroit Diesel started making the engine in 2007, with production in Mannheim beginning three years later. It takes around six days for the engine to go through all stages of production, from foundry and machining to assembly.

In February 2018, Detroit Diesel - a subsidiary of Daimler Trucks North America (DTNA) - announced it was expanding its portfolio with the introduction of the Detroit DD8 engine. This coincided with growing sales of Daimler trucks and increased production during 2017.