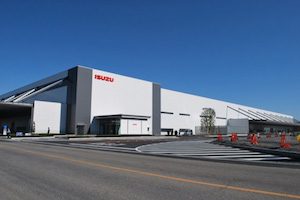 Japan - The company has built a facility that will produce a new series of diesel engines for light-duty trucks. It is located on the premises of its existing Tochigi plant north of Tokyo, which already makes engines for commercial vehicles, construction machinery and marine applications. Over 1,100 people are employed at the plant.

According to Isuzu, several 'smart' manufacturing techniques will be used at the new engine factory to maximise efficiency and help generate a people-friendly working environment. For example, the "cell production system" allows multiple processes to be grouped, helping to improve productivity. A system is also deployed to ensure that debris scattered from the machining line is collected.

The new engines made at the factory will conform to the 2016 exhaust emissions standards, which are comparable to Euro VI and US 2010 standards. They will be used in Isuzu's Elf truck and sold in Japan.

The Tochigi plant is the company's only plant both in and outside of Japan to include a forging facility, which is used for the production of camshafts. When possible, the company recycles the iron powders from the forging process to minimise waste.