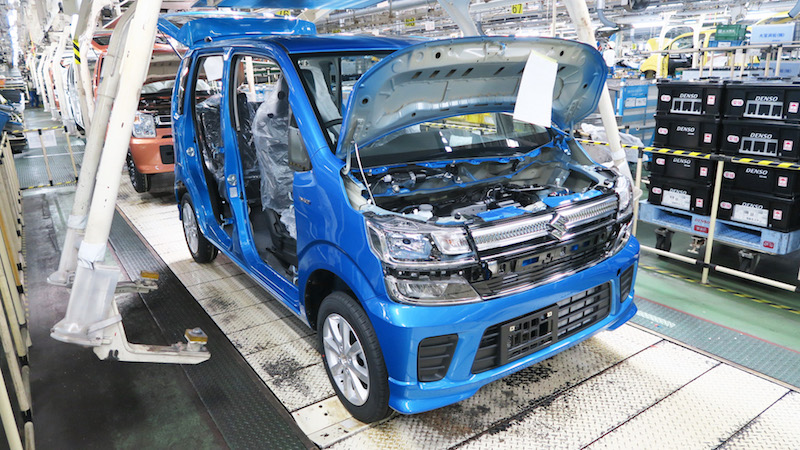 In an industry where mergers and collaborations between major players are increasingly common, Suzuki remains something of an outlier. It has largely eschewed wide-ranging, large-scale alliances with other vehicle companies, especially since its joint venture with GM ended in 2009. Its much-heralded cross-shareholding alliance with Volkswagen, designed to help VW especially improve its offering in the small-car market, was sort lived and ended owing to what VW’s CEO Matthias Mueller called “cultural divergence”.

A planned link-up with Toyota was announced in October 2016 and by February 2017 the companies had reportedly progressed to “concrete examinations”, focusing on safety, IT, environmental technologies and potential component sharing. Since then it has not moved far beyond the initial talking stage and there are parallels with the failed Volkswagen alliance, in that the giant OEM is looking to learn as much from its smaller partner. Whether this latest venture will prove more successful for Suzuki is open to debate, especially as Toyota’s CEO has admitted that his company has not always been very good at making alliances work.

As well as producing mainly kei vehicles, Suzuki’s Kosai plant is the centre for its global CKD operations

Suzuki has become increasingly dependent on markets outside Japan for much of its growth in recent times. Although Japanese production grew last year and has continued to rise this year, its sales in Japan have fallen. Financial results for 2016/17 showed a 1% fall in revenue, mainly due to declines in kei cars and contract production for other vehicle companies. Overall, however, profits have risen due to sales growth in India and Europe, with the result that the company was able to increase its dividend payout by more than 15%. Its Indian operation still reports separate financial results, with revenue in the last financial year up 18.5% and net profits up nearly 37%.

A pioneering passageSuzuki was one of the first Japanese vehicle companies to establish a significant presence in India. It had held a minority 26% stake in Maruti for several years, raising it to 40% in 1987, 50% in 1992, before taking a controlling 56.21% stake in 2013. Its share has remained at this level since then; and Suzuki has a dominant market share in India as well, just over 50% in 2016.

Globally, however, Suzuki was the ninth-largest vehicle company, according to OICA statistics for 2015. That year it produced close to 3m vehicles, ahead of both Renault and PSA, and a similar number, just over 3m, were made in 2016. These figures reflect production in Japan, India, Thailand and Hungary, where it has full manufacturing facilities, and several CKD sites around the world.

Chinese production of Suzuki models is counted within the numbers for the OEM’s joint ventures with Changan and Changhe; the Changan partnership produces some of the SX4 S-Cross sold in China, with others imported from India. In addition, Changan Suzuki imports the Ignis compact car from Japan. The future of the Changhe JV is in some doubt as Changhe itself is now majority owned by BAIC.

Rising outputSuzuki has seen its production volumes rise in recent times. In the last financial year from April 2016 to March 2017, it produced just under 3.1m vehicles, a 4.2% rise on the previous year, with around 874,000 vehicles made in Japan, and 2.2m outside its home market. While overseas production increased for the fifth consecutive year, the 1.5% rise in Japan was the first time Suzuki’s domestic production had grown for two years. Approximately 139,000 (or 16%) of Japanese production was exported. 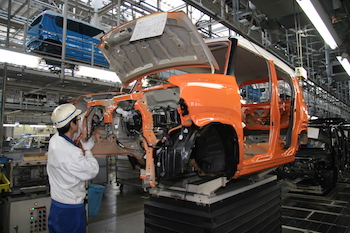 As well as producing mainly kei vehicles, Suzuki’s Kosai plant is the centre for its global CKD operations

Production network for Japan and IndiaIn terms of its global manufacturing footprint, Suzuki produces vehicles in 11 countries, with its principal production bases being in Japan and India. In addition, there are full production plants in Thailand (from where the Celerio entry model is exported to Europe) and Hungary, which supplies the S-cross for Europe and Japan, and the Vitara for Europe as well as global markets outside Japan. Production of the Celerio for Europe switched from India (where only Euro 4-compliant vehicles are made) to Thailand in mid-2014; the Thai plant is equipped to make Euro 5-compliant vehicles.

Suzuki has six plants in Japan (see previous page): its home plant at Takatsuka in Hamamatsu City; Toyakawa; Osuka; and three sites in Shizuoka. Outside Japan, Suzuki’s main production activities are in India – through its 56.21% stake in Maruti – and Thailand and Hungary, along with a series of CKD plants in Egypt, South America (Brazil, Argentina, Colombia and Ecuador), and production joint ventures with Chongqing Changan and Jiangxi Changhe in China. The Changan JV produces the S-Cross, Alto and Cultus, while the Changhe JV produces the Liana and Splash, as well versions of these Suzuki models for sale under the Chinese brands’ names.

Increasing investment in IndiaThe Suzuki plants in India are its most significant overall, producing more vehicles than in Japan. In the year ending March 31, 2017, Suzuki produced 1.59m vehicles in India. Most of the production was for the domestic market, with just 124,000 exported in the last year to more than 100 countries worldwide, including several European markets, as well as most of Asia and Africa. In addition, in a highly symbolic move, exports of the Baleno hatchback to Japan began in 2017, the first Indian-made car to be sold in the country.

Maruti Suzuki’s top export models are: the Alto, Swift, Celerio, Baleno and Ciaz; and its leading export markets are the Sri Lanka, Chile, the Philippines, Peru and Bolivia. The Indian operations also export a light commercial vehicle, the Super Carry, to South Africa and Tanzania, with Suzuki intending to export to other African markets in due course.

In addition to original Maruti plants in India, the company has also opened its first wholly owned plant in the country. This factory, in Gujarat, started production in early 2017 and will supply both the local market and export destinations, in Europe, Africa and Japan (notably with the Baleno). The two plants on the Maruti side of the business – at Gurgaon (with a 700,000-unit annual capacity) and Manesar (800,000 units) – both operated at full capacity in 2016. The new Gujarat plant adds another 250,000 units of annual capacity; furthermore, a second plant at Gujarat will be open by the start of 2019, raising Suzuki’s total capacity in India to as much as 2.25m units per year.

Toyoda Gosei, for example, has opened a new plant to supply the Suzuki Gujarat factory with airbags and weather-stripping. Meanwhile, Mitsui Chemicals and its Korean partner, SK Chemicals, are building a factory to manufacture polyurethane seat covers for the Suzuki Gujarat plant from 2019; however, this facility will certainly supply other factories because it will be able to make seat covers for 1m vehicles a year. 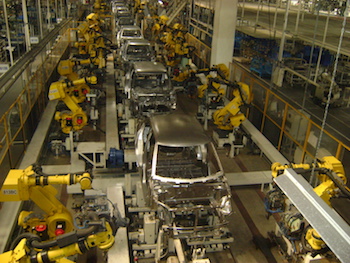 While Suzuki has expanded Indian production capacity in cars and conventional powertrains, it is also moving into electric-vehicle battery production. The OEM has established a joint venture with Toshiba and Denso to make lithium-ion batteries at a plant which will be in production by the end of 2017, supplying cells for Suzuki’s growing range of plug-in hybrid electric vehicles sold in India.

Suzuki is also investing in its R&D facility in Haryana state, planning to spend 19 billion rupees ($280m) there by 2019. In parallel, the Maruti Suzuki side of the business is setting up an institute in Gujarat that will train 300 new engineers a year.

Expansion in EsztergomIn 2016, Suzuki’s plant at Esztergom, Hungary, made just over 211,000 vehicles and passed its three-millionth vehicle milestone in April 2017. Last year, Suzuki confirmed it will be improving the factory’s production and logistics systems with an investment of 5.3 billion forints ($20.6m), funded by 2.71 billion forints from Suzuki in Japan and 2.59 billion forints from the EU. The investment will prepare the plant for laser welding and develop a new polymer research programme in cooperation with PEMU, a local supplier of injection mouldings and foam parts to Esztergom.

Although, like many Japanese car companies in Europe, Suzuki has encouraged existing key suppliers to locate close its Esztergom factory, it also makes use of domestic sources. For example, for the new Vitara SUV in 2015, Gyor-based Raba was given a six-year contract to sew seat covers and head rests, press seat pans, weld the seat frames, and produce both seat hinges and wire frames for seat backs. This continues a long-established supply arrangement, and in fact means that Raba supplies these parts to all Suzuki models currently made in Hungary.

• The OEM’s home plant, at Takatsuka in Hamamatsu City, focuses on motorcycle engine production, as well as HQ functions associated with the car arm of the business• Kosai in Shizuoka mainly covers mini or kei vehicles, including the Wagon R, Alto, Lapin, Spacia and Hustler. The plant has a capacity of around 650,000 vehicles a year and also produces engines. It is the centre of the company’s CKD operations, shipping parts across the globe• Iwata, also in Shizuoka, has a capacity of around 280,000 vehicles and focuses on four-wheel-drive vehicles (Jimny and Vitara) and mini-trucks such as Carry and Every• Sagara, at Makinohara in Shizuoka, is the smallest car plant, producing around 80,000 cars, currently the Swift and similarly sized models; the factory also casts and machines engine parts and assembles engines• Osuka is the company’s largest aluminium foundry plant, casting and machining engine and suspension parts• Toyakawa is a motorcycle plant, and also assembles marine engines