Russia’s automotive market has grown rapidly in recent years, both in sales and manufacturing. AMS looks at the activities of OEM’s expanding into the country.

Renault-Nissan
The French manufacturer has been keen to develop its presence in Russia given the potential of the market. As such the company has made strong alliances with both existing partner Nissan and one of the leading Russian carmaker AvtoVAZ. Renault say its ambition is to both be a leading brand in the B segment and also to create a range of vehicles designed for the Russian car buyer. Renault launched the Logan in 2005, its first vehicle manufactured in Russia, which went on to sell well. The company has since introduced a number of other models to extend the range. One in four vehicles sold in Russia are 4x4 and the company launched its new Duster model this year to join the existing Koleos SUV. The Duster, along with the Logan, Sandero, Fluence and Mégane are all produced at the company’s Moscow plant.

The partnership between Renault, Nissan and AvtoVAZ has enabled them to pool their respective production capacities. Between them the three companies (at three production sites) have a total capacity of 1.1 million vehicles per year with the aim to increase this to 1.6 million vehicles by 2016. 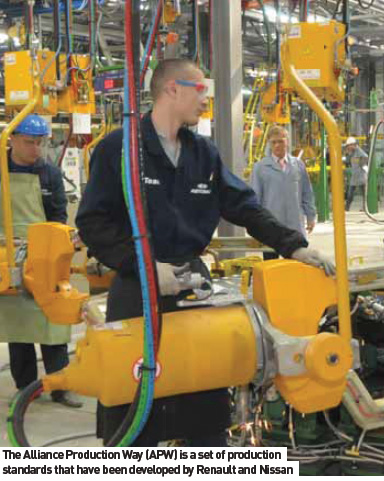 The partners are also working together to develop and integrate production processes. The Alliance Production Way (APW) is a set of production standards that have been developed as a combination those used by Renault and Nissan. This has provided both standardization of processes and improved quality across the three brands. AvtoVAZ applied APW to the Lada Kalina line in 2011 and it is being extended to other production lines. As part of a programme to modernize AvtoVAZ the Russian government financed the training of Russian engineers and technicians on vehicle and powertrain engineering, manufacturing and quality, at Renault group sites in countries including France, Romania and Turkey.

Future plans include the shared development of chassis and powertrains and the establishment localised production of components, running gear, engines and gearboxes, specifically for vehicles sold on the Russian market. There are also plans to develop additional production capacity in the far east of the country, to benefit from geographical proximity to the sites in South Korea and Japan.

AvtoVAZ
May this year saw the signing of a non-binding agreement between Renault-Nissan Alliance, AvtoVAZ, Russian Technologies and Troika Dialog to contribute their respective stakes in AvtoVAZ to create a joint venture that will control the Russian carmaker. Renault bought 25% of the company, best known for its Lada brand of vehicles, in 2008 and is investing US$300 million in the joint venture. 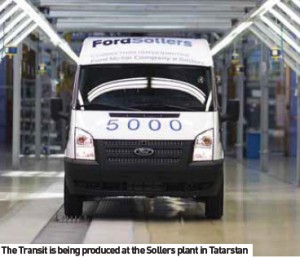 As part of a process to increase the localisation of vehicles made in Russia, Ford Sollers is manufacturing engines and provide stamping operations. The Russian car company provides a range of services in the automotive sector including sales and service operations as well as production. Sollers owns five automotive plants in Russia, an engine plant and a network of dealerships. Successfully implementing projects with international OEMs the Sollers group has become one of the largest Russian producers of passenger cars and light commercial vehicles.

Volkswagen
Volkswagen is investing almost €250 million to construct a new engine plant in Russia. The new plant at Kaluga will produce the new 1.6 litre petrol engine from the EA 211 series as of 2015, with planned capacity is set at 150,000 units a year. “Russia is the primary strategic growth market in Europe for the Volkswagen Group. By 2018 we intend to sell a half a million vehicles here annually. To this end we will once again be investing approximately 1 billion in local production and new models”, said Dr Martin Winterkorn, chairman of the Board of Management of Volkswagen Aktiengesellschaft.

The 30,000m2 engine plant is being built directly next to the Volkswagen vehicle plant in Kaluga. When production 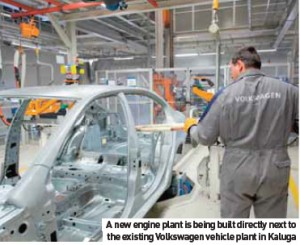 commences the new facility will supply engines for the vehicle production of the Volkswagen Group Rus in Kaluga as well as the contract production in the GAZ plant in Nizhny Novgorod. Production will include crankcases, cylinder heads with assembly integrated, crankshafts as well as the complete engine assembly. With the construction of the engine plant, Volkswagen is expanding its industrial commitment in Russia. At the same time, the Group is fulfilling the targets agreed with the Russian government at the end of May 2011 in the ancillary agreement to decree 166. This determines that, as of 2016, at least 30% of vehicles produced in Russia will be equipped with engines that were manufactured locally.

General Motors
General Motors is planning to invest $1 billion over the next five years to expand its car and component production in Russia. The company has commenced work on the expansion of its St. Petersburg facility with the aim of doubling production to 230,000 vehicles per year. The expansion will add production of the Astra sedan at the plant, which currently builds the Chevrolet Cruze sedan and Opel Astra hatchback. 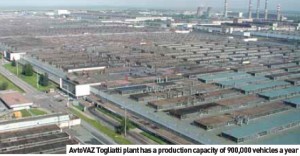 As well as increasing production capacity, the investment will also go into increasing the localised sourcing of components. The company, which produces cars in Togliatti, Kaliningrad, as well as St. Petersburg, is to increase production of the Chevrolet Niva SUV, being made in a joint venture with Russia’s AvtoVaz. The increase in production of the Niva from70,000 to 120,000 units per year will bring GM’s total production in Russia to 350,000 vehicles annually.