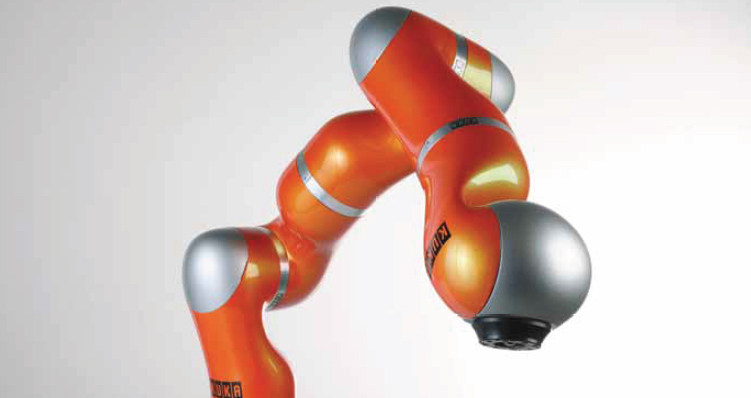 Kuka Roboter, the robotics division of Kuka, offers equipment to suit almost any production requirement. Such flexibility has won the company an impressive client list: Audi, BMW, Daimler, Ford, Opel, Porsche and Volkswagen are all Kuka customers. Further to this, the range of robot sizes and payloads offered by Kuka has attracted many automotive suppliers, including: Allgaier, BBS, Bosch, Brose, Continental, Kautex, Linde+Wiemann, Peguform, Plastic Omnium, Rehau and Schuster. 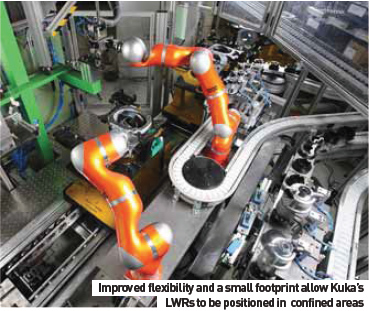 While much has been written about heavyweight robots taking over many of the applications previously completed by larger, heavier and more complex material handling equipment, the most exciting advances are now being made in the area of smaller and lighter robots; the equipment behind new man-machine interfaces. AMS spoke with Dr. Johannes Kurth, Head of Research and Predevelopment at Kuka Roboter to uncover more details about the company’s latest products.

Kuka has had a challenging recent history, the sale of the company followed by the loss of its management team, only for it to be bought by new owners who reinstated the original management. How has this affected spending on R&D within the company? “The percentage of turnover available for R&D will be around 7%, as compared to the classic machine and line-building industry model of 3 to 4%,” responds Kurth. “The robotics industry is very much innovation-driven and the innovation cycles are quite short. We have to spend more money on R&D to keep our technology leadership position.”

While Kuka Roboter has successfully globalised its sales and production footprint, the R&D function has remained in Augsburg. Kurth believes this is the right decision. “I think keeping the departments in once place can help improve communication between all departments. As robots are mechatronic machines, we need a close working relationship between electrical, mechanical and software engineering.”

Engineers and inventors
With the fluidity of skilled and unskilled labour in the new Europe, does Kuka draw its engineers and innovators from the traditional German technical universities and colleges, or are applications coming from other areas, Eastern Europe, China and India? Kurth: “We are attracting and taking on people from the West and the East. In R&D, we are looking for people who have excellent knowledge in certain fields, so we are looking for people who have worked in specific technical areas of robotics during their university and college time. They could be coming from Germany or abroad. For us, the qualification is the most important issue.” 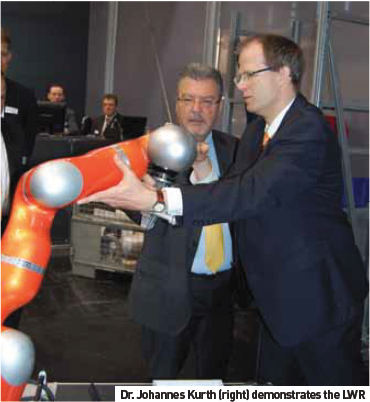 The robot touch
A presentation of the new Kuka LWR4+ lightweight robot showed it working in a powertrain assembly cell, placing a differential assembly into a casing. Comprising a heavy assembly, this is an awkward and ergonomically-challenging job well-suited to automation. On the other hand, a large part of powertrain assembly operations involve clearance, tolerance and backlash checking and adjustment, which usually demands the presence of a skilled operator to make fine adjustments using shims or threaded components. Could robots take over this type of complex function? “We are very close to having robot capability to replicate the human touch,” says Kurth. “With the torque sensors and high performance control algorithms, we have a robot arm that can ‘feel’ clearances, fit tightly-fitting parts together. The robot could use the resistance of an assembly to make a decision as to which shim to use or which adjustment to make.”

Trig-by-contact
Trig-by-contact refers to how the robot switches between modes. It is an event-driven process, initiated in this case by direct contact.  “The robot has different control modes,” says Kurth. “The first is a position control mode; in this mode the robot behaves like a normal, classical position-controlled robot. Then we have the Cartesian compliance mode. With this, we can change the behaviour of the robot, we can change the stiffness and the damping. Now, with trig-by-contact, we can switch from one mode to another. In the example of the differential assembly, we first position the robot with the position control mode; in this mode the robot is very accurate. Then we go into the contact, but as soon as the robot detects a contact with its torque sensors, the controller switches into the compliance motion mode. Then the robot has the desired behaviour that we need in order for it to fulfil the next assembly operation.”

The technique is similar to one in use at Jaguar, the carmaker using ‘soft force’ robots for wood polishing. During the 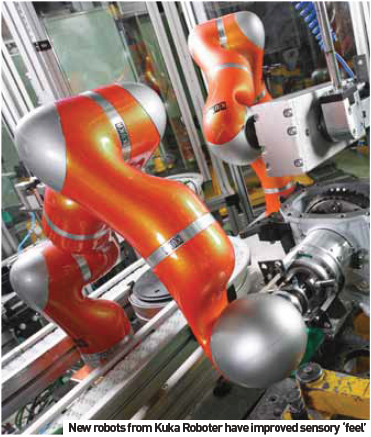 process, the robot actively measures the resistance of the material being worked on, adjusting its applied pressure. This avoids overheating the surface and damaging the wood or lacquered finish. Kuka’s lightweight robot could be a perfect fit for operations like this. “We have not yet investigated all possible applications of the LWR,” explains Kurth. “We started with assembly jobs, placing clips, etc., but polishing could be another interesting application because there we could use the compliant motion characteristics. You need the compliant motion aspect to generate a certain force on the work surface.”

New robot – new materials
Traditionally, robot arms, bases and general structures have been made from cast iron, to give the stiffness and integrity required by their weight. Lightweight robots have used aluminium castings, but only in certain special applications that include workplaces where non-sparking characteristics are essential. “The first generation of the LWR was made of fibre-reinforced plastics and the latest version uses aluminium castings; now we have thin-wall casting technology available.”

Die grinding and toolmaking have traditionally been the preserve of highly-skilled manual operators or, in large die manufacture, the work of heavyweight robots. Could the LWR work in smaller die-making operations, perhaps in injection moulding dies for smaller automotive parts? “Grinding could be an interesting application, depending the forces needed to move the cutting or grinding tools,” says Kurth. “I believe that in such applications the LWR can bring benefits, as the programming will be much easier than with a ‘classical’ position-controlled robot. This is because one can generate a set of behaviours or moves that guarantee a constant contact force, even when following the most complex contour. This applies even when one does not know the contour 100% in advance, due to the feedback from the robot head influencing the robot path.” 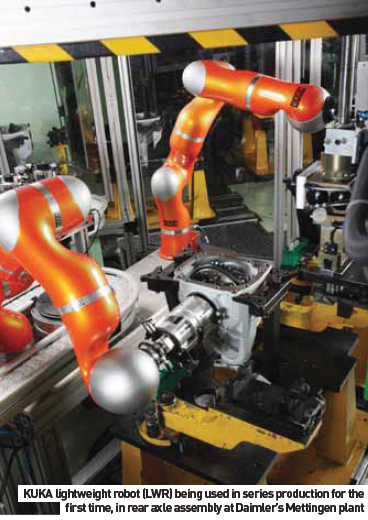 Motion control mechanism
The LWR features a relatively standard construction, using an electric motor, standard gearbox drive and sensors for position and torque. Each axis of the robot’s action is servo controlled, using the controller located close to the arm to operate the servos and calculate force using feedback from the sensors. This gives great accuracy compared to some larger robots but, when compared to the close tolerances achievable with a machining centre, robots are hampered by their open kinematic operation. As such, the LWR will work to a repeatability of 0.05mm. Kurth: “This (super accuracy) is not our main objective with the LWR, we believe the main benefit of the LWR is its ability to react to episodes which are positional – parts that are not positioned correctly.”

Efficiencies in cost and capacity
Is it possible to justify the need to purchase several smaller robots in place of a single larger machine? Kurth says that this would have to be looked at on a case-by-case basis covering the full design process. “The LWR will lead to the simplification of the required toolset for each operation. If we look at robotics today, very often the tool costs more than the robot. With the LWR, while the robot arm will be more expensive, the grippers and other actuators may be much simpler and cheaper.”

Increasing the carry capacity of the LWR will also improve its range of possible uses. “The first step will be to series produce a 7kg-capacity robot. We will then investigate how to increase the payload without losing its unique performance characteristics.”

The LWR appears to lend itself to intricate work applications, such as spot soldering stations, powertrain assembly processes and small paintshop applications where airborne fluxes, oils and paint can affect sensitive sensor equipment. While Kurth would not be drawn on specifics, he agreed that the robot could be ‘proofed’ against these environments. “These ideas are in development and are well within the capabilities of both the robot and our engineering teams.”

A saturated market?
With the reusability and extended working life of robots, with the exception of new plants, new robot purchases are few and far between. As such, many robot makers have attempted to offset this virtual saturation of the robot market by offering robots that can take over handling tasks previously completed by much larger and more expensive equipment.

Following on from the idea that customers already have all the robots they would need for the foreseeable future, was the LWR an attempt to create a niche market that didn’t exist before the model’s introduction? Kurth says that various assembly areas, including powertrain and other smaller operations, can genuinely benefit from robotising some previously manual processes. “We believe that there is more than a niche market for the LWR; if one considers the degree of automation in assembly, it is relatively small. If we can bring the right product to the market and automate some exclusively manual operations, we can create a market. Thinking outside of automotive and even outside of industrial applications, we can imagine it being used in a range of manufacturing areas, perhaps medical applications. We firmly believe the revolutionary aspects of the LWR will create an exciting new market.”