With current demand for lightweighting so voracious, there are many applications in which OEMs are looking to spot weld mixed-material assemblies

Trumpf's I-PFO is suited to the laser welding of doors, seats, sun roofs and other large body parts

With high thermal and electrical conductivity plus the very high electrical resistance of aluminium oxide, which forms naturally on the material’s surface, it’s clear that spot welding aluminium alloys is far from straightforward. However, the weight savings are such that there is increasing use of this material, despite its apparent lack of strength. In fact, when comparing similar thickness materials, the static and fatigue shear strengths of aluminium alloy spot welds are about a third of the value of steel welds (depending on the alloy type). As a result, where aluminium is used instead of steel its gauge is normally increased, giving weld strengths which compare more favourably with those of steel – but still enabling weight savings to be made.

Mixed material weldingThe demand for lightweighting is so voracious at present that there are many applications in which auto OEMs are looking to spot weld mixed-material assemblies. GM, for example, recently proclaimed itself the first automaker to weld steel to aluminium using resistance spot welding, a technique it spent some two years developing. The solution had to overcome issues such as the circa 900°C difference in melting points between steel and aluminium, surface oxides that compromise weld integrity, and the tendency for a ‘glassy’ layer to form between the two materials, causing brittle welds.

In all, there are 19 patents covering hardware and controls for the new process, with GM’s success in this area underpinned by a grant from the US Energy Department to the tune of $1.3m.

Speaking at a recent media event, Blair Carlson, GM’s lab group manager for lightweight material processing, said that the new technique is being deployed on joining aluminium brackets to a steel framework on part of the seat-back for the Cadillac CT6 luxury sedan, which is built at the company’s Detroit-Hamtramck plant. The company is also planning to use the process for joining a steel pedestrian protection reinforcement component to an aluminium bonnet inner panel on the same vehicle. At present, the welding tip, developed by GM, typically requires dressing after 20 welds but the goal is to move this into the hundreds as part of ongoing research.

Moving forward, there is clear potential to make significant weight savings from mixed-material assemblies. For instance, welding an aluminium roof to a steel body could reduce mass by around 50% in comparison with existing structures. GM is also exploring the greater use of magnesium, which is even lighter than aluminium, for inner door panels.

In other developments at the company, a dual-beam laser has been introduced to GM’s aluminium-to-aluminium laser-welding process, which helps reduce spatter, while a redesigned aperture plate controls reflection. With a more optimised shape, the upgraded aperture plate has been used for more than 3,000 vehicles, as opposed to just 30 previously, and remains in service.

Developing the next ‘big thing’At technology providers, the race is on to develop the next ‘big thing’ in resistance spot welding. Making a decent claim is WeldComputer, which has been awarded a patent for its latest innovation. The patent covers a method for formulating a composite measurement of the actuator mechanism motion and apparatus deflection linkages on resistance welding equipment, thus providing a more accurate measurement than either could provide alone. This has led to the introduction of a new process that provides a practical method for instrumenting new and existing welding guns to obtain the real-time information needed to assess and control the quality of each weld as it is being created.

For the past 30 years, the company’s technology has been routinely deployed on press-type and rocker-arm resistance welders to monitor weld thermal response, one of the parameters needed to evaluate weld nugget growth and adaptively control the welding process. However, according to CEO Robert Cohen, this type of measurement has been less than ideal in automotive applications.

“In the case of automotive-grade welding guns,” he explains, “due to non-linear high friction in the actuating mechanism, only a portion of the thermal expansion and contraction translates into measurable motion. The remaining part of the thermal response instead causes deflection of the linkages and arms on the welding apparatus. This problem is exacerbated when servos are involved because they often have sluggish and inconsistent responses to quick thermal-mechanical transients.

“As demand for detecting bad welds – and more importantly preventing them from occurring in the first place – continues to increase, deployment of this technology will help improve weld quality and reduce product defects in automotive applications,” adds Cohen. 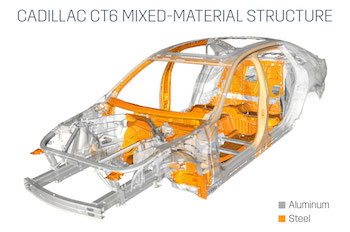 On the DeltaSpotElsewhere, the DeltaSpot system from Fronius continues to prove attractive; its technique features a continuous process tape that runs between the electrodes and sheets being joined. According to the company, this results in greater precision and high electrode service life whereby the regular cap milling of electrodes is no longer necessary.

The process tape means that electrodes are effectively protected against wear due to pick-up: the tape transfers the welding current and simultaneously protects the contact surfaces of the electrodes from contamination by aluminium, zinc or organic residues. Depending on the application, electrode service life of up to 30,000 spots is possible. Furthermore, the coating of the tape has proved to be particularly advantageous for aluminium sheets. Here, optimised contact prevents spattering on the sheet surface and any associated damage to components.

Due to the high electrical resistance of the process tape, during welding, thermal energy is transferred from the outside to the inside. This is said to deliver up to 50% less energy consumption in aluminium applications.

Among the latest developments from Trumpf, for both spot and seam welding is the I-PFO (programmable focussing optics) for lasers that facilitates production on the fly in robotised applications. The solution is based on a robot that continuously transmits its position and movement data to the I-PFO, enabling the latter to recognise positions in the working area of the robot cell, so that welding locations are precisely known.

The device forms the laser beam by adapting the focus diameter, depth of focus, image distance and power density to the desired process. With the aid of two deflection mirrors inside the optics unit, the laser can be aimed at all positions in the X and Y axes within the processing area for spot or seam welding. A likewise moveable lens focuses the laser beam on the Z axis.

Neither the workpiece nor the optics unit need to be moved for 3D applications. During processing on the fly, the optics unit sits on a freely-moveable manipulator, namely an industrial robot. The automotive industry is a prime target area for the device, particularly with regard to the laser welding of doors, seats, sun roofs and other large body parts. Importantly, several units can be operated with a single laser.

Up to now, implementing remote processes has proved expensive and time-consuming. However, the I-PFO demonstrates its intelligence first and foremost by autonomously starting processing whenever the geometry and process technology make it possible to do so.

Of course, laser welding also creates new lightweighting opportunities for steel materials. Here, the combination of laser-welded blanks (LWB) and press-hardened steels (PHS) is one of the increasingly popular solutions available to OEMs looking to reduce the mass of their vehicles, improve crash performance and make cost savings. The technology allows steels of different grades and thicknesses to be combined in one part, therefore maximising the lightweighting potential of steel.

ArcelorMittal has recently commercialised two new PHS grades which can be used together in laser welding and the production of LWBs. Known as Usibor 2000 and Ductibor 1000, the steels have very different properties. While the former gives the part its strength, the latter provides crash ductility in applications such as door rings, front and rear rails, and the lower portion of B-pillars. The combination of both grades in a single part allows additional weight reduction – estimated at up to 26% in comparison with existing solutions.

Both grades come with an aluminium coating to prevent corrosion. However, the presence of aluminium can affect weld quality. To mitigate this, ArcelorMittal has developed a patented ablation process that strips the aluminium coating along the weld line, resulting in a fully-functional weld.

By 2022, the market for LWBs is expected to reach 40m parts annually in Europe, and over 45m a year in North America.

Of course, the industry’s continuing lightweighting efforts have in general witnessed a reduction in the thickness of materials used for fabrication. This is why the AC GMAW (gas metal arc welding) process from Lincoln Electric is specifically designed to make it easier to weld very thin materials by reducing the heat input required.

Down to the wireThe vast majority of GMAW for all materials is performed using DC, with the wire at positive polarity. However, Frank Armao, director aluminium technology at Lincoln Electric, says there is an aspect of AC GMAW that makes it particularly attractive for welding aluminium.

“By adding an ‘electrode negative’ component to the arc, the penetration and the energy in the arc is reduced,” he states. “This is quite beneficial in welding thin (0.8 to 3.0mm) aluminium. Additionally, by varying the amount of electrode negative time (as a percentage of the total), penetration can be varied and controlled to the advantage of the manufacturer.”

With these factors in mind, the company’s Advanced Module has been designed to fit and work with any of the third-generation Power Wave power supplies manufactured by Lincoln Electric, adding AC capability to these modules at minimal cost. The development demonstrates that it is possible to use AC GMAW as a way to reduce heat input over conventional spray-transfer welding. Furthermore, the process can facilitate increased deposition rates and travel speeds while using the same heat input required to weld (with a smaller wire at a lower travel speed) using conventional techniques. The process is designed specifically for thin aluminium, and loses its advantages above thicknesses of 3mm. 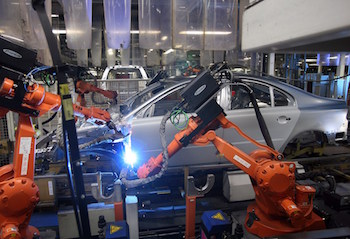 Volvo focusing on maximising output, has to make sure all of its welding systems are in perfect working condition

Due to growing market demand for Volvo's S90, V90 and XC90 models, the automaker’s Torslanda factory in Gothenburg, Sweden, is now running three shifts during the week, plus a weekend shift. This has led to a drastic reduction in the plant’s maintenance window. However, with Volvo focusing on maximising output, the company has to make sure all of its welding systems are in perfect working condition.

So when the plant recently considered optimising the preventive maintenance of its spot welding guns, it turned to resistance welding specialist ARO.

In just a few weeks, ARO handed in a comprehensive maintenance proposal for all 331 welding guns on site, while conforming to Volvo's strict timing constraints. In a short period of time, all guns were inspected and realigned for trouble-free operation. Production at the plant quickly resumed to full capacity, and the maintenance contract is now entering its second phase, which is set to run over 18 months.