Additively manufactured metal parts present a challenge for high-volume production but at the other end of the scale, engineers are successfully developing the process for specialist, low volume parts. Mike Farish reports

All over the automotive industry companies are exploring the potential of additive techniques to make parts in polymers and metals, but the breakthrough to the use of additively manufactured parts in high-volume automotive manufacturing, specifically in metals, is yet to occur.

That is certainly the belief at General Motors, where at the moment there are stated to be “no metal additively manufactured parts” in any of the vehicles the company has produced. Currently, the US carmaker’s use of additive techniques is confined to rapid prototyping applications using polymer materials, adds Anil Sachdev, laboratory group manager light metal systems for GM Global Research and Development, based in Warren, Michigan.

• Fact, not fiction• From prototypes to production

However, this situation is not because GM or any other volume carmaker is indifferent to the potential advantages additive techniques offer. Sachdev notes that despite the increasing sophistication of additive technologies, some real impediments remain to their adoption as high-volume automotive manufacturing procedures, particularly if the materials involved are metals.

He states that the question, particularly with metals, is: “How are we going to take additive techniques and enable them to make a million parts – a figure that is still quite small for the volume automotive industry, but which is monumental for additive technologies?”

It is a concern made more acute when you take into account that the automotive industry is a pioneer in the use of additive techniques for prototyping in polymeric materials and also remains the major user today of the metal powders that are the essential raw material for metals-based additive techniques, albeit in non-additive applications. So why has the industry’s familiarity with both the technology and the materials failed to realise high-volume additive production of metal parts?

Limiting factorsAccording to Sachdev, GM has identified two key factors inhibiting this application. They concern technical and business issues. On the technical side, Sachdev says three factors are involved: size, accuracy and materials. Firstly, he observes that metals-based additive machines on the market today have a maximum envelope of around 400x400x400mm, which is sufficient to make, for example, some engine and transmission components, but obviously inadequate for, say, body panels or the moulds from which such parts are made. Secondly, Sachdev points out that the automotive industry is “averse to post-processing” and wants production processes that as far as possible achieve net-shape on a first-time basis. Quite simply, it does not want to “pay twice” for finished parts.

There are also issues regarding suitable materials. Sachdev points out that the emphasis has been to optimise properties of metals for traditional manufacturing processes, such as stamping, casting and forging. So it’s not easy to translate them into the realm of additive techniques without further development. Similarly there are challenges with throughput and cost. On throughput Sachdev indicates that the disparity between what is currently achievable by additive means and what would be required to match the performance of existing processes, is enormous. Additive parts can take “hours” to make whereas a stamping operation for a body panel might take “ten seconds”. “Clearly throughputs are off by a couple of orders of magnitude or more,” he states. Also, the sort of costs that might be acceptable when manufacturing very low volume, even uniquely customised parts, are not supportable with the sort of numbers associated with volume automotive manufacturing.

Overcoming the challengesNevertheless, Sachdev believes that if these obstacles can be overcome there are real benefits to be had. One he identifies would involve the “consolidation of parts” – in other words reducing assemblies of multiple parts to single homogeneous units. He points out that additive technologies lend themselves to making parts in which conventional techniques are hampered by factors, such as awkward geometries, that make tool access to their interiors problematical.

Meanwhile, a more profound application of the technique would involve the “integration of functions.” Sachdev says the ways these issues might be solved will be quite distinct. The size challenge, for instance, will be “largely a matter for the machine builders,” while cost will “shake out when we put everything together.” Therefore, materials, throughput and accuracy will be the areas in which the automotive industry itself will have to take a lead.

Sachdev indicates that the area in which major research efforts are being made in the industry at the moment is probably materials – specifically the formulation of alloys that will allow for consistency of process – and those three areas are linked to each other. Considerations of throughput follow on naturally from those of material composition and the fact that the heat to be managed in the manufacturing processes will raise questions of possible thermal distortion and of ultimate part accuracy. Hence, he concludes:“Accuracy is the ultimate outcome of the work, assuming we have designed the alloy and the process so that they meet the property objectives.”

Success in small volumesAt smaller volume levels, the use of metal-based additive techniques is already a reality within the automotive industry. Strategy lead Ben Farmer at HiETA Technologies in Bristol, UK, explains how the company “has been addressing the question of whether it can realise a new generation of compact, high-performance heat exchangers using additive machines and, in particular, through the use of the laser powder bed fusion technique.”

“Our heat exchangers are about five times smaller than those you can get elsewhere,” Farmer says, adding that the company has a series of “product categories” – low temperature products in aluminium and high-temperature counterparts in nickel-alloys or stainless steels – that can be used as the basis for customised solutions according to requirements.

“We don’t manufacture to other companies’ designs but we create new shapes that would previously have been difficult or even impossible to manufacture,” he states. “Everything we make is effectively unique.”

Farmer also confirms that the company has for the most part relied on machines from Renishaw. An example of the type of part these AM250 Plus-Pac SLM (selective laser melting) machines enabled the company to produce was unveiled at the IAA show in Frankfurt last year. This was a recuperator specifically for the RANGE+ engine from Mitsubishi Turbocharger and Engine Europe (MTEE). Made from Inconel 625, the unit employs HiETA’s proprietary heat transfer surfaces along with integrated manifolds to reduce piping losses. It’s also HiETA’s largest ever heat exchanger, a laser-welded assembly of five separate additively manufactured components.

But recently HiETA has taken delivery of a new RenAM 500Q machine from Renishaw, which, Farmer notes, represents a step-up in capability. That is because unlike previous single-laser models the new machines have four laser sources. The main benefit is said to be “a reduction in piece-part cost” though Farmer adds that the new machine should also improve accuracy.

Farmer says the new machine provides a fundamentally important factor for finished parts – that they are completely isotropic, in other words provide equal strength in all directions. While individual part size is limited, as with all additive machines, by an immediate working envelope, in this case one of 250x250x350mm, he points out that larger fabrications can be achieved by joining individual parts together, whether by welding or mechanical fastening.

For the future, Farmer also says HiETA will be looking to exploit the potential of a new material in an automotive industry context; this is a “nickel super alloy” with the technical name CM247LC, which is already well-established for use in the aerospace industry. Over the last couple of years HiETA has been working to establish the necessary “parameters” to enable it to be used as a material for the additive manufacture of automotive parts, in particular turbine wheels.

Farmer explains that the material has previously been regarded as “unweldable” – something that obviously militates against its use in a laser melting process which, as he points out, is effectively a “mini-welding” procedure. Accordingly, the work carried out by HiETA has addressed issues such as appropriate laser powers, though he does not go into the details.

But Farmer does state that the material can operate at significantly higher temperatures than previously available materials. He says its own properties probably add 100°C so that, coupled with appropriate design, operating temperatures as high as 1,200°C should be attainable. He confirms that HiETA has already made parts with the material for automotive customers. 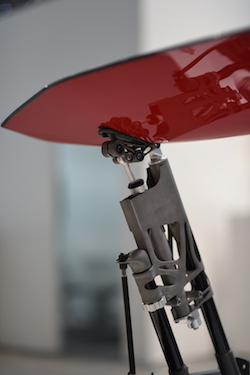 At Bugatti, the goal with hydraulic wing control assembly was to produce hollow rods with thin walls and reinforcement ribs on their backs with wall thicknesses between 0.8-1.2mm

Aerospace tech for supercarElsewhere, one OEM operation that is pushing the boundaries of metals-based additive manufacturing in its R&D activities is the Bugatti Development Department in Wolfsburg, Germany. Earlier this year it announced it had cooperated with additive specialist Laser Zentrum Nord in Hamburg to make the first ever 3D-printed automotive brake caliper using a titanium alloy previously used in exacting aerospace applications. The dimensions of the caliper are 41x21x13.6cm despite which it weighs only 2.9kg. Its resilience, however, is still considerable – its tensile strength is 1,250N/mm2 which means it can withstand a force of 125kg per square millimetre without rupturing. This makes it tougher than the brake calipers used on Bugatti’s recently released Chiron sports car, which are machined from aluminium and weigh 4.9kg each.

The development could herald a significant breakthrough in the automotive use of titanium, since its toughness normally makes it impossible to mill or forge. The unit was made with an exceptionally powerful additive machine at Laser Zentrum Nord, which is equipped with four 400W lasers and which even then took 45 hours to print the 2,213 layers in each caliper. Bugatti says in-vehicle testing of the components is now underway.

This year also saw Bugatti show off a hydraulic wing control assembly that replaced the previous use of solid metal rods with 3D printed, thin walled tubes that helped reduce the weight of the whole system by about 50% compared with a conventional counterpart. According to Frank Goetzke, head of new technologies in Bugatti’s technical development department, this experimental assembly is potentially even more significant than the brake caliper. “In the past we have made 3D-printed metal structures from solid material,” he confirms. “This time the goal was to produce hollow rods with thin walls and reinforcement ribs on their backs with wall thicknesses between 0.8-1.2mm.”

Goetzke says an assembly consists of seven 3D-printed titanium parts and two carbon-fibre tubes. The biggest part, the traversing unit, weighs 790g as against 1,170g for a comparable series production part made using an aluminium extrusion moulding, and has dimensions of 38.5x18x5cm. The additive work was again carried out externally, the machine involved in this case being an SLM500 machine from SLM Solutions. All stiffness and strength tests on the part have, Goetzke reports, been “absolutely positive” though there are no plans to put the assembly into production.

“That has never been our intention,” he states. “We made the parts only in order to test a complete and seamless Siemens software environment from the virtual wind tunnel through CFD simulation to topology optimisation and finally the control of the milling machine.” Nevertheless, he adds, “we have obtained some findings which will be very important for our future work.”