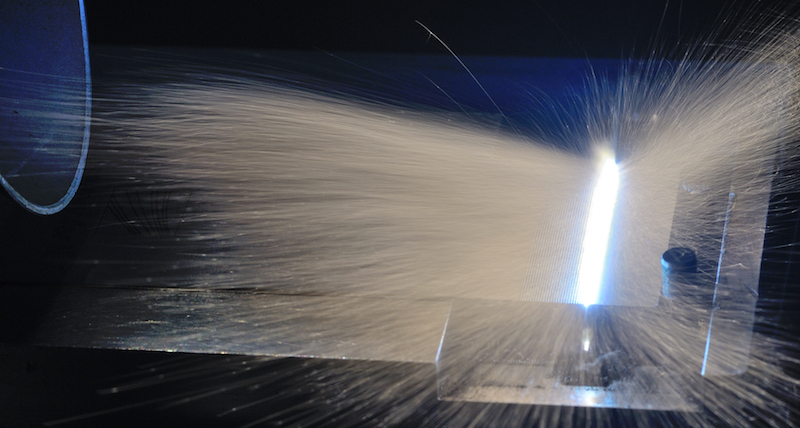 The welding of non-metallic materials is frequently used to create parts such as cabin consoles, lights and mirror assemblies, intake manifolds and fluid reservoirs, including fuel tanks. However, despite being a common process, the practice has not, as yet, reached the levels of reliability in terms of right-first-time product quality that the automotive industry aims to achieve. As such, it is not unusual for OEMs to find themselves spending the equivalent of “several million pounds a year” on related remedial actions, claims Dr Farshad Salamat-Zadeh of the UK’s welding research and development organisation, Cambridge-based TWI.

The reasons for this, he suggests, derive from a basic lack of understanding of the technical complexities of the process at both OEM and tier supplier level. In the first case, he says, part designers sometimes do not possess sufficient knowledge of the process to enable them to specify it, whilst in the second, he believes that part makers can similarly lack an appropriately fundamental understanding of the way the equipment they have bought actually works.

However, this is also a situation that TWI has helped play a part in countering. Two specific initiatives, both with considerable automotive industry involvement, are mentioned by Dr Salamat-Zadeh. One is a training course entitled ‘Welding of Moulded Plastic Components’ that TWI has been delivering for the last three years. Though not specifically aimed at the automotive industry, he says that three quarters of attendees at the three-day course usually come from the sector, ranging from shopfloor staff to product designers.

The second initiative is one that potentially has implications for the automotive industry worldwide. This has been the development over the last four years of an official British Standard covering the joining of thermoplastic materials, which was formally published at the beginning of this year. As with the course, the new standard (BS89100) is not confined solely to the automotive industry but, confirms Dr Salamat-Zadeh, has been developed in close cooperation with several automotive companies including JLR, Ford and off-road specialist JCB. It aims to help establish industry-approved procedures for both implementation and quality control across a wide range of techniques, including ultrasonic, laser, hot-plate and infrared welding.

New industry standardSo, in the real world of automotive manufacturing, what is the current state of plastics welding and the technological developments being introduced to support it? According to Wilrid Dubitzky, product manager for process sensors at laser welding supplier Trumpf, one frequently used technique when plastics are involved is ‘quasi-simultaneous’ welding. This approach is, she says, particularly suited to welding closed contours, such as those on housings for electronic components. As she explains, this means that the laser beam is made to traverse the contour where the join is effected in a rapid, continuous manner, so that the beam passes over each part of it repeatedly. The benefit of this is that all parts of the weld seam are heated up gradually and equally, so avoiding the distortion that might be caused by more localised heat. The fact that the technique also utilises what Dubitzky terms a “scanner-optic”, in which the beam is manipulated by just a couple of mirrors, also means it is “very flexible” with different jobs requiring just a change of program without any replacement of hardware elements.

She adds that in plastic welding applications the laser beams are relatively low-powered. Trumpf’s relevant products are its TruDiode151 and 301 offerings which have power ratings, respectively, of 150W and 300W. That is, she indicates, sufficient for most common types of homogeneous plastic materials and also for those with up to about 30% glassfibre reinforcement. Interestingly, Dubitzky notes that enhanced control and monitoring techniques using a new generation of sensors, rather than anything concerning the beam itself, are key to increasing the consistency and reliability of the process.

Accurate heat control“We are now offering a scanner with an integrated temperature control capability using a pyrometer,” Dubitzky explains. “This enables users to monitor the heat build-up and alter the laser power accordingly.” The crucial thing, she continues, is that this enhancement offers not just quality control but also process control. The device can measure temperatures in the range 200-520°C with an accuracy of 3% at 250°C. Meanwhile, another new capability, she continues, is offered by an “inductive melt travel sensor”. Both products have come onto the market within the last 18 months and both have already been put to real use by automotive customers. Their utility, however, will vary according to circumstances. Heat control, for instance, will be much more valuable where the contour to be welded has a sharp rather than a rounded edge. “The sharper the edge the greater the danger of burning,” Dubitzky explains.

Therefore, she adds, by obviating that possibility this new process control capability has implications for actual product design. Moreover the new sensors also facilitate data collection in line with the precepts of the Industry 4.0 approach to support continuing process enhancement. For example, correlating process data with other data gathered from the laser equipment should, she suggests, help facilitate predictive maintenance. Dubitzky indicates that a number of pilot projects to explore this concept involving undisclosed “big names” are currently underway.

Challenging combinationsMeanwhile, plastics welding technology supplied by Switzerland-based Leister Technologies has helped the Shanghai operation of Magna Mirrors produce an innovative integrated door handle and indicator light, with the materials involved being PC/ABS for the main body and PMMA for the transparent cover. The combination immediately posed some tough challenges, explains Jean-Claude Rudolf, product manager, laser plastic welding, for Leister. “There had to be no damage to the electronics, no material flash, no optical defects and the whole unit had to be watertight,” he states.

In fact, the unit had originally been designed for ultrasonic welding, however the material flash this method produced was deemed to be unsatisfactory, so Leister’s proposed alternative of laser transmission welding using the contour method was adopted instead. According to Rudolf, this technique is the appropriate one for ensuring transparent and absorbing parts are bonded together. “The laser beam penetrates the transparent plastic and is converted to heat in the absorbing plastic,” he explains. “Both parts are pressed together and heat is conducted from the absorbing to the transparent plastic allowing both materials to melt and create a bond.” Moreover, an internal joining pressure is also generated through the thermal expansion of the laser-heated plastic parts, so that the combined internal and external joining pressures ensure strong welding of both parts. He adds that almost all thermoplastics and thermoplastic elastomers can be welded in this way, as well as glassfibre-reinforced plastic types.

The term ‘contour welding’, Rudolf explains, means that a laser spot is guided sequentially along a predetermined welding pattern, melting it locally. “The welding volume remains comparatively small as a result of the geometric conditions and extrusion of the melt is avoided,” he states. The importance of that – in an application requiring both stringent visual aesthetic quality and avoidance of any compromise to the transparency of the cover – is self-evident.

A further benefit is that the technique involves only a small laser spot size because of both the small size of the assembly being welded (197x23x17mm) and the fact that the laser-transparent component also acts as a light guide. The laser beam source in this instance, says Rudolf, is a 100W air-cooled collimated diode laser. The application is welded with a 40mm/s welding speed to weld the seam twice. The total welding time is approximately 20 seconds with production volumes now running at around 350,000 units per year.

Future developmentsSome clues to the future of plastics welding are provided by current research projects in which one of the participants is the Fraunhofer Institute for Laser Technology in Aachen, Germany. The FlexHyJoin project, which concludes at the end of this year, also involves Fiat and aims to investigate the potential for both induction heating and laser welding to join plastics-based material to metal in an automotive body.

The details are confirmed by Christoph Engelmann, team leader, polymer processing, at the Institute. He says the project is using as a test case a roof stiffener for a Fiat Panda made from glass-fibre-reinforced nylon. The project involves using a laser not just for welding but also for pre-treatment of the metal surface. “We are ablating the metal beforehand with the laser,” he confirms. After that the intention is to be able to try out and compare both induction and laser techniques for the actual joining of the component to the steel of the main vehicle body. 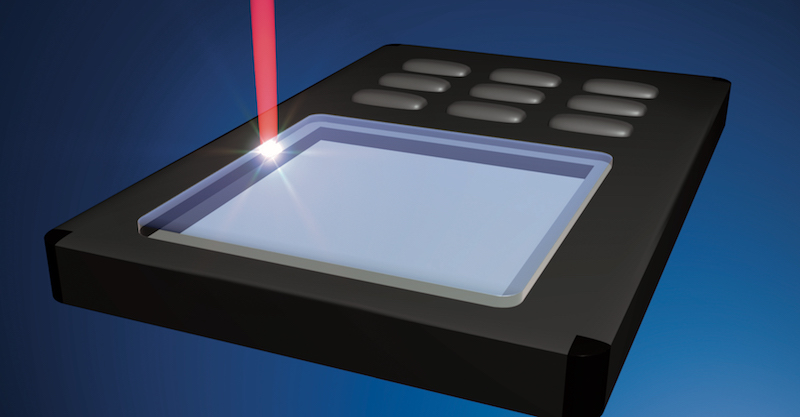 Englemann says the project has two major innovative aspects. The first will be that all the operations involved will take place in a fully automated robotic cell. The second is that part adhesion will be delivered by the welding alone with no supplementary use of any other material, such as adhesives or any form of mechanical fixing.

The cell itself was under construction at the beginning of this year in Austria and is due to be moved to Wilhelmsdorf, Germany at the end of March for installation at the site of lightweight automotive component-maker Gubesch Thermoforming. Engelmann says the intention is that over the course of the rest of the year, as many as a couple of hundred joining operations may be carried out in it. The cell itself will be exhibited at the MatX advanced materials conference taking place in Nuremberg in late June.

Meanwhile, a second project taking place over the same timescale, called ComMUnion, will also investigate hybrid joining techniques involving polymer-based and metal parts. Engelmann cannot provide any great detail on this initiative other than to say that, in direct contrast to its FlexHyJoin counterpart, it will specifically focus on applications in which a further reinforcing material will be used. Participants include Autotech Engineering, the R&D arm of Spanish automotive components supplier Gestamp, and the underlying objective is to enable the technique to be used where extra strength is required. An example, Englemann suggests, might involve a B-pillar. 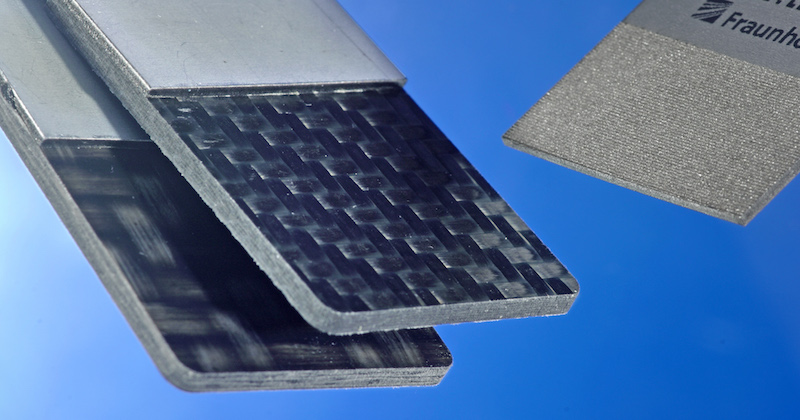