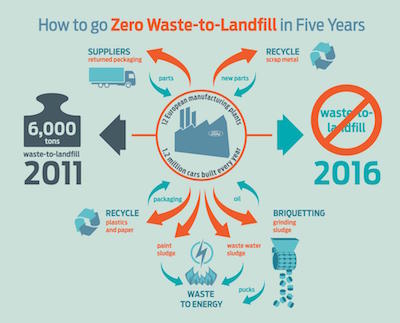 UK – The OEM says it has eliminated the 6,000 tonnes of waste per annum which were previously sent to landfill from manufacturing operations involved in the production of 1.2m vehicles. The target was achieved over a period of five years.

Ford employed innovative strategies to avoid creating waste, such as the briquetting of grinding sludge at its engine plant in Dagenham, UK, so that the oil can be re-used in production. At Valencia, Spain, the OEM has been generating alternative fuel from waste which could not be recycled. Valencia and Craiova, Romania, are the latest plants to attain landfill-free status, joining Dagenham and Bridgend, UK; Bordeaux, France; and Cologne and Saarlouis, Germany. In total, 12 Ford factories in Europe now recycle, reuse or repurpose all waste.

“This achievement is a fantastic base to push on from and further improve in areas such as water and electricity usage reductions as Ford of Europe drives towards the company’s global sustainability ambitions,” commented Andreas Reiss, manager, Environmental Quality Office Europe, Ford of Europe.

In 2015, the OEM’s European facilities adopted a new energy management operating system within the Ford Production System, enabling the remote control of plant energy and heating systems, therefore improving energy efficiency. The move was part of an energy strategy which has resulted in a 25% drop in energy use compared with 2011, saving 800GWh per year.