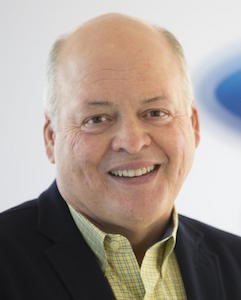 US – Replacing Mark Fields, who is retiring after 28 years with the company, Jim Hackett will become president and CEO, reporting to executive chairman Bill Ford. The OEM also named Jim Farley, Joe Hinrichs and Marcy Klevorn in new leadership roles under Hackett.

Hackett held senior positions outside the automotive industry before joining Ford Smart Mobility in March last year. In his new role, he will lead Ford’s worldwide activities and 202,000 employees.

According to the OEM, Hackett will have three priorities:

– improving operational execution to boost quality, go-to-market strategy and product launch, while tackling underperforming parts of the business;– modernising the company, using new techniques to innovate, speed up decision-making and improve efficiency. This will include big data, artificial intelligence, advanced robotics and 3D printing;– preparing for future challenges to ensure that the company has “the right culture, talent, strategic processes and nimbleness to succeed as society’s and consumer behaviour change over time”.Jim Farley, who has served as executive vice-president and president, Ford of Europe, Middle East and Africa since January 2015, will take the role of executive vice-president and president, Global Markets, overseeing the Americas, Europe, Middle East and Africa, and Asia-Pacific. He will also be responsible for Lincoln Motor Company and global Marketing Sales and Service. In addition, Farley will oversee the strategy and business model development for electrified and autonomous vehicles.

All appointments are effective from June 1. The company said that successors for Hinrichs, Farley and Klevorn will be announced at a later date.