Following the lead of their automotive customers, fastening technology specialists are responding to industry demands to find innovation in weight, strength and performance 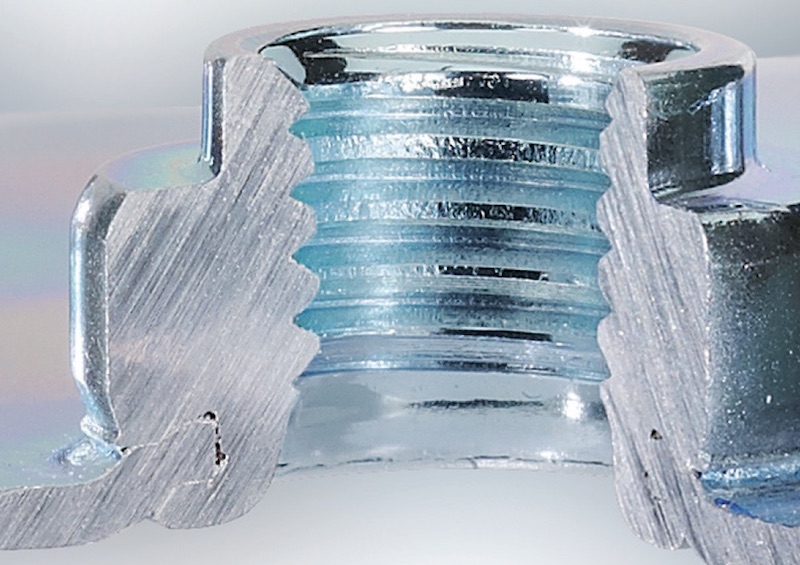 As OEMs develop lightweight construction and optimised materials, the challenge for fastening specialists is to provide solutions as small, light and adaptable ideas without compromising on strength. Profil’s new RND Light system was developed to provide car makers not only with a fastening solution but also a process that saves on both cost and weight. The RND Light rivet nut combines the excellent performance of a standard rivet nut with the cost advantage of a pierce nut through optimised material use and reduced installation space.

Due to the integration of ribs on the riveting portion, it is possible to reduce its diameter and to carry the outstanding performance of the RND standard nut over to the RND Light. As less material is used, the RND Light achieves the cost level of pierce nuts and smaller package space.

Integration of ribs on the riveting portion, makes it possible to reduce diameter and transmit outstanding performance of the RND standard nut to the RND Light

Also, compared to pierce nuts, the RND Light has a significantly higher load capacity under dynamic loads.In the development of RND Light, the static and dynamic properties were examined in a comprehensive series of tests. The RND Light was compared with standard rivet nuts, clinch nuts and weld nuts in different sheet thicknesses and sheet metals. Tests revealed that on torque values, ejection forces and the results from the dynamic shear, RND Light exceeded requirements.

OEM applicationsThe first serial applications for the new rivet system were implemented at BMW and the VW Group. At both companies, the rivet nut is the default connection element.

An essential component of the RND Light system is the associated processing equipment, such as sorting and conveyor equipment. Like other rivet nuts, they can be manually processed semi-automatically or fully automatically. In addition to standardised systems, Profil can provide customised solutions for use in the pressing plant.Of paramount importance is reliability and availability of equipment. When the nuts are introduced by large presses at high hourly rates, reliability plays a crucial role.

The most economical method during pressing of rivet nuts and other attached metallic fasteners is the automated processing in large and medium series. Here, the mechanical joining has the advantage of being able to integrate the operation inside the press tool. This results in a high process reliability and tight tolerances of the fasteners in the sheet metal part.With automatic processing in progressive dies or transfer dies, the fastening elements with feeding units are mechanically installed into the sheet-metal through the piercing process. On each ram stroke, one or more fasteners are secured in the sheet metal and are assembly-ready.

However, the integration of the joining technology in the pressing process is complex. Here, Profil has the advantage in that it can provide as a system supplier the service and the development and processing expertise in addition to the fastener and the required automation technology.

Servo pressesOEMs such as BMW, Daimler and Audi already process the RND standard rivet nuts in mechanical transfer presses, achieving an increase in press shop productivity and a reduction in storage of finished and semi-finished parts. The new light RND rivet nuts can also be applied on modern servo presses.

• The RND Light is an addition to the RND standard. It is offered from M6 to M12 with various properties

• Due to the wide range of material thicknesses for RND Light, this product can replace pierce nuts as standard components

Key trendsToday’s automotive industry uses a patchwork of different metal technologies and non-metal components adapted for a variety of applications.

The use of high-strength steel is increasing, sheet metal thickness has been reduced and the combination of metal and plastics is more commonplace. OEMs are endeavouring to optimise different types of material for the best weight/cost relationship and crash test outcomes.

Taking the door hinge as an example, vehicle designers are placing more functions into a fastener (centring, spacing, fixing, sealing functions etc). So while the prime function to fix one part to another is retained, the quantity of specialty fasteners adapted to the extra tasks is increasing.

Standard applicationsBMW, Ford, VW, Renault, Opel, FCA, in fact nearly all volume production and premium marques carry Profil fasteners. Profil deals in a variety of distinct fastenings, offering options to customers who often prefer to be viewed as partners, rather than merely suppliers.

In one example, used on the dash panel, Profil developed a special type of bolt that went on to become the basis for a new fastener family – a centring bolt for a Renault Megane sheet-metal part. Profil also developed a hinge reinforcement, as a special fastener, for the Renault Scenic as well as a dash panel for Ford and others applications.

In another example, the development centred on the insulation of engine noise in a new light truck. A key element in this case was the sheet-metal material for the dash panel between the engine area and passenger compartment. The OEM used laminated steel, 1.23mm thick. The self-piercing bolts installed in the dash panel were also installed in 1.5mm aluminium material used for the cowl. Installation was completely automated, enabling high production volumes.