Iran: Back on the road 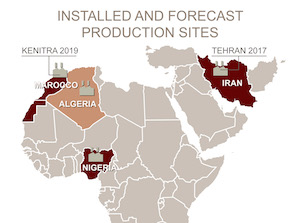 Within days of sanctions on Iran being lifted in January, PSA announced a major investment of over $430m in a new joint venture in the country that will see Peugeot 208s, 2008s and 301s being made alongside new Iran Khodro-branded models (themselves likely to include a fair amount of Peugeot technology). The Peugeot models will also be required to have 40% local content, suggesting that several PSA suppliers from France will follow their customer to the former pariah state. Renault too, was quick to confirm its own ambition to make around 500,000 units in Iran per year, through joint ventures with Iran Khodro and Saipa. Indeed, it might boost output still further, having already made around 500,000 vehicles in the country since 2003 despite the sanctions.

Analysts suggest that the Iranian market could reach 2m units a year or more by the early 2020s – comparable to UK or French sales. No wonder the French vehicle companies, which have deep roots in the country, were quick off the mark (and had no doubt been working behind the scenes for some time with their Iranian counterparts, so as to be ready when the sanctions were lifted). Additionally, Daimler has signalled an interest in the market, through its truck division and alongside Japanese affiliate, Fuso.

After years in the wilderness, Iran now wants to join the global economic system, with the attraction of potentially billions of euros or dollars in investment. Indeed, PSA and Renault will not be the last to establish manufacturing operations in this re-emerging market. Iran has always been a major political and military player in the region, but the country is now repositioning itself as a regional economic power.

Moreover, it will not only be the domestic Iranian market which the PSA and Renault JV factories, and later others, will serve. PSA has emphasised that Iran is one of its three core pillars along with Europe and China (suggesting that South America no longer holds the allure it once did) and that exports from the country are on the agenda. Political fences may need further mending for Iran to be able to export freely, but it is reasonable to imagine this sleeping giant emerging as a significant economic player in the region – and the automotive industry appears to be at the heart of the country’s economic plans and ambitions.

So who will be next, after the French, to enter Iran? In earlier times, one might have suggested Volkswagen, but the German OEM has other demands on its time. It may be too early for the American manufacturers to commit to the country, while for the European premium brands, Iran is insufficiently developed for now; and it is probable that the Japanese brands have enough on their hands elsewhere in Asia, especially China. Hyundai has always had some interests in the country and may well look seriously at Iran but it would not be surprising to see the next move being made by the Chinese, especially the ambitious Chery and Geely. These two have already grown internationally and – crucially – independently of alliances with US, European or Japanese partners. Iran could well be their next target.