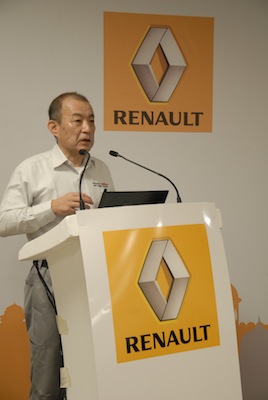 Toshihiko Sano has a unique role within the Renault-Nissan Alliance’s global manufacturing operations. As managing director of the Renault-Nissan Automotive India Private plant at Chennai, he is the only factory head in the group with responsibility for producing cars for both brands – or three, with the recent re-introduction of the Datsun nameplate.

The factory at Oragadam, 35km south of Chennai itself, now turns out 12 models with the start of production of the Datsun GO at the beginning of February. There are two main production lines, plus a smaller one to assemble CKD versions of the Renault Koleos and Fluence and the Nissan Teana. The facility also has its own powertrain manufacturing facility, and even builds a small number of Stile minivans for Ashok Leyland.

“It is very challenging to produce so many models on only two lines,” says Sano. The task is only possible because of the Alliance’s platform-sharing strategies, he adds. The main line, which opened in 2010, builds mid-sized vehicles: Renault’s Duster and Scala and Nissan’s Sunny, Evalia and Terrano. The second line, added in 2012, is for small vehicles: the Renault Pulse, Nissan Micra and, now, the Datsun GO.

Chennai lies at the heart of the automotive manufacturing region in south-eastern India. Daimler, Ford, BMW and Hyundai also have factories nearby, and there is a strong local motorcycle industry. Strategically, it is ideally placed. “We are only 35km from Chennai airport,” says Sano. “From the plant to our export port at Ennore [it] is only 80km. We now export to 101 countries.” Indian-made versions of the Duster are sent to the UK, South Africa and – as CKD packs – Indonesia. European versions of the Micra are made at Chennai, as is the Sunny for Africa.

Bringing it all together
There is a strong local supply base in the area, and other parts are brought in from Delhi, Mumbai, Pune and Bangalore, or imported through Chennai. There are 115 suppliers serving both brands, plus 77 exclusive to Nissan and 46 devoted to Renault. “At the moment 54% of our parts are sourced in India, but the ratio of local suppliers is increasing,” explains Sano. [sam_ad id=17 codes='true']Chennai was the first Renault-Nissan plant to adopt the latest Alliance Integrated Manufacturing System (AIMS) and Alliance Production Way (APW). These tap into best practices at other group plants for maximum efficiency while meeting the target of ‘frugal engineering’ for a low-cost market. “We benchmark process by process,” says Sano. “Valencia [Renault] and Sunderland [Nissan] are two we looked at, but we also got ideas from Dongfeng and Yokohama [both Nissan].”

But the need to control costs in a market where the bulk of sales are A- and B-segment cars priced at the equivalent of €3,500 ($4,800) means that Chennai has a low level of automation compared with other Alliance plants. “At the moment labour costs are very competitive, so we use labour rather than automate,” says Sano. “We can leverage the benefits of a low-cost country. We automate in areas where it will improve quality or for ease of working. But we have designed the plant so that in future, if it proves to be economically interesting to automate, we can do so. It is similar to what we have done at China and even Sunderland in the beginning.”

"Chennai is now a model plant within the Alliance" – Toshihiko Sano, Renault-Nissan

Currently, the highest level of automation is in the welding shop, but this is still only 14%. “We are considering more automation, and can go up to 85% if necessary,” explains Sano.

The labour-intensive production system places an onus on training a constant supply of new workers for the plant. Even in an area with a strong automotive industry, the local skills base is not yet well established. At Chennai, the preference is to take in school-leavers and train them in the monozukuri (‘making things’) and kaizen (‘constant improvement’) principles, rather than hiring people who have been ‘tainted’ by working practices at other factories.

Staff turnover is only 1% but more hands are now needed. The Chennai plant is undergoing a period of expansion; capacity was increased late last year from 400,000 cars per year to 480,000 to accommodate Datsun and a sixth, small Renault model based on the Alliance’s new Common Module Family (CMF-A) architecture. The current permanent workforce is 6,500, with an additional 1,200 contractors. The introduction of CMF-A will take total investment in Chennai close to $1.3 billion.

According to Sano, Chennai is going to start preparations for the first CMF-A cars – one for Renault and one for Nissan – after the May shutdown. “Modifying the lines for CMF-A will not be so difficult thanks to the AIMS production system,” he states. “It makes our processes more simple.”

Chennai has so far produced nearly 600,000 cars, more than half of which have been exported, and close to 400,000 powertrains. “This is a unique operation – a true Alliance plant,” says Sano. “We started [looking] here in 1999; it was a greenfield site. Its advantages are that it is close to the sea, has the support of the local government, which has been aggressive about inviting OEMs, and offers a good cost comparison with other regions."

He gives the final word on Chennai: "It is now a model plant within the Alliance."