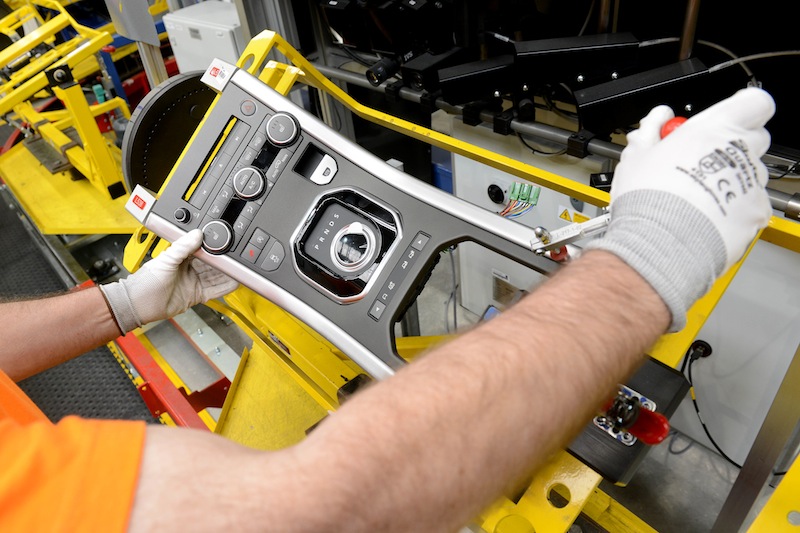 International Automotive Components’ (IAC) operations in Halewood, UK, make various interior elements for the Jaguar Land Rover Discovery Sport and Evoque. According to Trevor Warner, general plant manager, these parts are delivered on a just-in-time (JIT) and just-in-sequence (JIS) basis to the nearby JLR plant. They include headliners for the Evoque and centre consoles for both vehicles, the products which have recently been moved to the tier supplier’s new 72,500 sq.ft facility, referred to as Halewood 2. The Halewood 1 facility is focusing on cockpits and leather wrapping.

The JIT and JIS requirements necessitate a high degree of integration between IAC and JLR. Warner says that operations on interior assemblies for any particular vehicle start when a signal is received that the relevant body has set off down JLR’s production line. At most, he says, IAC will get four hours’ advance notice of the product configuration it has to assemble and deliver, though it can be much less. The typical time is just 30 minutes. Delivery time is extra, but two trucks shuttle constantly between Halewood 1 and the JLR plant, while one truck does the same for Halewood 2.

Most assembly procedures are essentially manual with the aid of handheld DC power tooling. Pneumatic tooling, Warner reports, has been eliminated across both Halewood sites with the sole exception of fastening cockpit assemblies to the rack on which they are delivered to JLR. Even this application is one he is keen to abolish as soon as possible.

The leather-wrapping operation for elements of the Evoque interiors involves robotised procedures such as flame treatment of moulded sub-structures, plus highly skilled manual operations; Warner describes these personnel as craftsmen rather than just assembly workers.

Forklift trucks are no longer used in assembly areas, only being employed to unload delivery vehicles and transport components to the warehousing area adjacent to the assembly hall. Components are delivered to the lines by tow-truck. In accordance with the company’s aim to operate consistently at a global level, forklifts and people are strictly segregated, confirms Warner.

Operations at Halewood are supported by around 100 external suppliers, which in 2014 provided roughly 1,000 component numbers (not including colour variations). Though the quantity of suppliers remains fairly constant, Warner says part numbers tend inexorably to rise and that probably another couple of hundred would have been added by the end of 2015.

In some cases, the configuration of the parts is updated on a regular basis because interior elements frequently have to be remodelled to cope with the introduction of new electronic systems, explains Warner. IAC’s operations are therefore driven by a need to respond to changes in consumer preferences.

All this means that IAC has to be not just an assembly operation but also a product developer. Around one-fifth of the company’s sites are design and technical centres rather than manufacturing locations. Halewood 2 will be both. An area to one side of it – still just a bare shell at the official opening – will be devoted to prototype operations.

A second new IAC facility at Elmdon, in Birmingham, is also strategically located near JLR sites; the engineering centres at Whitley and Gaydon, plus the Solihull plant. With 135,000 sq.ft of floorspace, it covers nearly twice the area of Halewood 2 and will house customer service and programme management teams, as well as engineering and manufacturing operations. The site delivers instrument panel trim to IAC Halewood as well as hard trim for the current Land Rover and Range Rover model line-up.

Expanding operationsAccording to the company’s president and CEO, Robert ‘Steve’ Miller, IAC has been expanding its operations over the past couple of years at a rate of effectively one new facility every two months. “Our global footprint has increased by more than a dozen new locations around the world over the past 24 months,” he confirms. There are no indications that over the next 12-24 months this rate of expansion will decrease.

Indeed, IAC represents one of the major success stories of the automotive manufacturing industry over the last decade. When the company was formed in 2006 from the former global interiors divisions of Lear and Collins & Aikman, it had sales of $614m, 11 facilities in seven countries and 3,000 employees. By 2014, the corresponding figures were $5.9 billion, 103 locations in 22 countries – including 83 manufacturing sites in 20 countries – and 32,000 employees.

The company focuses primarily on vehicle interior systems. In Europe, for instance, 43% of its output involves instrument panels, consoles and cockpits. Other major portions of its output include: flooring and acoustic systems (17%); door and trim systems (14%); and headliner and overhead systems (10%).

Interiors as market differentiatorsThe company’s growth on the back of such products was no surprise to Miller, who came on board in the middle of 2015. He says he recognised some time ago that as vehicle exteriors became increasingly homogenised to increase theiraerodynamic efficiency, so vehicle interiors would become more influential as market differentiators.

Miller notes that it is an area in which “technology and innovation are increasingly resting with the supply base – we are the ones who can see what is happening”. He adds: “The consequence is that it is better business for us to be involved in the development of the product as well as actually making it. We have the capability.”

We are seeing a consolidation of the interiors business into a smaller number of larger, globally competent suppliers making products that are increasingly market differentiators – Robert Miller, IAC

The new Halewood facility is dedicated to serving JLR’s plant, however Miller points out that the partnership has much broader ambitions. “JLR wants us to be with them globally,” he states. “We think that is the right business relationship for an automotive customer and supplier.” He explains that this type of working relationship helps to deliver consistency in manufacturing procedures and associated quality on a global basis. 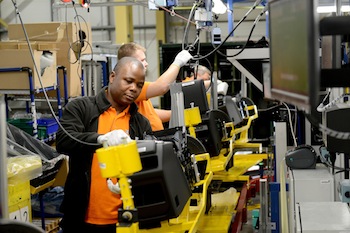 At an industry level, the logical corollary is a reorganisation of the automotive components supply business worldwide into a smaller number of companies with global operations. Miller suggests that this trend is evident in the manufacture of vehicle interiors and that the pace of IAC’s recent development exemplifies it. “We are seeing a consolidation of the interiors business into a smaller number of larger, globally competent suppliers making products that are increasingly market differentiators,” he confirms.

But that trend is, of course, driven by the OEMs rather than the suppliers, and Miller concedes that it is not yet universal. “Not every auto-maker thinks that way,” he explains. “There are still some out there which seek to procure components based on the best deal they can get wherever they have an assembly plant”.

By contrast, JLR is a company which very much shares Miller’s thinking. In the case of Halewood, this policy of collaboration and co-location did not require the company to go more than a few hundred yards, but IAC’s message to the vehicle maker is: “wherever you go, we go”.