Unharmed by the economic downturn, manufacturers of motorcycles and scooters are now pressing ahead with plans to increase production – building new plants and expanding existing facilities 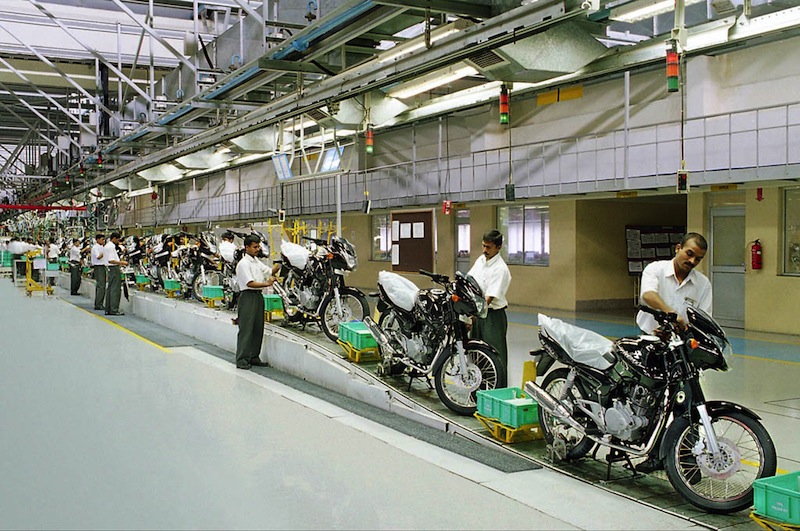 The biggest motorcycle and scooter market in the world is back at full throttle after surviving India’s economic slump of the last couple of years largely unscathed. While sales of cars and commercial vehicles (CVs) declined in the country, powered two-wheelers saw modest growth of 2.3% in financial year 2012-13. There was no disaster, although makers paused in their plans to add yet more manufacturing capacity.

But now sales are picking up again. In the 12 months to the end of March 2014, demand for two-wheel transportation climbed 7% to 16.9m, and in the first half of this financial year growth more than doubled to 16%, to record sales of 8.17m, according to the Society of Indian Automobile Manufacturers (SIAM). That figure represents nearly one-fifth of the world’s total motorcycle, scooter and e-bike sales.

Volumes will continue to grow, according to automotive supplier Bosch. The company’s chairman, Volkmar Denner, stated in October this year that he expects the two-wheeler market in India to reach 27m units by 2020. That optimism is putting investment back on the agenda among motorcycle manufacturers. India’s undisputed sales leader, Hero Motor Corp, which took 44% of the market in the 2013-14 financial year, has just opened its fourth manufacturing plant in Neemrana, Rajasthan, with an annual capacity of 750,000 units. The company has also started work on a fifth plant at Halol, in the coastal western of state Gujurat, with a capacity of 1.8m. A sixth plant is planned for Andhra Pradesh state on India’s east coast, the company announced in October.

Hero boasts that it is the world’s largest two-wheeler manufacturer in terms of production capacity, with the ability to make 7.65m units a year – and that was before its Neemrana plant went on stream. The company stated in its annual report that it plans to increase capacity to an incredible 12m by 2020.

Japanese rivals improving their grip
Hero is not the only OEM that is expanding. India’s second-largest maker, Honda, recently laid the foundation stone for its fourth plant in India. Like Hero’s latest factory, this new plant also eschews the hub of two-wheeler manufacturing around the capital, New Delhi, for investment-friendly Gujurat. The plant is scheduled to start production in December 2015 and will have an annual capacity of 1.2m units. This will give the Japanese maker installed capacity of 5.8m units.

India is so important for Honda that the manufacturer, which only split from its joint venture with Hero in 2011, estimates that it will contribute almost a quarter of the company’s total two-wheeler sales in the 2014-15 fiscal year, according to a statement this October by Noriaki Abe, chief operating officer for Honda in Asia and Oceania Region. Its predicted sales for the period amount to 18.2m.

Honda’s global rival, Yamaha, sells nowhere near the same number of two-wheelers in India. However, after the establishment of its second plant in the country was delayed by the downturn, construction work started in 2013 and the facility is poised to open. The plant is situated in Chennai, on the east coast, and has a capacity of 1.8 units per year. Yamaha sold only 46,000 units in India during 2013 but stated in its annual report that it expects to sell 220,000 by 2017, and that by 2018 it will have the ability to build 2.8m after increasing capacity at its plant in Surajpur, Uttar Pradesh. Exports are predicted to make up the difference.

Suzuki is the other Japanese motorcycle-maker eyeing up India. At present, it has a capacity of 540,000 units at its Guragaon plant in Harayana, not far from where it builds its market-dominating cars with local maker Maruti. Of the other players, local maker Bajaj said in its 2013-14 annual report that it wants to boost capacity from its current 5.76m units per annum to around 6m by March 2015. Bajaj is the third-biggest seller in the country, though it suffered a fall in sales in the first half of this financial year, dropping below 1m to 953,000.

Scooting ahead with sales
Of the two-wheeler OEMs that are expanding, those which have got to grips with the fast-growing scooter market are doing best. Scooters have been popular in India ever since Piaggio licensed its Vespa to Bajaj in the 1960s (copies are still being made by LML at its factory in Kanpur, Uttar Pradesh), but it is only recently that sales have really taken off, growing 22% in the last financial year to 3.75m units. That rise has continued this year, with 2.19m sold in the six months from April to September – an increase of 32%, according to SIAM figures.

“We are confident that Yamaha’s efforts in India will lead directly to sales growth in Africa as well” – Hiroyuki Suzuki, India YamahaTwo factors are pushing up sales, Chanchal Chauhan, special correspondent for The Economic Times, told AMS: increased urbanisation and the rising number of female riders. “The scooter is more flexible and dependable than a motorcycle in towns and cities,” he explained. He said that motorcycles are now predominantly bought in rural areas, with Hero’s budget Splendor machine alone taking a massive 20% of the two-wheeler market.

Abe at Honda predicts that the scooter sector will hit 35% of the two-wheeler market in the next five to ten years, up from around 25% now. The company is one of the biggest sellers of scooters, and its forthcoming plant in Vithalapur, Gujurat, will produce only scooters. An annual capacity of 1.2m units will make it the largest scooter plant in the world, Honda says.

Italy’s Piaggio is another company making scooters for India that are pitched at more ‘premium’ customers, while industrial giant Mahindra and Mahindra also seems to be on the hunt for wealthier buyers, announcing in October the purchase of a controlling 51% stake in France’s Peugeot Scooters. The Times of India reports that the company’s spin-off, Mahindra Two Wheelers, so far has not fared well in its attempts to take on established players, selling just 10,787 units between April and August this year. The company has not said whether it plans to make Peugeot scooters in India, but this looks inevitable in the long term, given the potential savings in production.

Targeting richer riders for premium profits
The strategy to focus on wealthier customers is one that is being repeated in the motorcycle market. In its company report, Hero estimated that the premium market in the last financial year accounted for 16% of sales at 1.6m, up 7% on the previous year.

The vast majority of motorcycles sold in India are only up to 200cc in engine size, but earlier this year Honda said it is planning to make the CBR650 sports bike in the country from 2015 “to showcase Honda India’s manufacturing quality to the world”, according to Honda India’s vice-president, YS Guleria.

Also making high-end machines is Bajaj, which took a 47% stake in premium Austrian motorcycle-maker KTM. Bajaj already builds the KTM 200 for the Indian market at its plant in Chakan, Pune, and in the past year has added the bigger KTM RC390, which will be exported as well as sold locally. Bajaj told automotive website Overdrive that the production of the bikes is 98% localised. 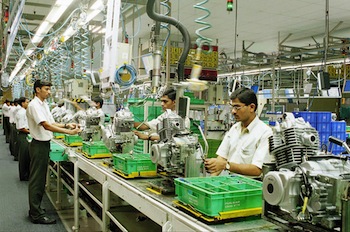 The growing lifestyle market is also fuelling venerable local bike-maker Royal Enfield. Its enduring, British-rooted machines of up to 500cc in size have come full circle to appeal to those buyers wanting a more ‘retro’ look. The company is generating handsome profits for owners Eicher Motors, with sales jumping by 57% to 178,000 units in the last financial year. In the second quarter this year, the company boasted that it had improved its EBIT operating margins to 23.5%.

In addition, plans announced earlier in 2014 will see an increase in production to 280,000 units at the company’s plant in Oragadam, Chennai, starting this year and with the aim of boosting capacity to half a million by the end of 2015. Production will cater to both India and export markets such as the UK.

Looking back for the future
Royal Enfield’s recipe for financial success – exploiting older designs – is being replicated on a much larger scale at companies like Bajaj and Hero. “Manufacturers of two wheelers have the best margins. They have scale, they have volume, but they do not have to have the best technology,” commented Chauhan at The Economic Times.

This situation is helped by the fact that, unlike car and CV manufacturers, bike-makers are not pushed toward new designs by emissions regulations. “Cars and bigger vehicles follow the Euro cycle on emissions, but Indian two wheelers don’t conform to anywhere else,” Chauhan said. Domestic regulations, he explained, are so soft that electronic fuel injection is not required until 2020, meaning that makers can continue with cheap carburetor fuelling.

Consequently, Hero, as one example, spent just 0.49% of its total revenue on R&D, according to its 2013-14 company report. Bajaj spent 1.49% of its sales revenue over the same period. By contrast, global carmakers typically spend 4-8% of their revenue on R&D. As a result, motorcycle-makers can both keep prices low and make enviable profit margins. Bajaj actually claimed its EBITBA operating margin of 20% for the six months from April to September this year as “the highest in the auto industry”, beating the likes of Porsche and Ferrari.

To be fair to the Indian motorcycle industry, emissions regulations for two-wheelers are hardly stringent in Europe, either (meanwhile, in China, pollution from petrol-powered motorcycles and scooters has seen them banned in many cities, helping electric alternatives).

Perhaps mindful of the future, though, Hero has in the past year set up a joint venture with Italian supplier Magneti Marelli “to develop next-gen, two-wheeler fuelling systems”, stated its annual report. Hero will hold 60% of the company and invest $27m. 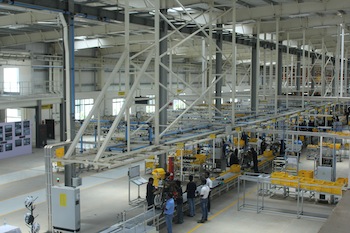 A trend in India for 'retro' motorcycles has increased sales at Royal Enfield. The company aims to produce 500,000 by 2015
Despite the vast size of the domestic market, Indian two-wheeler manufacturers are increasingly looking at exporting their product to other countries. Total exports for the 2014 financial year from India were 1.98m units, up from 1.1m in 2010, according to SIAM figures.

Bajaj took the lion’s share, achieving 1.32m, or 67%. The bulk of the exports (46%) went to Africa, while South Asia, the Middle East and Latin America were other big regions for the company. Hero plans to build its exports from 131,000 in 2013-14 to 250,000 by the end of this financial year, targeting predominantly emerging economies. The company has recently set up manufacturing plants making motorcycles from kits in Bangladesh and Colombia.

Meanwhile, Yamaha is targeting exports amounting to 30% of the company’s planned capacity of 12.8m by 2018, again looking at emerging markets. “We are confident that Yamaha’s efforts in India will lead directly to sales growth in Africa as well,” said managing director of India Yamaha, Hiroyuki Suzuki, earlier this year.

India remains the undisputed global production hub of cut-price two wheelers. With the promise of increasing export earnings and the continuing need to provide low-cost personal travel in a country still blighted by poor infrastructure, further growth in production and sales seems a certainty.