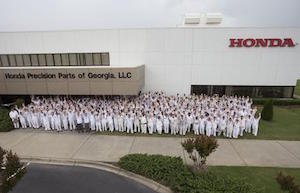 US – The investment will be spread across two plants in Georgia and Ohio, enabling Honda to produce the automatic transmissions for front-wheel-drive vehicles. Production started today at Honda Precision Parts of Georgia (HPPG) in Tallapoosa.

At HPPG, the OEM is spending $100m for a new assembly line and production modifications, while $49m will go towards extra equipment and increased capacity at Honda Transmission Manufacturing of America (HTM) in Russells Point, Ohio.

The ten-speed automatic transmission (10AT) was developed by Honda R&D for Honda and Acura vehicles. It will first be fitted to upper grades of the 2018 Honda Odyssey minivan which is launching this spring, then applied to other light trucks and cars in future.

HPPG was established in 2006 and now produces more than 375,000 transmissions for Honda and Acura models every year. HTM, which opened ten years earlier, makes over 1m transmissions per year for the two brands. The latest investment adds to the $3 billion that Honda has already spent on its US plants over the past four years.www.honda.com