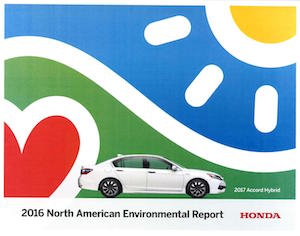 US – The 2016 North American Environmental Report (NAER), Honda’s 12th such publication, states that the CO2 emissions intensity of its vehicle production dropped by 10% compared with the previous year despite a record output. In fiscal year 2016, energy per vehicle also decreased by 6.7%, the most energy-efficient level in ten years. Waste to landfill was reduced by 83% after the resolution of start-up issues at Honda Celaya, Mexico.

“From an environmental perspective, we are aggressively pursuing innovations that will help reduce CO2 emissions, which is society’s most pressing environmental challenge,” said Toshiaki Mikoshiba, president and CEO, Honda North America. “We are pursuing environmental innovation across all aspects of our business with a strong focus on improving efficiency at every stage of the product lifecycle.” Honda aims to halve the CO2 emissions from its products and operations worldwide by 2050, compared with 2000 levels.

As well as improving its own manufacturing processes, Honda has been working closely with suppliers to minimise environmental impact. Last year, the OEM collected data on almost 95% of new-vehicle parts purchases in an effort to monitor and reduce CO2 emissions within its supply chain. Honda and its Acura brand also receive data from suppliers to tackle changing hazardous materials regulations. Attempts to reduce or eliminate the use of such substances meant that 11 out of 15 Honda and Acura models sold in the US and Canada in 2016 had interiors that were free from polyvinyl chloride.