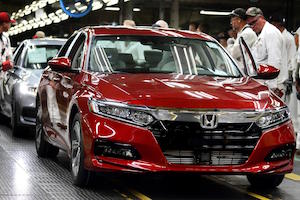 US - It was the first Japanese OEM to make cars in the US when production began at the Marysville Auto Plant in Ohio back in 1982. Since then, Honda has established four other plants across the country, and has recently recorded its best ever annual sales figure at 1,641,429 units sold in 2017.

It has also just passed the milestone of making its 25 millionth car in the US. According to Tom Shoupe, executive Vice President and chief operating officer, Honda of America Manufacturing, the production figure is a reflection of the company's dedication to serving its US customers: "This achievement truly represents 25 million customers who put their faith in the Honda brand and we will continue to honor this relationship with a focus on achieving the highest levels of quality and innovation in the next 25 million vehicles."

In October 2017, the OEM announced that it had produced 25m units at its Anna Engine Plant in Ohio. The news came soon after Honda said it was investing US$267m and adding 300 jobs to support production of the new Accord in the region.

US$165m of this was spent on a new weld department featuring 342 specialist welding robots for the Marysville Auto Plant, while the rest was used to upgrade the Anna Engine Plant. To date, Honda has spent around US$4.9 billion on the Marysville Auto Plant, which has an annual capacity of 440,000 units, and US$2.5 billion on its Anna Engine Plant, which can churn out 1.18m engines every year.