Honda invests in Indiana and Ohio 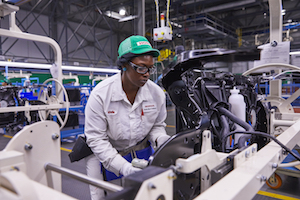 US - The OEM is spending US$61.5m to ready its Indiana and Ohio plants for the production of electrified vehicles. This follows after the company outlined its goal of ensuring two-thirds of its total vehicle sales would be electrified by 2030.

At the same time as announcing the investment in the two plants, Honda revealed that production of its all-new 2019 Insight has begun at its Indiana plant, which is situated about an hour south east of Indianapolis. The hybrid vehicle made its global debut at the 2018 New York International Auto Show.

"The new Honda Insight exemplifies our growing investment in the production of electrified vehicles in America and our associates in Indiana are proud to play a key role in this initiative," commented Isao Matsuzaki, president of Honda Manufacturing of Indiana. "As the lead plant for Insight production globally, we are committed to delivering the quality and reliability that our customers expect."

A new building spanning across 19,200 sq.m was constructed at the Indiana plant to accommodate in-house assembly of the Insight's front-end module. The Honda Transmission Manufacturing of America (HTM) plant in Russells Point, Ohio, received an investment of $29m to make the twin electric motor unit for the Insight, while its 1.5-litre Atkinson-cycle gasoline engine is produced at the company's engine plant in Anna, Ohio.

The Insight is now being assembled on the same production lines as the Civic and CR-V at the Indiana plant. According to Honda, this demonstrates the company's flexibility to manufacture multiple vehicle variants depending on demand.