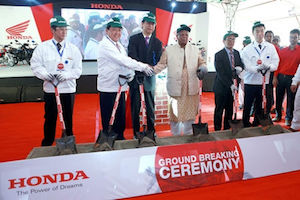 “We believe the Bangladesh motorcycle market is very promising, with great potential to grow supported by the large population and the economy with steady growth,” commented Shinji Aoyama, Honda’s chief officer for regional operations (Asia and Oceania). “In conjunction with the government’s policy to enhance the industry through the localisation increase, we have decided to make further investment to enforce our production with our new plant.”

The factory is due to begin producing motorcycles in H2 2018, with capacity for 100,000 per year. BHL plans further investment to double this figure by 2021, in line with the market trend. The company also aims to increase the local content. Honda stated that this will “contribute to the development of the Bangladeshi motorcycle industry in various aspects, such as: additional employment, the development of related industries and suppliers, and transfer of technologies, expertise and manufacturing know-how based on Honda’s global experiences”.

The OEM said that the market is now growing rapidly, after the government revised its localisation policy and reduced the supplemental duty this year, leading to lower motorcycle prices. According to Honda, industry-wide sales had reached 270,000 by September and the expansion is due to continue.

Established in December 2012, BHL is 70% owned by Honda while the remaining share is held by Bangladesh Steel and Engineering Corporation. The company started assembling Honda motorcycles in October 2013, at a leased facility in Gazipur which covers 8,700 sq.m and has the capacity for 80,000 units per year. The model line-up comprises: the CD80, Dream Neo 110, LIVO 110, CB Shine125 and CB Trigger 150. The Wave a and CBR150R are imported.