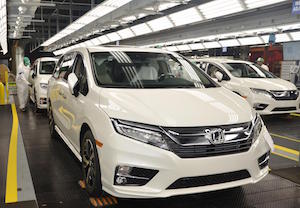 US – The production launch comes after “significant investments in new technologies”, says Honda, including a new process for the application of acoustic foam at 14 points throughout the vehicle body. The Lincoln, Alabama, factory is the exclusive manufacturing location for the minivan.

The 2018 Odyssey is the fourth generation to be built at Honda Manufacturing Alabama (HMA), and the second to be designed and developed in the US. Upper grades of the vehicle combine an i-VTEC V6 engine with a new, ten-speed automatic transmission produced at Honda Precision Parts Georgia, at Tallapoosa.

Since beginning production of the second-generation Odyssey in 2001, HMA has made 4m vehicles and engines, and the latest vehicle is the fourth new model to roll off the lines in the past five years.

HMA is the exclusive production location not only for the Odyssey but the Pilot SUV and Ridgeline pick-up truck; it also builds the Acura MDX SUV, plus the V-6 engines powering these vehicles. The workforce is currently around 1,500 strong.