Press shop productivity is typically controlled by upstream design decisions, from both a product and process perspective. Therefore, close co-operation between car stylists, bodyin-white engineers and press shop engineers is critical. Here, a number of measures dictate success. Designers must minimize the number of stamped parts, together with the number of press operations per part, in order to reduce the potential for dimensional, geometrical or surface errors. Next, there is the issue of automation – the material handling function should be automated to as deep a level as possible, in is as much to improve quality as to boost productivity.

With synchronized and automated manufacturing, perfect logistics managed by an all-encompassing control system, the car plant of the future could be expected to run like a well-oiled machine. The latest example of this is a new press shop at Shanghai General Motors in Shenyang, China, where production of stamped parts for two car models is due to start by mid-2012. 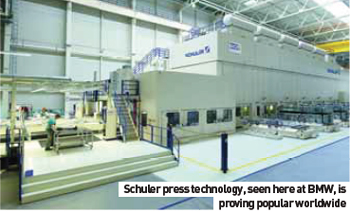 For this new facility, project partner Schuler will be installing two new press lines for the manufacture of around 40 different body panel parts. The two identical press lines will feature a draw press with 20,000 kN of force and three follow-on presses, each with 10,000 kN of force. Both lines will be equipped with transfer systems which can move even large body panels between presses, as well as handling part discharge, part repositioning and part placement into the subsequent forming station.

The lines can guarantee a permanent output of around 14 parts – or 28 two-out parts – per minute. At the same time, both press lines can be quickly and flexibly set up for different parts several times per shift. Following a fullyautomated die change it takes less than three minutes for the lines to restart.

The combination of low weight and high strength has resulted in increasingly frequent use of press-hardened parts in the automotive industry, or so says a specialist in this technology area, AP&T. The company has delivered more than 30 such installations, more turnkey production lines than any other supplier. Furthermore, since 2008, AP&T has organized seminars in 11 locations across the globe, including Detroit, Shanghai, Tokyo and Paris, each designed to heighten awareness of such technologies.

“Dialogue with customers is important for both parties, as well as a strong driving force behind our product development,” says Per Josefsson, Global Sales and Service Manager at AP&T.

Among other things, there is a new furnace concept, Feeder Furnace, which AP&T is developing together with Schwartz, a furnace supplier. According to the company, these heat up more quickly, use less energy and are more accessible and space efficient than conventional furnaces. Tool development has also been rapid at AP&T; the fourth generation is now in place. Better tools help improve cooling, increase part quality and reduce processing times.

Schuler is also installing three major new stamping lines at Ford facilities in Brazil and Mexico to support the company’s efforts to standardise production operations throughout the Americas. The new stamping lines will produce large car body panels, including side panel frames. Schuler recently completed the installation of a stamping-press line at a Ford facility in Cuautitlan, Mexico, and will complete two similar lines at Ford plants in Camaçari and São Bernardo, Brazil, later this year.

Schuler’s new generation of crossbar feeders will transport parts within the press lines. Together with blank-loaders located at the beginning of the lines and end-of-line automation for unloading parts, the press lines feature output capabilities of 15 strokes per minute. If the lines use dies which can form four parts per stroke, maximum production will reach 60 parts per minute. Here, Schuler uses digital simulation to pre-check all aspects of the process, including part transport and tool and die engineering capabilities. Whether a line can achieve its performance specifications and maintain consistent part quality ultimately depends on many factors, including construction of the press dies. Digital process simulation enables the end user to adapt die designs to a desired number of strokes as well as avoid restrictions for fast part transfers.

Ever greater speed is an age-old quest for auto OEMs and, according to Klaus Rothenhagen, Vice President International Sales at press supplier Aida, Honda has installed the world fastest servo tandem line with a maximum rate of 18 strokes per minute at a facility in Japan.

Similar lines will follow for the US and China. “The press line is equipped with a fully automatic de-stacker to load the blanks into the press line,” he says. “The line consists of four Aida servo presses; the first press has a press force of 23,000 kN. Aida’s crossbar transfer system transports the panel from press to press including a fully-programmable part orientation.” 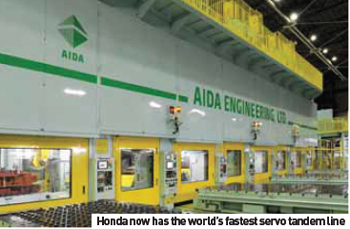 Rothenhagen also says that Aida has recently installed two Aida transfer presses at a Cosma International (an operating unit of Magna International) in St Petersburg, Russia, both of which can run at a maximum speed of 30 strokes per minute. Elsewhere, Rothenhagen claims that Aida has installed the world’s largest servo transfer press in Kamtek, Alabama, for producing high tensile steel body parts. The huge press has a capacity of 30,000 kN and can run up to 32 strokes per minute in the so-called ‘pendulum’ mode.

Arguably the biggest talking point in press shop technology right now is material, covering the potential shift to carbon fibre composites. In fact, some OEMs are already investing in composite materials for future ranges of EV city cars, but there are still a few hurdles to overcome before mainstream markets can be tackled.

While developers of EV city cars are planning to use lightweight carbon and aluminium structures to offset the weight of the battery, the drawback is cost. However, a steel body and a very large battery is a very different proposition – range and performance would be very limited. Another drawback to these future city cars are the inevitable repairs. As a result, the market could still see composite-bodied vehicles fitted with sacrificial aluminium crash structures.

Among the OEMs already committing to composites is BMW for its 2013 MegaCity electric vehicle, while Daimler has also announced plans to introduce the materials in Mercedes vehicles by 2013 – the company has a development agreement with Japan’s Toray Industries.

So what is the potential impact on press shop technology? In the end, it may not be as great as first feared. After all, Schuler has been offering presses for processing fibrereinforced plastics since 1998, used for producing roofs for sports cars, for example.

The pre-formed part made from CFRP matting is inserted into the lower die. After the production cycle has been started, the press pushes down the upper die and encloses the part in a hermetically sealed space. As the pre-formed shape fits the die exactly, the part is not formed further at this stage. A liquid resin system is then injected into the vacuum between the press dies. From this moment onward, the press force guarantees that the part remains hermetically sealed – despite the high pressure – and that the die halves cannot open. This stage lasts several minutes, during which time the resin is hardened by heating it to 100°C. After this stage, the part is almost fully formed and can be removed from the die. Following the press cycle, just a few more steps are required before the finished part can be sprayed.

Another press supplier following developments in the area of composite car panels is Neff-Pressen. “We are very aware of carbon-fibre composites and their future potential,” says the company’s General Manager, Oliver Dörmann. “As a result this topic is on our development agenda and we are working hard on providing a solution.”

Neff-Pressen has an ongoing programme of product development that builds on its current success in the automotive market, which today accounts for 60% of business. “We have a good position in market, particularly with Tier one automotive suppliers,” says Dörmann. “For instance, we have recently taken a significant order for three press lines from Magna International. This year we will ship one line to the USA (at the end of July) and another to Germany, with the final line supplied to the USA in 2012.”

To increase performance while handling sheet metal parts, such as in the pressing plant or as part of body shell work for automobiles, vacuum technology specialist Schmalz has continued to develop the high-powered X-Pump (SXP/SXMP) vacuum ejectors and equip them with additional functions.

Increased suction power combined with an integrated blow-off system now enable even faster handling cycles which leads to an increase in material throughput per unit of time.

The integrated IO-Link technology is another new feature that allows the entire vacuum handling process to be mapped electronically, controlled and monitored from a higher level control station: handling cycles, valve activities, evacuation times and control cycles. This allows early recognition of subtle changes and process errors. If condition monitoring notifies the user, he or she can then initiate preventative maintenance. Servicing measures can be planned accordingly and costly machine downtime can be reduced.

Flexibility in production and process

Dörmann says that securing orders such as these is a long and difficult process that hinges on company know-how, particularly when it comes to technologies such as hot forming. Here, hot forming tools are used to pressure harden the panels, or in other words, material is formed by the press while hot and then hardened by the cooled tool. This reduces the metal thickness while improving its strength by up to 1,800Mpa. There are a number of differentiators with this technology, many of which are recent or new introductions from Neff- Pressen, such as high-dynamic speed control, the ability to cold form as well as hot form for maximum process flexibility, and the most recent of all – a closed air system. This method negates the problem of dirty air when working with hot plates, and the difficulties this can create for the hydraulics in conventional systems.

“We are a small-to-medium sized company and so we do not have the long development cycles of larger competitors. As a result we can react more quickly to market demands,” says Dörmann. “Furthermore, we do not manufacture anything ourselves – we have a sister company that we use to manufacture important steel products such as frames, rams and tables, but everything else is purchased. This means we have no production problems regarding continuity of supply.”

This is a particularly salient point in a market currently driven by short delivery times, a fact with which a number of Tier 1 body-in-white suppliers will no doubt concur. Among their number is Stadco, the UK’s largest independent supplier of automotive body-in-white products and services, which has seen a shift in the way it serves customers in recent years.

“In the past, customers tended to put in dedicated production cells with captive tooling only making one product,” says Paul Meeson, the company’s advanced engineering director. “The smarter way is to have semiflexible cells, delivering multiple products in the same cell with captive tooling. Or the really clever way is to have no captive tooling, so you have a cell and keep bringing parts to and from it for different products. However, this is more suitable for lower volume vehicles. We tend to operate the latter two models where we can.”

An example of Stadco’s efforts can be seen at Ford’s Saarlouis plant in Germany, where a flexible cell is making body side rear quarter panels for various models.

The press shop is becoming an increasingly important part of car plants as body tolerances reach ever tighter levels in pursuit of improved panel fit, stiffer chassis assemblies and fewer squeaks and rattles. Underpinning gains in all these areas is the latest press technology, providing competitive gain for those prepared to invest.