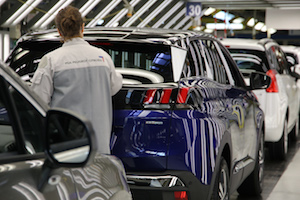 France - The OEM has said that it will bolster the output of its SUVs due to growing demand for several different models. It plans to start making the Peugeot 5008 at its plant in Sochaux once production in Rennes reaches full capacity. Following this, if capacity tops out in both plants in France, it will then start to assemble the Opel Grandland X in Eisenach, Germany.

"These vehicle allocations demonstrate that economic performance plays a key role in ensuring high capacity utilisation over the long term," explained Yann Vincent, executive vice president, manufacturing & supply chain at Groupe PSA. "Our agile production base, which has been broadened by the Opel acquisition, is enabling us to meet growing customer demand for SUVs."

The announcement was made soon after Groupe PSA recorded a sharp rise in revenue during 2017 as well as growth in its share of the European SUV market to 16.9% at the beginning of 2018. In terms of the company's total sales, SUVs accounted for 23% in 2017, with the Peugeot, Citroen, DS and Opel brands all seeing strong demand.

Amid uncertainty surrounding the impact of Brexit on the automotive industry, the future of several plants located in the UK has come under question. However, Groupe PSA recently announced an investment in its Luton facility ahead of the launch of the Opel/Vauxhall Vivaro. It also outlined plans to expand its engine and electric motor output in Europe.