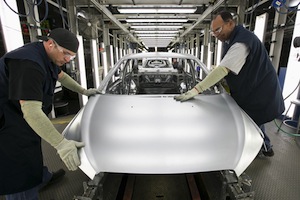 US – The investment will support a new vehicle programme described by the OEM as “unlike any in the plant’s 32-year history”. The facility in Michigan has received $962m since it reopened in 2010 after being idled. GM did not give details, except to say that 300 personnel will be added to the workforce.

“Orion Assembly is a breeding ground for manufacturing innovation,” commented Cathy Clegg, GM North America vice-president of Manufacturing and Labour Relations. “It serves as a model for how to engage the entire workforce at all levels to achieve success. The plant is up to the challenge of building this brand-new product; something it’s never seen before.”

According to GM, Orion has a “unique culture” in which employees proactively problem-solve, with a positive impact on the business. One example is the process monitoring tool for robotic paint applicators that was recently developed by paintshop personnel. The system alerts operators to potential failures before they can happen and is now being applied to other GM sites. The OEM says this preventative maintenance approach will save “millions” in annual costs.

The latest investment comes seven months after the announcement of a $160m expenditure to launch Chevrolet’s Bolt EV. The additional $245m for Orion is part of $5.4 billion that GM is investing in its US facilities over the next three years; around $3.1 billion has been identified, with the remainder to be confirmed by the end of the year.