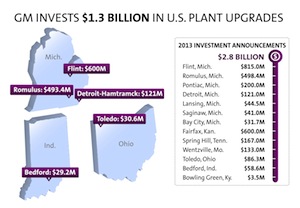 US – The investment will be split between facilities in Detroit, Flint and Romulus in Michigan, Toledo in Ohio and Bedford in Indiana. It is intended to support the production of a new V6 engine, a new 10-speed transmission and an existing 6-speed transmission, as well as funding assembly plant upgrades including a new paintshop and logistics optimisation centre.

Mark Reuss, executive vice-president and North America president at GM, said the upgrades “continue the momentum of a resurgent auto industry”. The investment was welcomed by the union UAW. Vice-president of UAW Joe Ashton described it as “a win for American workers” and “further proof that collective bargaining works”. The investment will create or retain around 1,000 jobs.