From A to Z at Ford Brazil's SBC 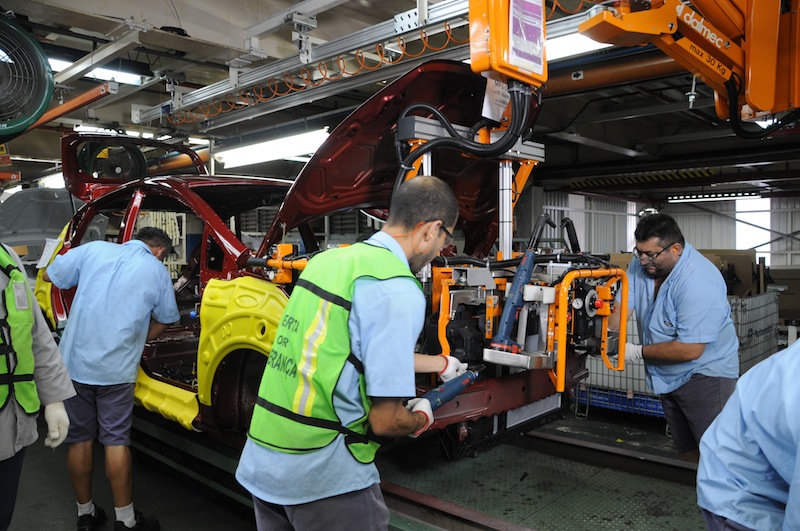 Ford has had a presence in the Brazilian market for 95 years, but it did not begin full-scale manufacturing in the country until 1957, when production of the F-600 medium-sized truck started at Ipiranga in São Paulo State. However, it was the start of operations at nearby São Bernardo do Campo in 1967 which transformed the American vehicle-maker into a major producer in Brazil.

The São Bernardo do Campo plant – or “SBC” in Ford terminology – was acquired as part of the takeover of troubled Willys-Overland do Brasil. The deal meant that Ford also inherited a work in progress based on the Renault 12, which became the front-wheel-drive (FWD) Corcel, one of the most popular compact cars in Brazil during the early 1970s. With the addition of the V8-engined Galaxie in 1967, Ford had a model which became the status symbol of its era in Brazil. Ford felt suitably confident in the future of its Brazilian operations that it then established an engine plant at Taubaté, also in São Paulo State, to supply the SBC complex. Opened in 1974, Taubaté remains one of the three major Ford production centres in Brazil.

Today, SBC has been somewhat pushed out of the spotlight by the newer, larger and more productive $1.9 billion plant at Camaçari, in Bahia State, north-eastern Brazil. Camaçari was regarded as Ford’s model for the future of manufacturing when it opened in 2001 because of the way it consolidated the operations of suppliers with its own production system, making it the company’s most profitable plant worldwide at the time. But SBC remains the home of Ford’s Brazilian headquarters and an important hub in its global operations.

Two plants, one site
In fact, there is not one SBC plant, but two. The car plant will produce around 95,000 Fiestas this year – despite widespread cutbacks in the Brazilian automotive industry to cope with falling demand. The other is scheduled to make 27,000 heavy-duty trucks in 2014. Both factories will supply Brazil plus other leading South American markets, led by Argentina, Chile, Uruguay and Paraguay.

The Fiesta is the second global model to come out of Brazil, following the introduction of the EcoSport at Camaçari, but Ford plans to make its entire Brazilian output conform to its One Ford worldwide strategy by next year. Fiesta production started in March 2013 after a $350m refit of the stamping and paint facilities to increase automation.

The start of Fiesta production was accompanied by the introduction of a new, Brazilian-made 1.6-litre flex-fuel engine. This Sigma TiVCT power unit has dual-valve command and ignition so that it can run on petrol or ethanol, and is the first for Ford in Brazil to be linked to an engine stop-start system. Unusually, the Fiesta is one of the few compact cars in Brazil with an automatic transmission, and is unique in offering a twin-clutch gearbox allowing manual or automatic operation.

The entire SBC site covers just over 1m sq.m, of which around 415,000 sq.m is constructed space. A little under a quarter of the built area (92,000 sq.m) is occupied by truck manufacturing. The car division provides employment for 1,800 people, mostly in stamping and final assembly, while the truck division has 980 Ford employees and 298 working for a partner organisation.

The wider region is dotted with suppliers, 265 of which are local and 14 are ‘imported consolidators’ feeding the plants. Some, like Continental, are located within the site, while others – such as Maxion, which supplies truck crossmembers – have to transport parts almost 300km. For example, the engine for the Cargo extra-heavy truck comes all the way from FPT in Argentina. But most suppliers are much closer. Cummins, which makes engines for light, medium and heavy-duty trucks as well as the F-Series pick-up, and axle manufacturer Arvin Meritor are within 50km; Flama, which builds cabins for the Cargo, is less than 150km away.

The local content of the vehicles built at SBC is around 50% for cars and 75% for trucks. Distribution of completed vehicles is by road or, in the case of some trucks, by sea.

Pressing & stamping for all
The press shop at SBC produces parts for both plants, covering around 36,000 sq.m and employing an all-male workforce of 230 individuals, of whom just 11 are devoted to truck parts. The press shop operates two shifts, but there is a special crew for Saturday and Sunday work.

There are four lines in total, although only one – a high-speed robotised extra-large tandem press bed – is involved in stamping truck parts. For cars, there is also an automated crossbar feed line, a large robotised tandem draw press bed and a similar middle tandem press bed. The operations, which are 54% automated, produce 32,000 car parts and 490 truck parts per day from presses which exert a force of between 440 and 2,000 tonnes.

The stamping shop is responsible for 270 different car parts and 14 for trucks. Die changes are fully automated via a set slide booster and take around six to seven minutes. They occur nine times per day for cars but only once a day for trucks. Four-and-a-half days’ supply of panels is kept in stock racks.

The welding and paintshops at SBC are combined car and truck operations, though with specific teams devoted to each side of the business. The welding lines cover around 50,000 sq.m over two main buildings; painting takes place in a 25,000 sq.m facility. 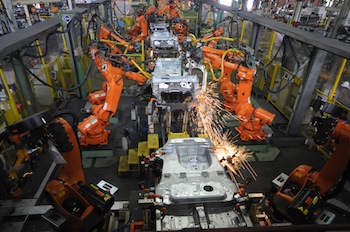 While 600 people are involved in turning stamped parts into car bodies, only a tenth of that figure are employed in welding operations for the trucks. In both cases there is a single shift, 98% male, with automation standing at 66%. Around 60% of spot welds are performed by the 300 ABB S4, ABB IRC5 and Kuka KRC 200 robots which help to complete 468 car bodies and 34 truck bodies per day. A closed conveyor system transports these to the paint area.

Painting is also performed on a single-shift basis, with 250 people involved on the cars side and 20 for trucks. Only about 5% of the staff here are female. It takes around seven hours to apply the electrophoretic first coat, primer (one of four colours), basecoat (six colours) and clearcoat (three colours) before the bodies are ready for final assembly. The bodies are painted in colour batches to minimise the number of nozzle cleaning operations. At SBC, no special measures are necessary to tackle the tropical conditions found in some parts of Brazil.

Separate assembly for cars & trucks
There is just one final assembly line for cars, dedicated to the new Fiesta, in a 37,000 sq.m hall. The line is split into four conveyors – three of around 430 metres to complete trim assembly and one of 440 metres for the chassis. Here, 640 individuals work a single shift – 90% being male. Only around 2% of final assembly is automated, although 200 wired DC power tools, 100 wireless power tools and 20 lazy arms help with heavy or hard-to-reach tasks.

As in other Ford plants, the assembly sequence is: interior trim, instrument panel, glass, exterior trim, seats, doors, engine and suspension, wheels and tyres and fluid fill. The cars then complete rolling road and water ingress tests, and are assessed for squeaks and rattles on the factory’s test track. The entire operation takes around three hours and there is a job rotation plan to improve line flexibility and staff well-being. All cars also undergo torque tests, content inspection and customer acceptance line tests during manufacture as part of quality control procedures. 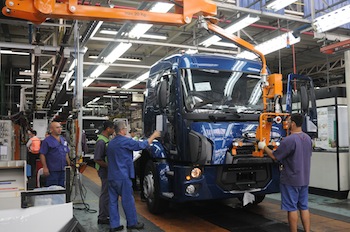 The single truck assembly line is housed in a 92,000 sq.m building which is responsible for producing the Cargo light, medium, heavy and extra-heavy trucks as well as the F-350 and F-4000 pick-ups. More than 300 permutations of these models are available. As with the cars division, the main line is split into one of about 143 metres to look after trim, another of 180 metres responsible for the frame and a third, 211 metres in length, to take care of the chassis. The combined workforce is 960 and is more than 96% male.

There is a single 8.8-hour shift per day, five days a week, operating in the same sequence as that for cars. The only automated process is for applying windscreen glue, although 370 wired DC power tools, 30 wireless power tools and 20 lazy arms are used, and there are special tools for appying the VIN number, frame turning, U-bolt and wheel tightening, engine lifting, adding fluids and aligning wheels. It takes just over three hours to complete the assembly of a truck, and the job rotation, quality control and testing processes mirror those of the cars division.

However, SBC is currently under-utilised. Not long ago, Ford Brazil was helping its parent company in Detroit to atone for huge losses on the balance sheet in Europe; now it is the other way around, as Brazil’s economic problems – along with those of Argentina and Venezuela – hit home. Until Brazilians regain confidence in their economy and have easier access to credit, that will probably remain the case.