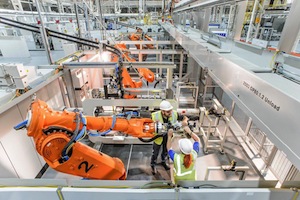 UK – Incorporating £8.9m from the Government’s Regional Growth Fund, the investment will go towards making low-carbon, 2.0-litre diesel engines for passenger cars. This second phase of investment, which follows an initial £287m for commercial vehicle (CV) engines, will create 318 jobs.

The phase one CV engines, developed at Ford Dagenham and Ford Dunton Technical Centre in Essex, are due to start coming off the line at the end of next year and to be installed in Ford CVs from 2016. Capacity will be 350,000 units per year, with one engine being produced every 30 seconds.

The second phase of engine production, for passenger cars, is scheduled to begin in 2017, with first installations planned for 2018. The added capacity of 150,000 units per year will bring total capacity for the new engine range to around half a million units.

“This all-new, state-of-the-art, low-carbon diesel engine has not only been designed and developed here it will be manufactured by Ford in the UK too,” commented Stephen Odell, Ford executive vice-president, Europe, Middle East and Africa. “And it will be great for ‘UK Plc’ as these engines will be exported to markets around the world.”