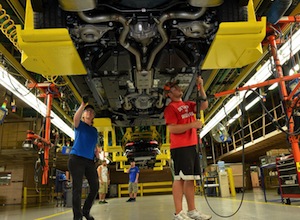 US – The first unit of the new model has now rolled off the line at the OEM’s Flat Rock Assembly Plant, Michigan, in the 50th anniversary year of the original Mustang. With the addition of a right-hand drive configuration, the sixth generation of the pony car will be the first to be exported to markets such as the UK, Australia and South Africa.

The 2015 Mustang features new front and rear suspension systems. The former incorporates a perimeter subframe to stiffen the structure while reducing weight; the latter consists of an integral-link independent suspension. The geometry, springs, dampers and bushings of the rear suspension have all been fine-tuned for the high-performance application. New aluminium knuckles also help to reduce unsprung mass.

There are several options to power the Mustang, with the upgraded V8 joined by a 3.7-liter V6 and a new 2.3-liter EcoBoost engine.

The Flat Rock Assembly Plant, which built the 1 millionth Mustang in 2013, has been extensively renovated in the past year. As part of a $555m investment, Ford has added a flexible bodyshop to allow multiple models to be made on the same line. New technologies have also been introduced, including a three-wet paint process, dirt detection and laser brazing.