Glenn Brooks talks to the man in charge at Ford’s Cologne manufacturing plant to find out what impact the company’s restructuring in Europe has had at the facility.

A Ford veteran of 30 years, as plant manager at Ford Cologne Karl Anton finds himself in charge of a facility running at near-full capacity and producing one of the most popular small cars in Europe, the Fiesta. AMS caught up with him to discuss the changing nature and demographic of the factory’s workforce, the pros and cons of manufacturing just one model and what the future holds for the OEM’s global lead plant.

AMS: What are your overall responsibilities? 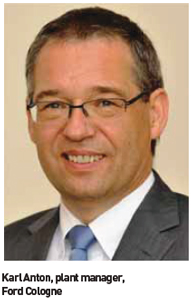 Karl Anton: I am the director of the Cologne site, mainly responsible for vehicle production. The site also has an engine plant, a tool shop and a 50/50 joint venture with Getrag making gearboxes. For the engine plant, I am not responsible for day-to-day production or production numbers, rather for headcount and overall organisation. I report to Dale Wishnousky, vehicle operations manufacturing director for Europe.

AMS: How many vehicles were built at Cologne in 2012?

AMS: How many shifts are you running?

KA: Three shifts on a back-to-back system. It starts on Monday at 6.45am, goes then to 2.45pm, with the second shift lasting until 10.45pm. The last [night] shift ends the week at 6.45am on Saturday. The morning and afternoon shift workers alternate and the night shift is permanent, which is what the night workers told us they prefer.

AMS: What is the current capacity utilisation?

AMS: How many workers do you employ and how many of them are on temporary contracts?

KA: Our headcount at the moment is around 4,500 people and we still have about 150 temporary workers. So we have some flexibility; if production goes up, we can hire more, but if the market contracts we have some room to react. I am quite positive about the rest of the year. I don’t think there is a need to slow the line speed or anything like that.

AMS: Why are you so positive?

KA: First of all, Fiesta has been for many years number two in the European market – by which I mean the 19 biggest markets – and some months we are able to beat the number one, which is the Volkswagen Golf. Now, we are seeing some signs of recovery, particularly for smaller vehicles. 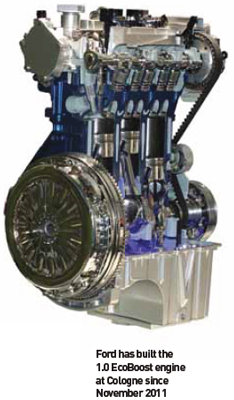 There is still 50% unemployment for young people in Spain and of course their last concern is to buy a new car, but in Italy and France we see signs that the market is picking up and Britain is a fantastic market for us, particularly for Fiesta.

In the first six months of this year, we sold almost as many Fiestas in the British market as we did in all of last year.

AMS: The UK is obviously your top export destination but what percentage of total production leaves Germany?

KA: We export about 80% of the volume, with most of that going to the European market.

AMS: Is Cologne the only European plant now building the Fiesta?

KA: That is correct. Valencia, Spain stopped making Fiesta in 2011. Saarlouis, Ford’s other German plant, makes the Focus. The Spanish plant builds Kuga and C-MAX, and there will be some new products which are to do with the restructuring of Ford’s European footprint. (Genk, which makes the Mondeo, S-MAX and Galaxy, will be closed next year. Also in 2014, the C-MAX will shift out of Valencia and into Saarlouis where it will be made alongside the Focus. The Spanish plant can then be retooled to build the next Mondeo, S-MAX and Galaxy.)

AMS: Does it concern you that since production of the Fusion ended you now have only one product?

KA: As the plant manager, yes, I want a second product. If you do double tooling, where you share products with other plants, you have to make a high investment. So on one hand, if you have just one product you suffer with the ups and downs of the market, but you have to find strategies to react to it.

Temporary workers are one of these strategies. On the other hand, with double tooling – which we used to do with Fiesta here and also at Valencia – the costs are high. Back then, Cologne was maxed out and Valencia was until 2011 what we called the ‘swing’ plant – building additional cars, which were needed when the European market was so much larger than it is now.

AMS: Could a second product be added with a modest investment?

KA: It depends on the size of the vehicle. If it was a B-car or C-car, we could incorporate that as our body shop is flexible – you change the tooling of the robots. The paint shop is also easy as you just reprogram the robots to paint something different. Then final assembly is also not too difficult, so anything that is a B or C-segment size could suit Cologne.

AMS: What investments have been made at Cologne since the start of current Fiesta production five years ago?

KA: We launched the mid-cycle update for the Fiesta in November last year, so there was an investment to give the car its new look, and just a few months ago we started building the new ST, the sports version, which we build exclusively as a three-door hatchback.

AMS: Are there plans to upgrade any areas of the plant?

KA: The paint shop is still a challenge, particularly on environmental issues. We do have water-borne paint that reduces all our VOCs to below 30 right now, but the next big thing is energy saving. At Cologne we have the strategy that is called 3-Wet. This allows solvent-borne paint coats to be applied wet, so there is no need to heat and dry each layer individually, therefore you have a lot of energy savings. 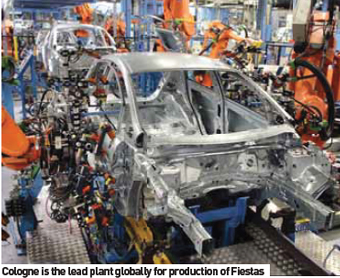 That is one project. Another innovation that we have started driving now is next-generation automated guided vehicles, which are coming this year.

AMS: Cologne was the lead plant globally for the Fiesta. Will that again be the case for the next model?

KA: Yes, Cologne is still the lead plant, so whatever would be next – the mid-cycle update, or as you say a replacement model – we are the lead plant, then comes Mexico or China and so on. We also have what we call the plant Vehicle Engineering Team here. They are responsible for ongoing product improvements, which might be customer-driven or cost-driven; these will then follow in the rest of the world.

AMS: Do you supply SKD or CKD kits to any other plants?

KA: Typically we start with CKD kits, then if the volume picks up – often this is with a JV partner – we start either partial production or move to full production.

AMS: Do you supply any kits to the Changan-Ford JV plant in Nanjing?

KA: No, the Chinese market Fiesta is manufactured there; we don’t ship any kits to them.

AMS: Is it fair to assume that like so many German factories, the average age of your workers is rising?

KA: Yes, that's right. Now, the average age here is 43, so as you can imagine we have had to put a lot of effort into the area of ergonomics.

AMS: What sorts of things are changing to accommodate the needs of a less agile workforce?

KA: People used to crawl into cars to assemble wiring, inner claddings or whatever, but now we do not have one single operation in which somebody has to climb into the car.

So when the car goes to the trim line, the vehicle is placed exactly where the operator can work easily on it to fit the parts in the most ergonomic way. The operator is never running along with the car, he is moving with the car.

Heavy items such as glazing are robotised, also the cockpit insertion is done by robots. Where you put the power pack under the vehicle, this too is done automatically. After this year’s summer shutdown, we will have a programme of automatic wheel assembly, so that is another example of an improvement for the line workers.

AMS: Why not just automate more operations then?

KA: Some OEMs want to automate everything, but we want to keep the knowledge of our workforce, their experience and expertise, together with their knowledge of the Ford Production System.

We don’t want to be always looking to robotise everything because then you have a plant just full of maintenance people. Better to be using the knowledge of your workers to bring new efficiencies to the production process, but automate where it is necessary to do so.

However, body shop is a different animal. There, it is 100% automated as welding is difficult and the equipment is heavy,. The same applies to hinged parts where fingers can be caught by sharp edges.

AMS: You mentioned earlier that you also have some responsibility for the engine plant. Apart from the 1.0-litre EcoBoost, are there any other engines made there?

KA: The three-cylinder gasoline EcoBoost is what we mostly produce but also we build V8 and V12 engines for Aston Martin. Off the top of my head, this is something like 12 or 18 a day. The EcoBoost goes mostly into our Fiesta, but it also is sent to Saarlouis for Focus and to Valencia for C-MAX.

AMS: Do you source any EcoBoost 1.0-litre engines for your Fiesta from Craiova, Romania?

KA: No. This engine is made in Cologne, and as you say, also in Romania, but we don’t take any from Craiova.

AMS: Of all the engines made in Cologne, what percentage of output is retained for the EcoBoost versions of the Fiesta?

AMS: Finally, you’ve had a long career with Ford Motor Company. Is there anything that you would point to that especially stands out as a major change in manufacturing?

KA: I’ve been 30 years with the company; all my working life and in many different departments, almost all in manufacturing. Many things have changed, of course.

One thing in recent years is that now we encourage our engineers to work for two or three days at the plant. At the time of the last new vehicle launch, we put the engineering guys on the line. For them, we find that it makes a hell of a difference if they have this experience. A conversation between the plant folk and the engineering folk can be really beneficial.

Another difference is that it used to be whoever had the loudest voice was the boss in manufacturing, but today you have to have a good technical understanding of what’s going on. People do not just do things because you tell them to. You have to convince them, make them aware of the consequences of why or what they are doing – you have to take them with you to create the best team.